A Leaflet [protesting the execution of members of the Tallion group] 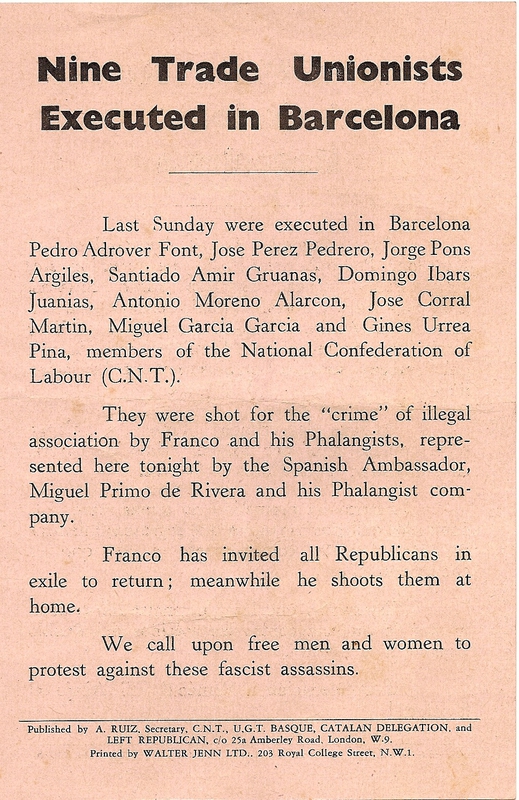 October 1949 saw a series of arrests and murders by the Spanish security forces that dealt a massive blow to the anarchist action groups that were carrying on the fight against the Francoist regime. Miguel Garcia Garcia - anarchist militant, forger and member of the Tallion action group was arrested on the 21 October 1949. On 7 February 1952 he and eight others were sentenced to death.

Awareness of the brutalities of the Franco regime had begun to percolate into Europe by this time and there was some protest against these particular sentences. Well known writers and intellectuals including Andre Breton, Albert Camus, Rene Char, Jean-Paul Sartre and Ignazio Silone protested the planned executions. There was a large protest meeting in Paris on Saturday 23rd February where Camus, Breton, Sartre and others spoke. For whatever reason, on Thursday 13th March 1952 four of the condemned men, including Miguel Garcia, had their sentences commuted to life imprisonment. The other five were executed at 6:15 the next morning, Friday 14 March 1952 in the Campo de la Bota, Barcelona. A last-minute and futile attempt to prevent the executions was made by the British Parliamentary Labour Party and the International Confederation of Free Trade Unions.

Some information about the executed men is in order:

Pedro Adrover Font (El Yayo-[grandfather]) aged 44 was a major figure in the Barcelona anarchist resistance. Sometimes a loner, he had worked with Facerias in a raid on a textile factory in 1947 and in December of that year, a bank robbery. That same year he had placed a bomb in Barcelona cathedral in an attempt to assassinate Franco. Spending some time in France he returned to Spain on 15 August 1948. He often acted as a courier leading militants in and out of Spain from France. On 15 May 1949 he took part in a bombing campaign against those countries who had favored rescinding the United Nations policy of 1946 urging members not to appoint ambassadors to Franco’s Spain. With Facerias and another comrade he planted a bomb in the main lobby of the Bolivian consulate. He also took part in several actions with Francisco Sabate (“El Quico”). He was arrested in October 1949. In his memoir “Franco’s Prisoner” Miguel Garcia Garcia writes about El Yayo’s “nobility of character” (p.31).

Santiago Amir Gruanas (El Sheriff) aged 38 was a guide and member of the anarchist resistance. During the Second World War, working with the French resistance, he had escorted shot-down British airmen, Jews, and French Resistance members from France into Spain. He worked with Francisco Sabate, and helped the badly wounded Jose Sabate escape into France in April 1949. He was arrested in May 1950.

Gines Urrea Pina, aged 56. He fought throughout the Spanish Civil War with the CNT. Pina obtained money from the British Secret Service for providing information about German and Italian activities in Spain, which he used to help his guerrilla group and the resuscitation of the CNT in Barcelona. Pina was an early advocate for the re-launching of armed struggle against the Franco regime.

Jose Perez Pedrero (“Tragapanes” - or bread swallower because he was always hungry!!) was a miner and had been involved in many guerrilla operations with Marcelino Massana in 1949 (hopefully more information on Massana will soon be available in English). Pedrero was born in 1925.

Jorge Pons Argiles (Tarantula) was a farmer and like Tragapanes was involved with the guerrilla activities of Massana. Argiles was a member of the Tallion group, like Miguel Garcia, and had re-entered Spain in 1947. He was born in 1915.

An Appeal to the Public Conscience

After the men were executed there was a large public meeting entitled “An Appeal to the Public Conscience” in London on March 27 1952. Speakers included Herbert Read. The bi-lingual leaflet we reproduced at the beginning of the article, though, is from an earlier rally/protest. We can see that the leaflet talks about “last Sunday” which would place it sometime during the week beginning 17 March 1952, and it appears to have been produced for some event where the Spanish Ambassador to London was present. It presumes that all nine men were executed and it also gets the date of the executions wrong - suggesting it was Sunday 16th March rather than the actual date of Friday 14th March. Such was the constant problem of both retrieving accurate information from Spain and providing support to imprisoned comrades and those acting clandestinely in the interior

The organization printing the leaflet is presented as a broad front of socialist, anarchist, republican and Basque political and trade union groups. Its address is the same as that of the Syndicalist Workers Federation that during this period produced the newspaper “Direct Action” Its secretary was an interesting person in his own right. Acracio Ruiz was the pseudonym of Jose Molina Ortega (1909-1994). Before the Spanish war he was a scaffolder who then fought with the Espana Libre Column and the Espartaco (Spartacus) Battalion. He left Spain on the very day the war ended and, eventually, made his way to London. He became CNT secretary there and contributed to “Direct Action” and “Reconstruccion,” the paper of the Spanish Libertarian exiles in Great Britain. Throughout his exile years he was a constant opponent of those in the exiled Spanish Libertarian movement who rejected action and militancy in pursuit of their ideals

— Looking Back After Twenty Years of Jail and Answers on the Spanish Anarchist Resistance, Kate Sharpley Library: London, 2002 (This is an expanded version of the Simian edition of 1970)

— Unknown Heroes: Biographies of Anarchist Resistance Fighters, Kate Sharpley Library: London, 2005 (many of the pieces in this collection were first printed in the newspaper ‘Black Flag” between 1971 and 1976.)