No war but the class war! Libertarian anti-militarism then and now 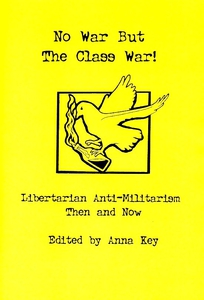 110 years of anti-militarist propaganda, from Spain’s last imperialist adventure in 1893, through the First World War right up to the ‘War on Terror’. It includes Randolph Bourne’s classic analysis of why war is the ‘health of the state’ and a recent dissection of the myths of Remembrance Day. Libertarians have opposed the armed forces as the ultimate prop of the state, a pool of scab labour and the place where the authority principle (orders, not logic) runs rampant. Anarchists have always argued that the alternative to dying for our leaders is fighting for a new world. There’s a brief glimpse of how this looks in practice, from the Ukraine’s Makhnovist insurgents to Spain’s revolutionary militias. Libertarian anti-militarists don’t want the kind of peace that is only a breathing space between wars but peace from below. To get all leaders and bosses off our backs, no war but the class war will do!

Introduction
Down with war! El Corsario (La Coruña) 22 August 1896
The Soldier, Ricardo Flores Magón
To the Conscripts, Gustave Hervé
Insurrection Rather than War, Gustave Hervé
War on War, Mother Earth
Don't become a Murderer! The Revolutionary Almanac
Voices From Prison, Louis Lecoin, Pierre Ruff
War is the Health of the State! Randolph Bourne
The Makhnovists against Red Militarism, The Road to Freedom
Militarism – the end of the revolutionary militias, an 'Uncontrollable' from the Iron Column
Protest or Resistance? 'Mahatma Ghandi'
Remember the Heroes, Anarchy – Northeast Libertarian Broadsheet
Against War and Capitalism, No War but the Class War
Anti-Militarism and Social Insurrection, Willful Disobedience