Mayday and Anarchism : Remembrance and Resistance From Haymarket to Now 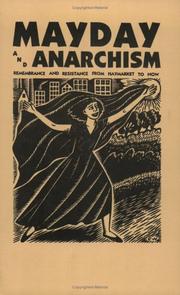 This pamphlet shows the history of Mayday, and the differing ways in which Anarchists have responded to its call. It includes pieces on: The Haymarket affair and its aftermath, The idea of Mayday from the 1890s to the 1940s and Reclaiming Mayday in recent times.

2004 Introduction: Looking Forwards, Looking Backwards
1886 August Spies' Speech at the Haymarket
1886 Trial Speech of Adolph Fischer
1886 Trial Speech of Louis Lingg
1890 Primo Maggio (The First of May), Pietro Gori
1890s Anarchist Mayday: London in the 1890s,  John Quail
1893 Extracts from Altgeld's Reasons for Pardoning the Haymarket Anarchists
1895 A Crime and its Results, William Holmes
1907 The First of May and the General Strike, Mother Earth
1928 The First of May: Symbol of a New Era in the Life and Struggle of the Toilers, Nestor Makhno
1945 May First, Luigi Bertoni
1947 A Cry in the Dark: May Day in Unredeemed Spain, National Committee of the CNT
1973 1886 – First Of May – 1973: A Day of Protest and Social Awareness, Anarchist Groups of Chile
1978 To Latin American Comrades: 1886 – First of May – 1978, Libertarian Latin American Coordination
1983 May Day Leaflet, Reading Anarchists
2000 A Mayday over MayDay, Bash Street Kids
What is Anarchism? A Definition

Mayday Quotes from 'Mayday and Anarchism'

The First of May was a symbol of the international proletariat's struggle for emancipation. Neither military parades nor the 'good little boy' marches of the reformist union federations can blind us to the deep-seated international solidarity of the struggle.
Worker autonomy, direct action — with no chiefs, guides, Great Leaders or Grand Helmsmen, but organized into our own rank and file agencies — will turn the revolutioary movement into a tool for liberation.
CLLA — Libertarian Latin American Coordination

I repeat that I am the enemy of the 'order' of today, and I repeat that, with all my powers, so long as breath remains in me, I shall combat it. I declare again, frankly and openly, that I am in favor of using force....I say to you: 'I despise you. I despise your order; your laws; your force-propped authority.' Hang me for it!
Louis Lingg

But the political hacks have nothing to say about their having been Anarchist Fighters. Our comrades Parsons, Lingg, Fischer, Spies and Engels were not hanged for the 8-hour day that all the world's workers now enjoy. NO! They were murdered for their revolutionary conciousness, for believing in and spreading the ideas of Human Liberation ... They wanted a society of Free men, with neither exploited nor exploiters. That was what they sought and that is what the Chicago Martyrs died for. They wanted the Earth to be man's homeland, with no borders or tyrants, bosses or butchers.
Anarchist Groups of Chile

The First of May 'consecrated to the dignity of labor!' As if slavery could be dignified by anything save revolutionary action. As long as labor remains mere prostitution, selling its producing power for money, and as long as the majority of mankind are excluded from the blessings of civilization, the First of May must remain the revolutionary battle cry of labor's economic emancipation.
Mother Earth

'Hang these men and you kill Anarchy in this country!' shouted Grinnell in his closing speech to the jury. When the capitalistic conspiracy had reached its climax the daily press took up the refrain and cried 'Anarchy is dead.' But the judicial murder of our comrades neither 'killed' anarchy nor abated in the least the revolutionary sentiment. On the contrary, the feeling which theretofore has concentrated mainly in Chicago was by that act diffused more broadly throughout the land, nay throughout the world.
William Holmes