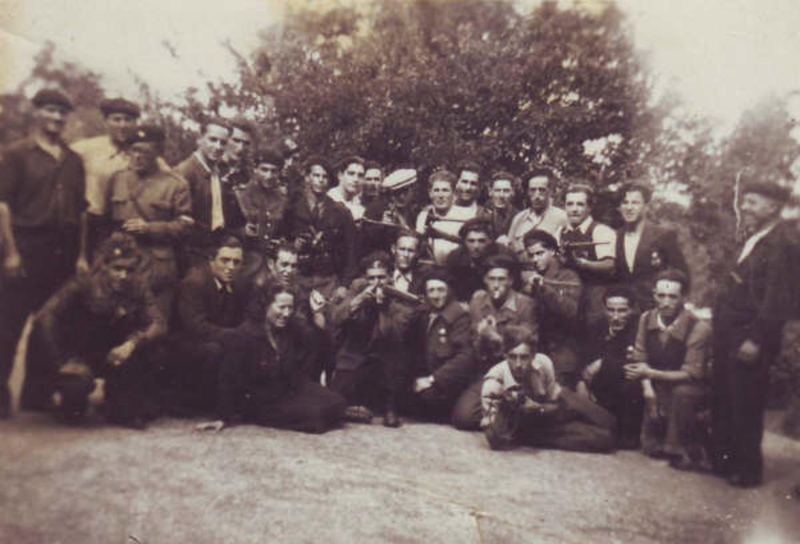 Greetings, readers. After last month’s hiatus on account of various reasons that I need not enter into, here I go again with a fresh contribution on the libertarian resistance in France.

Whenever we talk about CNT units in France that fought the Nazis without being part of the UNE (Spanish National Union), our minds turn swiftly to the Libertad Battalion, the L’Aigle dam or Bort les Orgues maquis units in the Cantal or Corrèze departments, of the KOFRA group or the Malaterre group in the Lot department. It came as a surprise for me to learn that the Libertad Battalion was not the only one raised by the CNT during 1944.

In the Ariège department in southeast France there was a maquis group known as ‘Bidon 5’ which was part of the AS (Armée Secrète, Secret Army), one of the resistance organizations in existence in France. Within that group we find the ‘Del Río Battalion’, made up essentially of Spanish anarchists, albeit that we know also of the presence within it of some socialists plus the odd Italian fighter, libertarian or socialist. So far not a lot of information is available regarding this ‘Del Río Battalion’, insofar as I am concerned at any rate or that I have managed to amass.

For one thing, we can place this libertarian unit between the towns of Cazavet and Couserans in the Ariège department, whereas the main French group was in the nearby, adjacent Haute Garonne department, based in Arbas. The top commander of ‘Bidon 5’ was Pierre Lachaux aka Duclos, who had formed the group in 1944. For his part, Eduardo Vizcaya ‘del Rio’ was the Zaragozan in charge of the Del Río Battalion. We know that this Spanish unit consisted of 146 guerrillas in August 1944 and, as we have stated, that they were for the most part libertarians. The unit took part in various engagements such as the liberation of Comminges in the Haute Garonne department, in the liberation of Saint Gaudens, in the capture of Saint Girons in the Ariège department, in the battle of Rimont, and of the liberation of the Le Vernet concentration camp (a place of ill repute in the memories of anarchists in that, among others, remnants of the Durruti Column were held there behind barbed wire after they crossed into exile in France).

Note, too, that given the PCE being to the fore in the setting up of the UNE as an allegedly antifascist umbrella group, albeit one totally under the leadership of Spanish communists, and that the AGE (Agrupación de Guerrilleros Españoles/Spanish Guerrilla Agrupación)  was the armed wing of the UNE and also under the complete leadership of the stalinist cabal, some Spanish anarchists – who made up the most sizable section of the Spanish exile community – joined the French maquis other than those belonging to the FTP (Franc Tireurs et Partisans) which were tied to the French Communist Party. So they chose to join organizations like the AS (Secret Army) with its Gaullist leanings, essentially as a way of breaking out of the communists’ orbit and oversight.

As mentioned already, we do not have a lot of detail about the ‘Del Río’ Battalion but one thing we do know. We know that Eduardo Vizcaya ‘del Rio’ was in charge of it and that his second-in-command was Miguel Espinar aka Miguel de Almería. And that among the men who banded together in its ranks to fight the Nazis was José Pascual, one of the representatives of the CNT groups within the battalion; plus José Alpuente, Fullola, Antonio Hernández, socialist Miguel Blasco Balfagón and the Italian libertarian Umberto Marzocchi. Later, Marzocchi would serve in the Italian Malatesta-Bruzzi partisan brigade, another libertarian unit, which was among the people who breathed new life into the Paris CNT by stumbling upon the plates used to churn out Spanish currency from a Milan-based printshop … The Paris CNT, then under the leadership of Laureano Cerrada, scurried to travel to Italy to bring back those plates. But that is another story. The Italian anarchist Umberto Marzocchi initially fought in Spain and later in France with the Del Río Battalion and finally with the Malatesta-Bruzzi partisans in Italy.

But the liberation of southern France during the summer of 1944 was not the end of the story. The PCE [Spanish Communist Party], sensing that things were turning in its favour with the defeat of fascism in Europe, issued an appeal to Spanish guerrillas to muster on the Pyrenean border, the intention being to build up the greatest possible number of fighters ahead of its trans-Pyrenean incursions in the autumn of that year. The problem was that a lot of libertarians who had been acting under the aegis of the UNE and banded together into the ACUN (National Union CNT Agrupación) were starting to have misgivings. Besides, the UNE started to bully guerrillas who had been active within other units, or mere exiles, to join with its “Reconquista de España” operation – that being the name given to its operation/invasion. The upshot was that several lives were lost – especially anarchist lives, but also the lives of communists or socialists who showed a reluctance to knuckle under.

Which is where the Del Río Battalion again came to the fore, emerging first in the Ariege department and later in the Tarbes area (Hautes Pyrenees department) where it established itself shortly afterwards as the defender of those exiles who were unwilling to play ball with the UNE.

In fact, during the liberation itself some murky business occurred. On 15 July 1944, in La Casace, a town near Castelnau-Durban, the La Crouzette maquis (within the UNE fold) sent in a squad under the command of El Chato, to burn the home and the libertarian family living there by way of retaliation for anarchist Ricardo Roy’s refusal to join the communists. On 7 August two men from the La Crouzette – Sánchez and Mateo – made their way to Cazavet where the bulk of the Del Río battalion was, in an effort to persuade them into joining the UNE. They had not been expecting that, in the wake of the incidents in La Casace, feelings would be so enflamed, and the matter dissolved into a shoot-out that left the two communists dead. In fact, the CNT, in the wake of all the bullying, was forced to issue a note holding the PCE responsible for many of these outrages and threatening to take armed action unless the threats ceased.

We know that following the liberation of the south of France, the Battalion was based in Saint Gaudens up until 31 August 1944 and later relocated to Tarbes. In early October, delegates from the CNT visited its barracks in order to enforce some order and there were heated arguments with Eduardo Vizcaya, Miguel Espinar and delegates from the CNT groups in the battalion ranks. Furthermore, training and educational matters had been neglected and there was a high proportion of officers to men. Over the months after the liberation, the battalion continue to grow, incorporating lots of libertarian guerrilla drawn from UNE units, until its complement was doubled.

The UNE attempted to monopolize the Spanish resisters in France and thanks to its good relations with the PCF (French Communist Party) and FTP (communist-leaning French partisans) it demanded that all non-aligned Spanish maquis groups or maquisards attached to French maquis groups should enter UNE ranks. It also insisted that all non-compliant units should be disarmed. We know that Eduardo Vizcaya was in negotiations with known Resistance leaders such as Serge Ravanel to ensure no such incorporation into the UNE. In the end, the battalion was formally wound up on 23 October 1944.

As late as 1946, the communist leadership was sticking to its crusade to claim all the credit for the Resistance. On 2 October 1946, the newspaper La République carried a letter signed by José Alonso aka Comandante Robert, insisting that the French authorities refuse any sort of accreditation testifying to resistance activity to Spaniards operating in the Ariège department, other than that issued by the communist commanders of the AGE.
And so, bit by bit, it looked some years later as of only the PCE had stood up to Hitler and his troops. And if we look at the example of the Spanish guerrillas, the story was the same. It seems as if there was no one up in the hills up until the PCE started to dispatch its cadres into Spain (in late 1944 and above all in 1945), other than gangs of badly organized “runaways”. Lo and behold, shortly afterwards those very same “runaways” were being described in papers like Mundo Obrero as Guerrilla Agrupaciones and making Franco quiver in his boots.