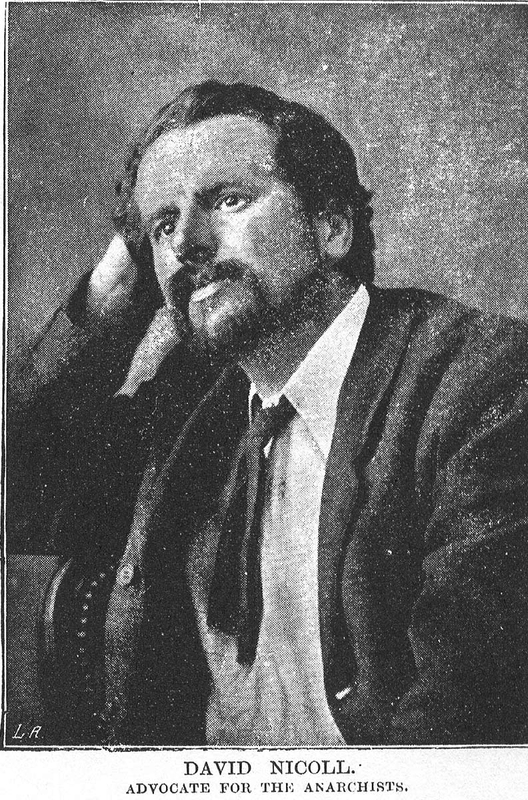 In March 2019 it’s a hundred years since the death of David Nicoll, anarchist speaker, writer, editor, poet and activist. He was a central figure in keeping the Commonweal going after William Morris left the Socialist League in 1890. From 1894-97 he lived in Sheffield, producing the Anarchist single-handedly.[1] Nicoll is best known for his tireless work in defence of the Walsall Anarchists and served eighteen months for an article written in protest at their framing in 1892.

On trial for ‘seditious libel’ at the Old Bailey he said:

‘For my part, I am willing to suffer for my ideas, knowing full well that our friends increase with persecution and I am quite willing to suffer in a good cause. I only tell you that you will not crush the movement by repression. You will only make it more revolutionary and dangerous’

John Quail says ‘This was a brave speech. In defending himself and by this final speech for the defence, Nicoll takes his place among those immoderate heroes and martyrs in the cause of a free press’. The Lord Chief Justice took care to praise Nicoll’s ‘education and force of character’, but as Quail points out ‘praise from such quarters is rather like being given the privilege of being eaten by a crocodile with especially clean teeth’.[2]

This term of imprisonment gave a blow to Nicoll’s natural optimism (‘short and brief shall be the fight’ gives an idea of view of the revolution)[3]. In Chelmsford jail he imagined crowds outside singing the ‘Carmagnole’, becoming something much more disturbing: ‘Swifter and swifter ran the magic tune. Wilder and wilder grew the dance and louder the chant, till it sounded as if a host of witches was keeping Sabbath around the prison. Hell was let loose.’[4]

Worse was to follow on release when those who had taken over the Commonweal refused to allow him back as editor. Conflict with the ‘great and the good’ of the English anarchist movement also helped drive him to paranoia and poverty. Selling his handwritten scrawls, Nicoll ‘gained a precarious living from small sums given to him by comrades who recalled his past services to the movement, or had learned of them.’[5]

Nicoll died on the 2nd March 1919. He is buried in Islington and St Pancras Cemeteries in an unmarked grave No 26, off Viaduct Road in the cemetery. A relative of his would like to mark the spot. Please let us know if you’d like to join us in helping make that happen.

A final word from George Cores who knew Nicoll (in both the good and bad times) looking back at 1886:

‘He had a modest but attractive and persuasive style of address, and always “held” his crowd at an open air meeting. He was already writing his Socialist and Revolutionary songs and a group of young men and women, of whom I was one, used to sing them in Hyde Park at our meetings, there – which used to continue for six or seven hours – and afterwards march in procession along Oxford Street headed by a splendid (real) red flag to Clerkenwell Green or to the Socialist League Hall in Farringdon Road. Sometimes Nicoll was with us, all the time as enthusiastic as the rest.’[6]

Notes
1, Andy Lee’s The Red Flag of Anarchy: A History of Socialism & Anarchism in Sheffield 1874-1900 quotes him on the difficulties of being a Londoner up North ‘And when I try to talk the language of the country, when I say, “reet owd lad. How’s owd lass”, they laugh at me as if I was a Frenchman trying to talk English and say “Get out you blooming Cockney”’ [p157]
2, The slow burning fuse, pages 132-134. Nicoll’s words come from his pamphlet Anarchy at the bar, those of the beak from The Times 7 May 1892. (The official record can be seen at https://www.oldbaileyonline.org/browse.jsp?div=t18920502-493)
3, From ‘The coming of the light’ from Socialist songs (Leicester Anarchist-Communists, 1895) https://www.katesharpleylibrary.net/x69r40
4, quoted in John Quail, The slow burning fuse, page 135
5, Guy Aldred, Dogmas discarded vol.II (Glasgow 1940) p68, Quoted in John Quail, The slow burning fuse page 339.
6, From his contribution to a David Nicoll memorial meeting, reprinted in Freedom, May 1931. Reprinted in KSL: Bulletin of the Kate Sharpley Library No. 16, September 1998. https://www.katesharpleylibrary.net/gxd2xh

[update: you can see Nicoll’s 1892 pamphlet A peep into Newgate (with thanks to the comrade who scanned it for us) at https://archive.org/details/NewgateDavidNicoll]