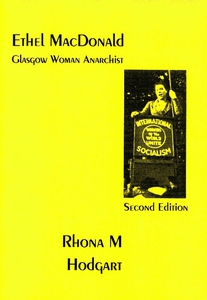 Ethel MacDonald was a comrade of Guy Aldred's who travelled to Spain to support the anarchist movement during the Spanish revolution. As well as seeing the gains of the revolution, she worked as a radio announcer and was a witness to the Barcelona 'May Days'. She helped comrades to escape the growing Communist repression and was herself imprisoned by the Communists. This pamphlet tells her story.