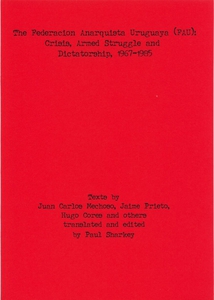 The FAU (Federacion Anarquista Uruguaya), founded in 1956, was one on the strongest anarchist movements in Latin America. In the 1960s, it faced a rising tide of repression which would culminate in the military dictatorship of 1973-85. As legal avenues of struggle were closed down, through the Worker-Student Resistance (ROE) and OPR-33 (People's Revolutionary Organisation) it expanded its tactics to include armed struggle in defence of the workers movement. Banks were raided for funds, and factory bosses were kidnapped in support of workers' demands. After Argentina became a military dictatorship in 1976, many FAU militants there were 'disappeared' in joint repression by the Uruguayan and Argentine armed forces. Elements of the FAU were fundamental in the creation of the People’s Victory Party (PVP). The FAU is still active today.