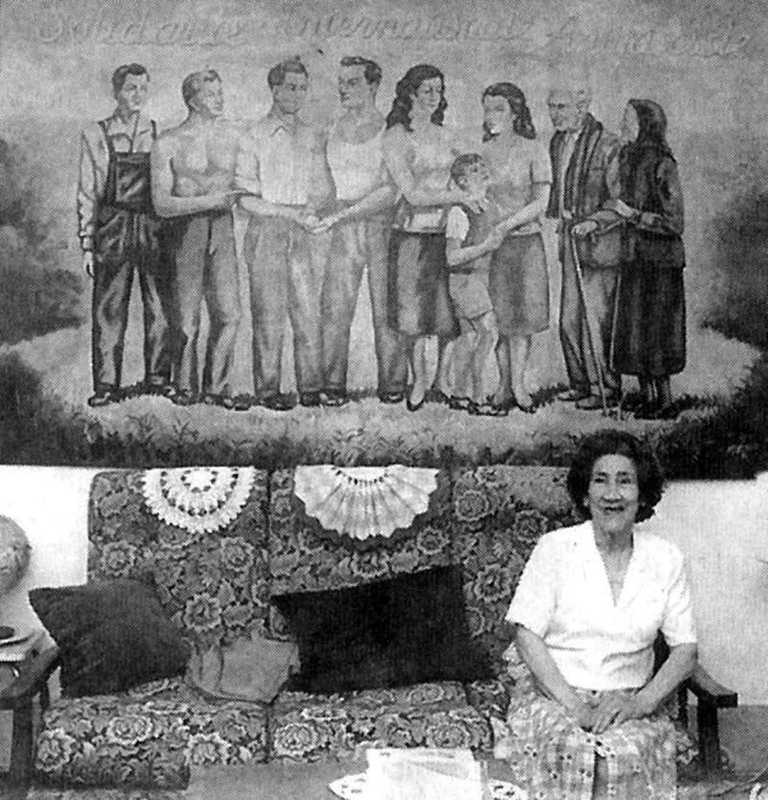 […] Today we look again towards the women and back to our entry for “Women who took up arms”, albeit that our protagonist today was as likely to pick up a pen as a gun.
The woman in question moved like a fish through water, initially south of the Pyrenees, where she was born and raised, but also north of them, when, due to the mass exodus following the loss of Catalonia, she was forced to quit her homeland and settle in France.

So, without further ado, let us get down to brass tacks and introduce a woman who was always linked to the libertarian movement. A woman who neglected neither the written word nor weapons, as she was a poet and a resister. A woman who championed and spread her beliefs right up until the end of her life. Our subject today is María Lozano Molina.
María Lozano was born on 3 March 1914 in Zaragoza, the capital of one of the most markedly libertarian areas in Spain. By the age of 15 she was at home in that atmosphere, in which her family was undoubtedly a help as it ran a boarding-house in Zaragoza. Whether distinguished or unknown, it was normal for a large number of anarchist activists from elsewhere to pass through the premises. Some of the more outstanding ones were members of the renowned “Los Solidarios” gang.

In 1932, following the advent of the Republic, María Lozano married Ángel Mombiola Allué, the love of her life. He had been born in Sariñena on 6 February 1908. And he too was an early entrant into the libertarian world, which turned him into a dyed-in-the-wool anti-militarist. Shortly after that, their daughter was born.

Come the summer of 1936 and reports of an army revolt, neither Maria nor her partner hesitated for a moment. Despite her own anti-militarist feelings, our protagonist fought the rebels on the streets of Zaragoza. After the city was lost and once in Sariñena, María joined the local collective. Shortly after that, Ángel and she both joined the Durruti Column. It should be emphasized that Angel flatly refused to command fellow comrades, male or female: “I don’t want to issue orders to anyone. I want to be a fighter and nothing more.”

After the civil war was lost, the couple left the country. Angel ended up in the Le Vernet camp, set aside for the men from the 26th Division (formerly the Durruti Column). Maria wound up in the Gaillac camp in the Tarn department. I don’t know what Ángel was up to at that time, but we can just imagine and without fear of mistake. He managed to get out of the camp as part of a Foreign Labour Company (CTE). Come the German invasion of France, such CTEs were gradually turning into bands of resisters. Ángel was posted to the Haute Garonne department, the capital of which – Toulouse – was essentially the capital for libertarians in exile in France. In November 1942, the Germans invaded the so-called Free Zone, which up until then had been run by Marshal Pétain’s puppet government. Meanwhile, in the ville rose, as Toulouse was nicknamed, lots of resistance groups sprouted up, including a number made up exclusively of Spaniards. On the one hand there was the 2nd Spanish Guerrilla Division raised by the Spanish Communist Party (PCE), albeit, oddly enough, under the command of the anarchist Joaquín Ramos. On the other, there was the ‘Libertad’ unit, made up almost entirely of Spanish libertarians. But Ángel was in neither of those. He belonged to the Grenada maquis, a mixed French-Spanish unit that fought a few kilometres north of the city of Toulouse and which had the Bouconne woods as its centre of operations.

But back to María, last seen as an inmate in the camp in Gaillac. Once she discovered where her partner was, she did not hang about and escaped from the camp. Dodging Germans and collaborators, she made it as far as Toulouse and later she too joined the Grenada maquis. There the couple fought the fascist hordes up until 20 August 1944. On that day, with Paris in the throes of an uprising, and broad swathes of the south of France liberated by the resistance, Ángel and a couple of CNT comrades – Francisco Aguado and Ricardo García – made ready to bow up a bridge over the Garonne river near Ondes. Caught by surprise by the Germans, they were arrested and later shot.

When the war ended, María settled in Toulouse and took to the hills again, meaning this time to cross the Pyrenees to bring her daughter over into France. What she had never envisaged was that her daughter would refuse to go back with her. Disappointment meant that she got lost in the mountains on the return leg and she had some tough times before she finally stumbled upon a friendly house.

Back in Toulouse once more, María remained active within both the CNT and the FIJL. Large numbers of activists passed through her home. And there was always a welcome for clandestines, on-the-runs and guerrillas. She was particularly fond of and connected with Facerías and used to keep a snapshot of him on top of her TV, in the living room. Another one she had a lot of dealings with was Francisco Sabaté aka El Quico, him and the members of his group. When the Spanish police eventually killed Sabaté, Maria took it very badly, but never relented. In fact, her home was still, years later, a safe house for members of the Iberian Liberation Movement (MIL) – it looks as if Salvador Puig Antich stayed over there – or people from the Internationalist Revolutionary Action Groups (GARI).

Apropos of this time, a text by Jean Marc Rouillan was recently included in a book to mark Facerías’s centenary and allow me to borrow a few illuminating extracts from it:

“María opened the door to us. She, who had joined the maquis and the outlaws when the leadership gave up on the struggle. In retaliation, some awarded her the nick-name la loca (the crazy woman)  … After a welcoming kiss, María used to point us to the chest beside the wall against the kitchen. Like naughty children, we were at sixes and sevens. I opened the top of the chest. My Colt 45 was waiting for me. Cricri’s long-barrelled Llama 90, what he used to describe as his “long-barrelled 10 x 9” was waiting for him. As was Mario’s Herstal GP45.

“We were holding guns from battles and fighters who had gone before us.

“What I remember about María, with her tales of modesty and enthusiasm, was that she had had a fling with Facerías after a libertarian jamboree in Italy. When she returned to Toulouse, he would always drop by to visit her.”

All across Europe the armed struggle was on the wane but María stuck to her guns, backing any fresh initiative and was one of the founders of the CRAS in Toulouse, a centre for research into social culture; she became its chairperson.

Despite the passage of the years, she refused to give ground: she continued attending talks and demonstrations and rallies and was a staunch support of the campaign against the Golfech nuclear power station. She oscillated between activism and writing, poems as well as articles for libertarian publications. Eventually, on Sunday 19 February 2000, Maria passed away peacefully at the age of 86 in her humble apartment in the Rue de Pargaminières.

Anarchist activists in Toulouse saw her off with all the honours that she deserved and erected a plaque on her street dedicated to the woman who was never found wanting. A plaque to the anarchist, the resister, to María Lozano Molina.

By way of a conclusion, here is one of her poems from back in the days of the campaign against the Golfech power station; it is entitled “The Dove”.

A white dove
White as snow went flying
And she wondered:
Where is goodness?
Where is evil?
She paused on an island
And, all alone,
Began to ponder …
Where am I?
What sort of place is this where I have stopped?
Am I truly alone?
Can I live and fly
And think all alone?
And her little brain set her thinking
And she concluded: … No
You must live
And fly and think and proclaim
And demand and protest
In order to rescue humanity from all this inequality.
And, above all, fight
Fight nuclear power
Because it might well
Destroy us
Every single one of us.