A Life for Anarchy: A Stuart Christie Reader out now 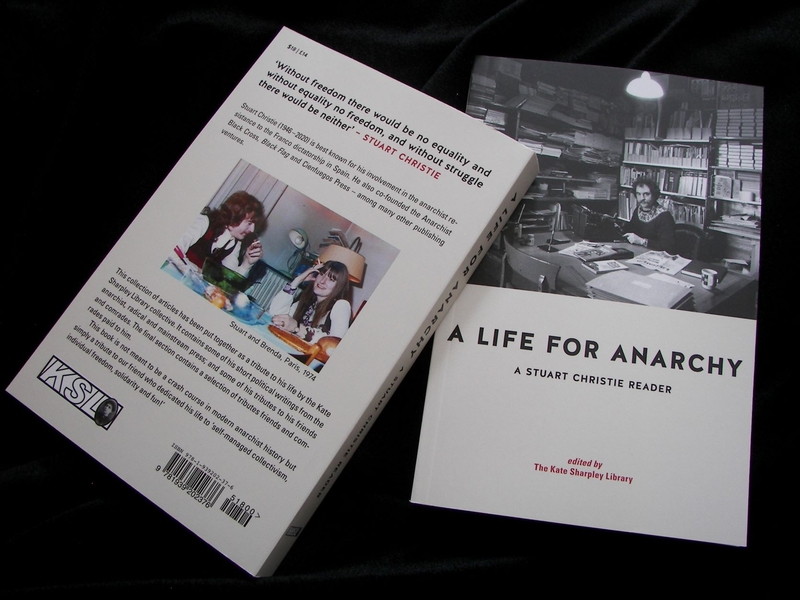 A Life for Anarchy: A Stuart Christie Reader, edited by the Kate Sharpley Library is out now.

Stuart Christie (1946–2020) is best known for his involvement in the anarchist resistance to the Franco dictatorship in Spain. He also co-founded the Anarchist Black Cross, Black Flag and Cienfuegos Press – among many other publishing ventures.

This collection of articles has been put together as a tribute to his life by the Kate Sharpley Library collective. It contains some of his short political writings from the anarchist, radical and mainstream press; and some of his tributes to his friends and comrades. The final section contains a selection of tributes friends and comrades paid to him.

This book is not meant to be a crash course in modern anarchist history but simply a tribute to our friend who dedicated his life to “self-managed collectivism, individual freedom, solidarity and fun!”

‘Every fascinating detail is footnoted, given context, or explained for better understanding. A great warm and inspirational memorial for a brave, thoughtful, passionate, and funny man.’ from the review by the Whistlestop Bookshop (Carlisle, Pennsylvania) https://www.katesharpleylibrary.net/prr6r3

‘We need people who, when needed, do what is necessary; they take up the slack and show others the way forwards by their actions and clarity of thought; they show us how to work and to organise together. We need these “good examples” today more than ever before. I would have to guess here, never having had the privilege of meeting him, but from the accounts of his friends, family and comrades, Stuart Christie was clearly one such “good example”. He was, like so many of those activists whose life’s work he championed, someone whose actions in life inspired others to work towards the creation of a saner, more equitable society.’ from A ‘good example’ by Mark R. https://www.katesharpleylibrary.net/w6mc21

‘There’s a vast amount here that I’d never read before, or if I did, it must have been years ago. Much is fresh and often surprising.’ from ‘A living book’ by Richard Warren https://www.katesharpleylibrary.net/7h4631

‘The KSL editors have done a fine job collating these diverse texts. They also produced a brief and apposite introduction and a series of instructive footnotes that are used with economy and precision throughout. There is also a very handy glossary that will be helpful for younger readers and for those less familiar with the history of the European anarchist movement.’ from ‘Immense enthusiasm and optimism’ by Chris Ealham https://www.katesharpleylibrary.net/98sgvg