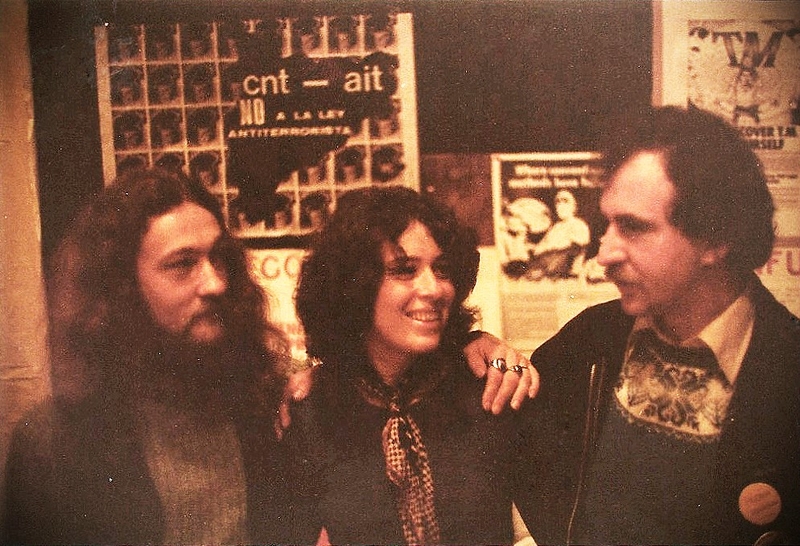 It’s almost two years since the Covid restrictions prevented me – and many, many others – from attending Stuart Christie’s funeral in person. This book provides a degree of solace. The Kate Sharpley Library Collective is to be commended for its industry and astuteness in carefully editing this collection of his writings spanning over a 56-year period. Anyone familiar with Stuart’s life and work will appreciate that this is no mean feat. After his acquittal in the Angry Brigade trial, in 1972, finding himself effectively blacklisted, Stuart threw himself into radical publishing, establishing the Cienfuegos Press, home to the ephemeral Cienfuegos Press Anarchist Review. Along with his close comrade Albert Meltzer, Stuart brought new life to the rather jaded world of British anarchism and reasserted the proletarian values of anarcho-syndicalism. In later life, Stuart founded the Anarchist Film Archive as part of the Christie Books website.

The KSL editors have done a fine job collating these diverse texts. They also produced a brief and apposite introduction and a series of instructive footnotes that are used with economy and precision throughout. There is also a very handy glossary that will be helpful for younger readers and for those less familiar with the history of the European anarchist movement.

Divided into three sections, the first is just shy of 20 texts, ranging from speeches to press articles and book reviews. Each text is preceded by a brief introduction to orientate the reader and provide coherence to the section, allowing a sense of the evolution of Stuart’s thinking. The first part of the book – which covers a range of themes, such as reflections on violence and the dynamics of state repression, taking in the trial of the ‘Stoke Newington 8’ and the ‘Persons Unknown’ witch-hunt of the late 1970s – is a welcome contribution to British anarchist culture and history. (Millennials will doubtless raise an eyebrow at Stuart’s writings in the early days of Time Out, when the publication was far removed from the hipster bible it became.)

Stuart believed in the importance of studying the enemy – one example is his book on Stefano delle Chiaie, the Italian neo-fascist at the heart of the ‘strategy of tension’ of the late 1960s. Similarly, in one article, he references the work of imperialist thug General Sir Frank Kitson, Low intensity operations: Subversion, Insurgency and Peacekeeping, a Machiavellian handbook designed to allow the defenders of a crisis-ridden state to steady the ship in the face of spiralling dissent whether at home or in the colonies. In the UK, this played out with rising state and police repression, the erosion of civil liberties, the one judge conveyor-belt Diplock Courts in British-occupied Ireland and bloated Special Branch resources. The volume also reflects developments within the international anarchist movement, along with key events in Stuart’s activist life, specifically the relaunching of the Black Cross and the unerring internationalism that led to his passionate concern with the plight of Spain. Indeed, the first section ends with Stuart’s preface to We, the Anarchists!, his major contribution to Spain’s revolutionary anarchist history. Showing a keenness to debunk myths – whether this made him popular or not – he charted the bureaucratisation of the Iberian Anarchist Federation and how it came ‘to apply the brakes to the spontaneous revolutionary activity of the rank and file and repress the new generation of revolutionary activists among the Libertarian Youth and the “Friends of Durruti” group.’

The second section consists of a series of obituaries of numerous militants from the British and, mainly, international anarchist movement. These portraits –which serve as important biographical resources– tell much about Stuart’s internationalist priorities: the Spaniards (10) outweigh the British (4) and the Italians (3). These biographies also offer testimony to Stuart’s profound generosity of spirit and his tremendous feeling of loyalty for comrades and loved ones. He was always generous with his time and, moreover, ready both to listen, as well as to offer advice.

Another of Stuart’s core attributes – unflinching humour – comes through in the pages of this collection, even in the most adverse circumstances, such as during his time in Carabanchel jail, Madrid. In his inimitable style, we read how he received a monthly money order from the exiled Spanish CNT in Toulouse: ‘The names of the remitters were, in rotation, George, Paul, John and Ringo, the only English names known to the political prisoners’ support fund, all of which led to the rumour that I had been bankrolled by the Beatles, something which gave me considerable kudos among my fellow prisoners.’

Finally, we see ample evidence of Stuart’s love of language and erudition. I was always struck by the breadth of his culture, whether in his writing or in conversation. We worked together on the English-language edition of José Peirats’ The CNT in the Spanish Revolution for Christie Books. Besides appreciating his qualities as a patient and attentive editor, I was impressed by his literary references, which ranged from obscure Scottish poetry to popular culture; this was always very natural, lightly worn, in no way jarring or artificial. He also displayed immense enthusiasm and optimism. Many of these admirable traits are attested to in the final section, which consists of tributes paid to Stuart by his comrades, friends and loved ones, although the frontiers between these categories were very fluid. This volume is a fitting tribute to someone I was lucky to know and will always remember with tremendous affection.