A living book : 'A Life For Anarchy: A Stuart Christie Reader' [book review] 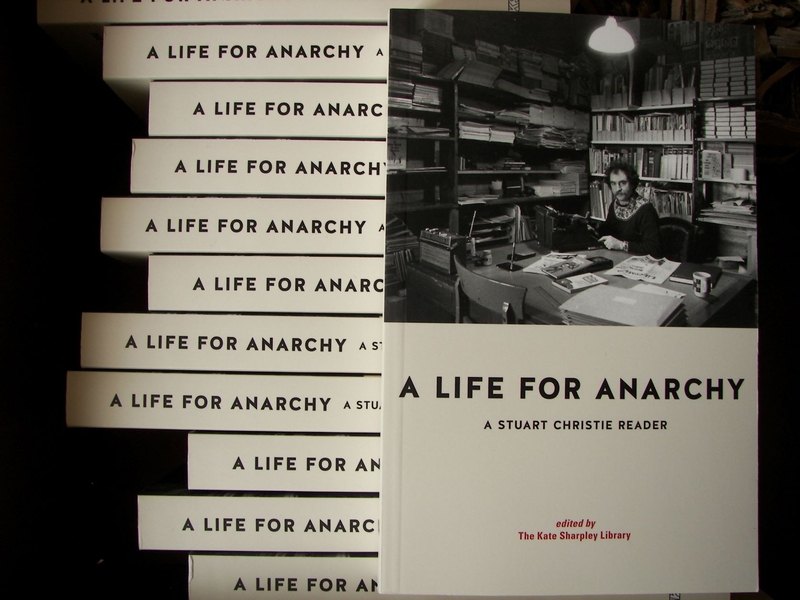 No need here to start by explaining who Stuart Christie was. I almost wrote “is”, for – as one appreciation in this book admits – “It seemed he would always be there”. In this world a few rare folk come across as permanently fixed points of reference, whose removal seems inconceivable, unreal.

This tribute to Stuart is not a linear biography but a great collective compilation, the work of numerous contributors and compilers. The novelist Anthony Powell once suggested that effective spies “don’t suddenly steal an indispensable secret that gives complete mastery of the situation, but accumulate a lot of relatively humdrum facts, which when collated provide the picture.” As creator of The investigative researcher’s handbook, Stuart would have appreciated that point, and this tribute to him demonstrates it well.

A life for anarchy fills nearly 300 pages of varied recollections and original articles, by Stuart and about him. It is sprinkled with some great photos, with a bibliography, a glossary and an excellent introduction. It falls into three sections – a selection of Stuart’s own writings from his Glasgow days onwards, followed by some obituaries and short biographies of others written by him, and rounded off with appreciations of him by friends and comrades, including tributes delivered at his funeral.

And it’s not more of the same. It does not dip into The Christie file of 1980, nor into Stuart’s three volumes of memoirs from 2003-04. Those stand separate and parallel. There’s a vast amount here that I’d never read before, or if I did, it must have been years ago. Much is fresh and often surprising. For instance, who knew about the remarkable and self-sacrificial life of Walter Morrison, ex-soldier, militant pacifist, anti-nuclear protester, community activist and “private extraordinaire in the Awkward Squad”? Stuart tells his story. Nor had I ever heard of Tom McAlpine’s pseudo-co-operative “Factory for Peace”, which Stuart criticised justly and mercilessly in 1964. Nor did I recall José Martin-Artajo, son of a Francoist minister, novelist, poet, CNT “Apache” and eventually both an anarchist and a Spanish diplomat at the same time. Again, his life is here, thanks to Stuart. I could pick other nuggets almost at random.

We might worry that such a hefty patchwork would give an incoherent or unfocused picture, but it isn’t so. The articles by Stuart himself that make up the first section are selected with such care that the trajectory of his political life comes through sharp and clear. If I’d never heard of him, that part alone would give me the necessary framework. And if I’d never met him or had dealings with him, the tributes by him and for him in the two sections that follow would certainly introduce me to the man, not just as a political force but as a person.

In her moving tribute, Stuart’s daughter Branwen speaks of his strength and courage, his unwavering commitment to justice, his readiness to follow his heart, his grace and compassion, his moral compass, his humility. These were close, personal qualities, but they translated directly into virtues that formed his political outlook and drove his tireless activism. As Stuart himself says here, in the last piece in the book, his anarchism was not an imported ideology but essentially “an attitude to life”. Jessica Thorne points out that he developed a growing respect for “the sheer ordinariness of people”, while “MH” remembers him, despite the “big name actions,” as “at heart … very much an everyday anarchist who would get involved in whatever needed doing including the unglamorous stuff as well.” All of one piece, then  – a life for anarchy and an everyday anarchist.

In the book’s introduction, the KSL collective notes that The investigative researcher’s handbook recommends networking with “sociometric stars” – “key people who know everything and everybody” – and that Stuart himself certainly came into that category. Was there anyone in the movement he hadn’t met or didn’t know about? The biographical tributes and obituaries by him, collected in the second section of the book, are written with flair, warmth and sympathy, and are often quite astonishing, opening up to us from his first hand acquaintance the unthinkably brave lives of these militants. His salutes to the artist Flavio Costantini are revealing and touching, as also is his final eulogy here, for his wife Brenda.

The book’s cover blurb insists that it “is not meant to be a crash course in modern anarchist history.” Maybe not, but throughout these pages there is much to learn, and much to be moved and motivated by. A life for anarchy is a proper reader – not a dry memorial, not a dusty headstone, but a living book to keep handy, to dip into repeatedly and to relish. In his review of The Christie file included here, Albert Meltzer complained that “Few political books manage ever to be readable.” Well this one certainly does. It gives us both a closure and an opening, both remembering and renewal, and those who have put it together have done Stuart Christie proud.

A life for anarchy: a Stuart Christie reader edited by the Kate Sharpley Library
Now available from AK Press in Edinburgh https://www.akuk.com/a-life-for-anarchy-a-stuart-christie-reader.html
ISBN 9781939202376 £14 (288 pages with index)