Marcelino Massana, a Wit and Character Right to the Grave 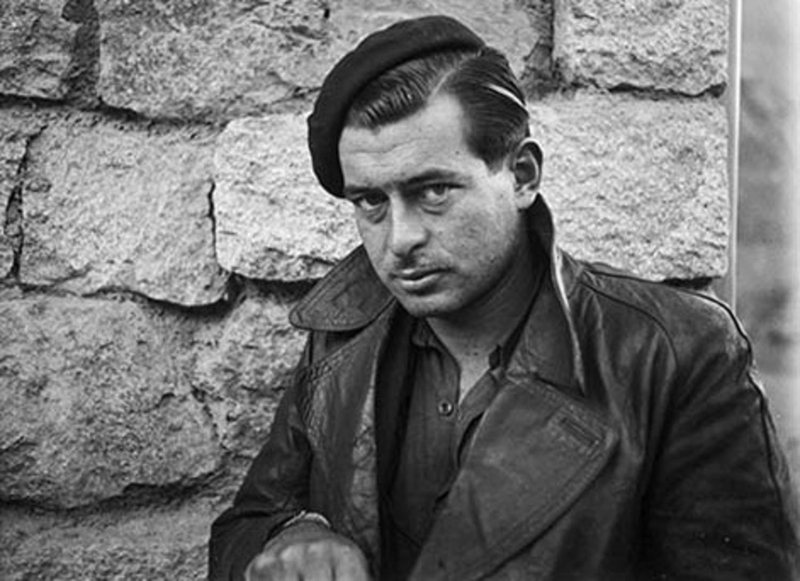 Marcelino Massana left no one indifferent. Besides the part he played in the guerrilla campaign, here we have a selection of amusing anecdotes about him.

I have always had a soft spot for this guy. On the one hand, he was born in the same village as me, in Berga, and above all, so far as I am aware, he was the only group leader who never lost any of his men during his years of activity, between 1944 and 1951. If we consider the losses suffered by the guerrilla bands in terms of guerrillas killed, wounded, arrested and jailed, the story of the Massana group is unprecedented and outstanding.

But in addition to this Massana – also known by the nick-names Pancho, Gordo or Gros – was one of a kind. He moved through valleys in mountains as if he was at home, which is quite something, given that he weighed more than 100 kilos, not that that ever kept him from his work as a guide or as a guerrilla. He liked his grub and was a drinker and, as the saying goes in Catalonia, was really “up for a laugh” as he delighted in fun and sarcasm. During the civil war he was one of the militians from the Upper Llobregat to enlist in the ‘Tierra y Libertad’ Column before moving on later to the Carod-Castán Column.

Once the war was over and after passing through the concentration camps and prisons, in order to dodge pressure from the security forces, he starting doing jobs up in the hills and later engaged in smuggling from Andorra. In the latter task, he could count on the inestimable help of el Borni de Peguera, at whose side he learnt the trails that he would later roam as a guerrilla.

Today, though, in addition to recounting his feats as a guerrilla we are going to devote some space to the anecdotes about him, so let us begin!

Given his mischievous nature, Massana used to brag that he had always been a great skirt-chaser in his younger days, always after the girls. He mentioned that his uncle had also been a great one for skirts, but black ones in his case, which is what made him become a priest. As Massana had refused to wear the soutane, he had serious problems with the family. Amid laughter and banter, he conceded that he would not have made a great priest, what with his fondness for the opposite sex.

We know one story about him from his days as a smuggler, first alongside ‘el Borni de Peguera’ and later with Francesc Comardons and Artur Perpiñá. They say that during that period, the gang was caught unawares whilst travelling from Andorra in the direction of Berga. The automatic reflex on hearing ‘Halt! This is the Civil Guard!’ was to dump one’s ‘bundle’ and take off at speed in different directions. One of the sturdier smugglers took off, bundle and all, and he was the only one whose contraband was saved. It was none other than Massana. Not only did he usually salvage his bundle, but later he took charge of smuggling through and rescuing lots of members of the gang as well as a variety of people in the course of his frequent border crossings.

And so Massana’s reputation spread so widely through central Catalonia that one of his contacts, Josep Piñol, once overheard a mother in Manresa chiding her young son: “Look, if you don’t behave, I’m going to report you to Massana.”

The guerrilla Massana always bragged about his lucky stars where the Civil Guard was concerned. He had only ever been arrested by them once, luckily for him, and that was when he was aged ten, over kicking up a rumpus in the movie theatre in Solsona.

And the fact is that there were a lot of tales about him and the Civil Guards. In the Calle Mayor in Berga, shortly after one operation, he approached a Civil Guard lieutenant to ask him for a light. The officer in question either did not recognize Massana or chose to play along and avoid any issue. In the little mining town of Fígols, he dined with a mixed bag of smugglers, miners and Civil Guards, most of them from Almería. As the guerrilla Antonio Torres Molina aka Gachas was also from Almería and was friendly with several of the miners and smugglers seated around the table that night with Massana and his comrade, the evening passed off pleasantly and without incident.

If we look at the testimony of Jesús Martínez Maluenda aka el Maño, a good friend of Massana’s and himself a libertarian guide, every bit as cautious and wary as Massana, whom he affectionately referred to as el Gordo, we have another juicy story that mentions Civil Guards.

In the town of Balsareny there was a café that Massana liked to frequent: he was on very good terms with the owner of the establishment who would also keep him briefed about the police and Civil Guards. One day Massana was drinking coffee with another three or four people in the café when a stranger entered; they quickly realized, he and his fellow customers, that this was one of the Civil Guards recently arrived in town. Understood. The stranger went over to the table and starting asking for information regarding Panxo (Massana). The conversation went like this:

Stranger: Is it true that an individual by the name of Massana frequents this place?

Massana: Sorry? What are you doing coming here looking for information about Massana or anybody else for that matter? Who might you be? If you are police, you’d need to show authority from your superiors. How come you are not carrying a pistol? And if you were to run into Massana or somebody from his group, what are they going to do with you, if they learn you are a policeman? Because you are police, right?

Massana: Then look here, you have no right to just show up like this. If Massana was here he’d put a bullet into you. Not to kill, now; he’s shoot you in the leg and then they’d haul you up in front of a court martial for letting yourself be wounded by a maquis.

Now, job done?  Got the information you were looking for?

Stranger: But I haven’t received any information.

Massana: Then off you go back to your barracks, the officer there can fill you in.

The nervous Guard then turned on his heels and stepped outside into the street, with el Gordo following.

Stranger: Sure. Don’t pull my leg. Massana would have wanted to kill me.

Massana: You’re wrong there. I am Massana.

Stranger: Of course you are. You’re pulling my leg because if you were Massana you wouldn’t be telling me, or you’d have found some other way of telling me.

Which is how matters were left, each man going his own way. When the Guard got back to barracks, he mentioned the incident to his officer and the officer pressed him for a description. The Guard replied that the fellow was tall and well-built, speaking in a mixture of Catalan and Spanish. His commander’s reaction left him stunned:

The best known anecdote concerning Massana happened in Berga. A brand-new Civil Guard captain was assigned to the post in Berga, the capital of that comarca. One of his missions was to stamp out the guerrilla campaign and finish off the notorious Massana.

One day, at the Colón café, after coffee and a chaser, he stepped up to the counter to settle his bill. Whereupon the waiter said that the captain’s bill had been settled. Startled, he asked who had paid it. The owner stated that it was the well-built fellow who had just left; he said that his name was Marcelino Massana and he said that you were old acquaintances. The officer was seething and cursed and swore that he was going to catch that brazen malefactor. But things did not stop there.

During those years, the folk from the areas near Andorra used to listen in to Radio Andorra. A couple of days after the captain’s ‘treat’, the audience was surprised and reduced to laughter. Not all of them, of course. The compere dedicated a song to the Berga Civil Guard – “Wait for me in Heaven” by Antonio Machín. The record was requested by one Massana.

There are lots of anecdotes about the guerrilla. There was a story that he had been sighted near Sallent dressed as a priest, that in Quer Foradat he had helped a “monsignor” friend of his to say Mass; that he had secured a mule for a peasant, free of charge; he had given the peasant the cash to buy it with, and then Panxo stole it back from the dealer. That he had made an employer who had misused his female employees in La Plana parade around in his underpants … we could go on.

And to finish off, many years after Marcelino had hung up his guns, we find that Massana had not lost his sense of humour. When José María Reguant wrote a book back in 1979 outlining the guerrillas’ memoirs, the publishers invited both men to the ‘Mundo’ literary awards. On arrival they were assigned to the same table as the likes of Manuel Cruells or Heriberto Barrera. A renowned photographer approached Massana to ask him for a photo: “Señor Massana, I’d like a shot of you shaking hands with the host”. To which Panxo replied: “Sorry lad, but it’s the same distance from here to the host as it is from the host to here”, making it plain that he was not prepared to leave his seat to greet the “host” who was sitting at an adjacent table.