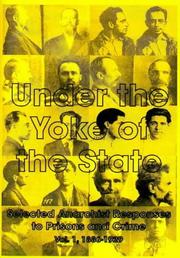 This pamphlet offers personal reflections from anarchists about time spent behind bars and critiques of the prison system from the Haymarket frame-up to the Sacco-Vanzetti trial. It gives direct testimony on the treatment of prisoners in numerous penitentiaries, WWI internment camps, and Bolshevik jails. It also presents many viewpoints on how capitalism's exploitation is society's greatest crime and how anti-social acts would be treated in a truly free and just world.