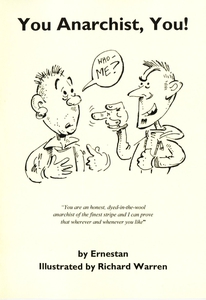 Ernestan (Ernest Tanrez, 1898-1954) was a Belgian anarchist, and began writing for the anarchist press in 1921. You Anarchist, You! is one of his post-war agitational works, written in a conversational style and aimed at convincing his readers that anarchism, far from being strange or frightening, actually matches what they already see and think about the world.
Illustrated by Richard Warren, introduction by Nick Heath. Richard Warren is an occasional anarchist illustrator best known and loved for his 'Ann & Archie' series in the Cienfuegos Press Anarchist Review.