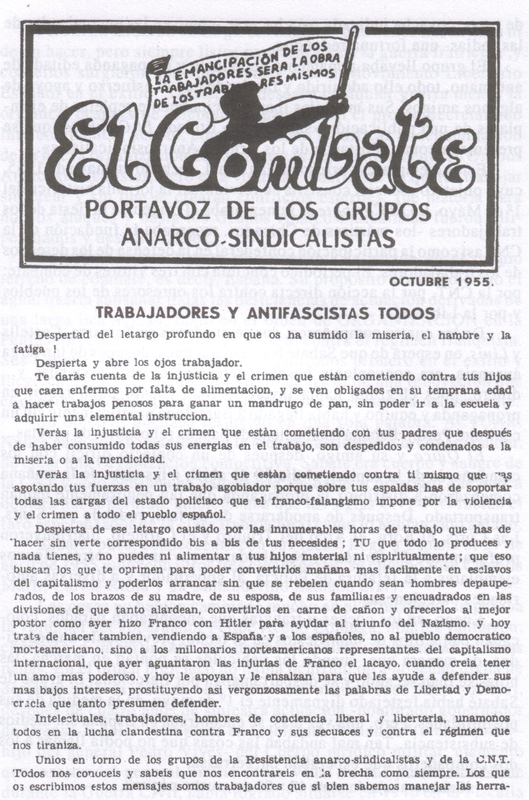 VOICE OF THE GRUPOS ANARCO-SINDICALISTAS

ALL WORKERS AND ANTIFASCISTS

Wake up from the profound lethargy into which wretchedness, hunger and weariness have plunged you!

Wake up and open your eyes, worker.

You will realise the injustice and criminality being visited upon your children who are falling ill from want of sustenance and compelled, even at their tender age, to carry out demanding work just for a crust of bread, unable to go to school and receive a basic education.

You will see the injustice and criminality visited upon your parents who, after spending all their energy on their work, are sent packing and condemned to poverty or beggary.

You will see the injustice and criminality visited upon yourself who, having exhausted all your energy on wearisome work because you have to carry on your shoulders the full brunt of the police state that Franco-Falangism imposes upon the entire Spanish people by means of violence and criminality.

Awake from the lethargy generated by the countless hours you have to toil without having your needs catered for: YOU who are the producer of everything and who have nothing, unable even to sustain your children materially or spiritually; which is what your oppressors want so that tomorrow they can make them capitalism’s slaves the more easily and, once they have been reduced to grown-up paupers, wrench them away from the arms of their mother, wife, families and marshal them into the divisions whose praises they sing, turning them into cannon fodder and hawking them to the highest bidder just like Franco did yesterday to Hitler in order to further the triumph of Nazism and which he is trying even today to do as well, by hawking Spain and Spaniards, not to the democratic American people but to the US millionaires who represent world capitalism, and who only yesterday could not find insults enough for its lackey Franco, when it thought it had a mightier master, and which today supports and praises him so that he will help it defend its baser interests in a shameful prostitution of the words Freedom and Democracy which they purport to champion.

Intellectuals, workers, men of liberal and libertarian sensibilities, let us all come together in the clandestine struggle against Franco and his henchmen and against the regime that rules us through tyranny.

Rally around the anarcho-syndicalist Resistance groups and the CNT groups. You all know us and you now that we will always be in the breach. We who write you these messages are workers who, whilst we are adept in the handling of tools .. [PAGE STOPS HERE]

From: the cover of El Combate found at http://www.diagonalperiodico.net/blogs/imanol/grupo-quico-sabate.html. Translated by: Paul Sharkey.

In KSL: Bulletin of the Kate Sharpley Library No. 77, January/February 2014