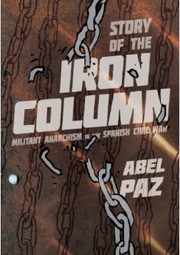 The members of the Iron Column were among the most notorious anarchists in the Spanish Civil War. They were intransigent in the face of the fascist revolt, but also in defence of the revolution's gains.

"We say to all workers, to all revolutionaries, to all anarchists: At the front or in the rearguard, wherever you may be, fight against the enemies of your liberty and demolish fascism. But also make sure that your exertions do not bring about the installation of a dictatorial regime that would represent the continuation, with all of its vices and defects, of the whole state of affairs that we are trying to obliterate. Now with weapons and later with the tools of labour, learn to live without tyrants and to develop for yourselves the only road to freedom. These are the feelings of the Iron Column, and they have been explained clearly and simply.
"Comrades: Death to fascism! Long live the social revolution! Long live anarchy!" (The Iron Column, 1 October 1936)