Iron Column: Testament of a revolutionary 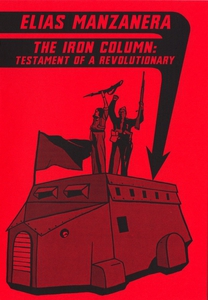 Elias Manzanera helped to set up the Valencian anarchist militia unit, the Iron Column, to unleash social revolution against the military and fascist revolt of July 1936 which began the Spanish Civil War. The Iron Column was the most intransigent and most maligned of the anarchist militias. Manzanera served on its War Committee and here remembers both its achievements, and his comrades who fell fighting, not only against fascism, but for anarchy.

“[Manzanera’s] attitudes stand in sharp relief. First, he has an intense pride, both in his association with the Iron Column and in the place that he comes from. Secondly, he expressed the firm, almost puritan idealism which drove him and so many of his comrades: bourgeois society was on the way out and the new one would have no need of bourgeois vices. His language comes from another time when ‘manhood’ meant ‘dignity’. Now we would say ‘Do the right thing.’

“Finally, he has the bitter tone of someone used to being lied about. The people in arms had defeated the military revolt but the republican bourgeoisie and their Communist Party allies campaigned ceaselessly against the revolution. The Iron Column was one of their favourite targets. In the language of power, Communists destroying collectives and killing peasants were ‘restoring order’ – anarchists defending them were ‘uncontrollables’. For anyone unwilling to come out and say ‘I believe in power and I want my snout in the trough!’ it’s always a good trick to divide your anarchist opponents into impractical idealists or criminal opportunists. But the Iron Column were neither ‘bandits’ nor ‘saints’. They were revolutionaries who knew who their enemies were. For that reason, their long and painful odyssey is worth studying.”
From the Introduction.

Introduction: The Iron Column and the Spanish Revolution
Dedication
Acknowledgement
Profile of the author
Prologue
Touring Valencia
The fascist revolt
An entire column
The Salesian convent [July, 1936]
The make-up of the Column
Formation of the War Committee
Leaving Valencia for the Front
Reaching Barracas
From Barracas to Sarrión
The Battle of Sarrión
On to La Puebla de Valverde
Searching for and capturing the wretches misusing the Column's name
In Puerto de Escandón
What our young men wrote in the newspaper
Glimpses of La Puebla
The sort of thing the young people wrote for our newspaper Línea de fuego
In Puerto de Escandón
Manifesto
Report
Deservedly remembered
The victory belongs to you, Galileo
A fraternal libertarian message
Epilogue