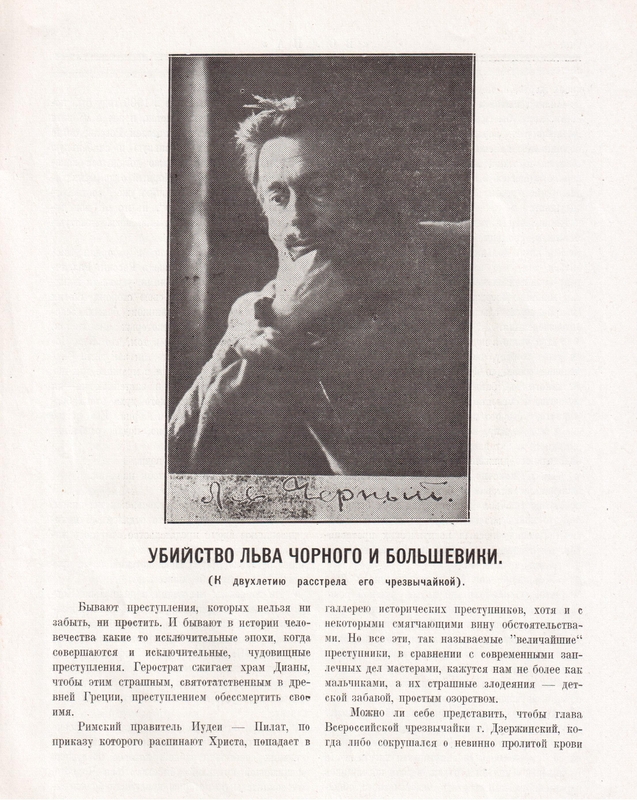 Lev Cherny was the alias of Pavel Turchaninov (1878-1921), Russian anarcho-individualist intellectual and activist who joined the anarchist movement circa the first Russian revolution of 1905-07, and most prominently served as the secretary of the Moscow Federation of Anarchist Groups in 1917-18. He joined the so-called ‘underground anarchists’ involved in clandestine struggle against the Communist authorities, and was executed on September 21, 1921 by the Cheka in Moscow on charges of counterfeiting.

The following obituary was published as an unsigned article in Volna (The Wave), the monthly journal of the Federation of Anarcho-Communist Groups (Federatsiia Anarkho-kommunisticheskikh Grupp), a US-based Russian anarchist group. After the Palmer raids, Russian anarchists operated in the USA clandestinely, and Volna did not list an address or editorial contacts. Translated by Szarapow.

There are crimes that cannot be forgotten or forgiven. And there are some outstanding epochs in the history of humanity when outstanding, monstrous crimes are committed. Herostratus burns down the temple of Diana to make his name immortal by this crime, terrible, sacrilegious in ancient Greece.

The Roman ruler of Judea – Pilate, at whose order Christ was crucified, makes his way to the gallery of historical criminals, although with some mitigating circumstances. But all of these so-called “greatest” criminals, compared to today’s executioners, seem no more than little boys to us, and their terrible atrocities are like a child’s play, simple mischief.

Can one imagine that the head of the All-Russian Cheka Mr Dzerzhinsky ever repented about innocently spilt blood of his victims and, like his Roman colleague Pilate, tried to at least calm down the pangs of conscience, at least by Pilate’s hand-washing? If any hints of consciousness that this beast lacks would have appeared in Mr Dzherzhinsky, then the head of the All-Russian Butchery would have strangled himself, or ordered to have himself executed by the firing squad for a display of such faint-heartedness.

The inquisitor and sadist Dzerzhinsky, along with Lenin, Trotsky, Bukharin and other apostles of knouto-Bolshevism,[1] can truly be proud that Lev Cherny was tortured and killed in the Cheka torture chambers by their mean hand. Dzerzhinsky’s execution machine has killed him cowardly, insidiously, treasonously, covering up the traces of the wicked deed committed.

After strangling its victim in a Moscow Cheka basement, the Bolshevik government in passing reported in the official press about the execution of some “bandit” Turchaninov, not having bravery and daring to say that it killed Lev Cherny, who was known to all of Russia, and is now known to the entire world as an outstanding philosopher-anarchist and an active participant of the Russian liberation movement.

Of course, no one believed the story about banditism and common-criminality of Lev Cherny invented by the Bolsheviks. It was clear to all that the new authority simply settled its scores with one of its dangerous political adversaries and removed him out of the way by a treasonous shot to the back of the head.

Bolshevik leaders knew Lev Cherny well long before the first Russian revolution [of 1905-07] through his literary works in which he, with nearly photographic precision, painted today’s rulers of Russia in the very same light in which they’d shown themselves after taking power, i.e. heartless, bloodthirsty tyrants, inquisitors, murderers and gravediggers of liberty.

In his book “Associational Anarchism” [1907] Lev Cherny speaks of state communists with abhorrence and loathing, comparing them to a “pack of dogs with their tails tied together”, and their leaders, with a knout in their hands, as cattle drivers of the human society that they turned into a herd.

If Lev Cherny was of such opinion about communists back in 1905, and caustically and venomously attacked the would-be rulers of Russia, then comprising a small and weak band of politicians, one can only imagine what was Lev Cherny’s opinion about the Communist generals who obtained “power corresponding to their teeth”, and what he could think of these knights of the torture chamber, knife, club and bullet.

The Bolsheviks decimated and devastated the mass anarchist movement in Russia. By various enticing promises, threats and tortures they lured to their side many of their political adversaries – white, green, blue and even some anarchists.[2] They were, however, certain that Lev Cherny cannot be bought or frightened. Wandering through prisons and exile in the dark days of Tsarism, torture and suffering in the Cheka torture chambers could not break the rebellious spirit of this fearless revolutionary and fighter. He could only be killed. And deceitfully, nefariously, brigandishly

Under the black cover of the night

The executioners shot you in a cowardly manner…

The crucifixion of Christ, as we know, involved a traitor. In that remote, uncivilised time treason was considered such a disgusting deed that, historians claim, Judas Iscariot hung himself because of self-contempt.

It was quite dissimilar in the Lev Cherny case. In it, several heirs to Judas Iscariot appear in eager rivalry to betray their victim to the Cheka for a reasonable price. Shteinerov, Zekhtser, “the chauffer” and a whole host of other, as yet unknown provocateurs, are putting up their spiderwebs to catch their victim all the more assuredly and better.

By the hands of these rascals, the ill-fated case of forging worthless Soviet roubles was contrived, serving as the official reason of the murder of Lev Cherny. This dubious story was invented by the Bolsheviks to hide the true motives of this political murder.

Why the Bolsheviks killed Cherny was because he was too popular amongst the labouring masses of Russia: Bolsheviks knew and feared Cherny as the organiser of the Black Guard, as the inspirer of the seizure of the mansions, and most of all they feared his pen, murderous for the Marxist scribes and pharisees, his fiery word, unceasing propaganda of anarchist ideas which shook the foundations of Bolshevism.

Cherny and the Bolshevik tyranny, as two opposites, could not live side by side.

By killing Cherny, the Bolsheviks thought by this to strike a fatal blow to anarchism. Their calculations, however, did not come to pass: Lev Cherny was killed, thousands of other anarchists and revolutionaries were tortured and murdered in the torture chambers of the Cheka, in prisons and exile. But anarchism, which the Bolsheviks buried and performed last rites for, which was driven underground, chained in heavy irons, was still not strangled, not crushed by the dictatorship of “proletariat”, but is alive, and, breaking through the wall of government obstacles, is bursting through and carries the new message, new revelation to humanity wretched with suffering, about how to have done with the world of evil, violence and exploitation, how to create on Earth a free society without authority, without the knout, without the Cheka, without gallows and executioners.

Very few anarchists even in Russia had the opportunity to read L. Cherny’s book “Associational Anarchism”, published in 1906 [1907] in a limited number of copies. Although this book is rare in Russia, there could be no talk of its reissue when L. Cherny was alive. But the terrible news of Cherny’s murder comes, and “Associational Anarchism” is immediately published in America as a protest against the barbaric Bolshevik villainy.

Now this book is read by thousands of people (many of whom never heard nothing about Cherny or about anarchists in general), they decipher this book written in blood, soak up every line in it, every word, and at the same time they think of what kind of a Tartar “worker and peasant” government that kills people like Lev Cherny, who give all their powers, their life and genius to fight against evil, violence and injustice.

Did the “clear-sighted” Bolshevik politicians think that by their act of murdering Lev Cherny they would create thousands of new anarchists, and, consequently, instead of one political adversary – thousands of new fighters, who would wage an even more gruelling battle against the Bolshevik tyranny?

Has the Bolshevik government won much from the murder of Lev Cherny?

We somehow fail to notice it being thanked by the proletariat whose guardian it is. Lev Cherny was the best friend of the toilers, oppressed and enslaved masses, and all of their sympathies are without a doubt on the side of the tragically perished fighter. The Bolshevik government bashfully avoids this unpleasant subject and guiltily keeps silence as it knows that only damnations can be the reward to traitors, murderers and stranglers of the Russian revolution.

Maybe the Bolsheviks have created communism, socialism on the bones of the murdered and tormented revolutionaries and on the rivers of shed human blood? You are utterly wrong, dear reader, if you think so. The villainess destiny has played an evil joke at the expense of the Russian revolution: communists in Russia have declared communism to be counter-revolutionary. The very same people who in the name of triumph of communism were ready to massacre all of Russia are now cutting off heads and crush all those who dare to speak of communism.

Now, you see, Russia is being run in a different way: the commissars, disappointed with communism, have declared the NEP [New Economic Policy], or, to put it mildly, bourgeoisified and returned to the bottom of the capitalist ladder. Russia is at present an interesting sight: in the “commune” estates the red landlords, often the estates’ old proprietors, are lording over the poor peasants, who as before work as farm labourers and crouch their back to the gentlemen.

At the factory, the lord is the red industrialist whom the Soviet power cares for, protects, tends, and fattens by government subsidies, so that he would better exploit the worker and drive him hard.

The village is made destitute by taxes, by endless exaction by the commissars. The peasant has been robbed blind; the Soviet power is taking the last shirt off of his back, seizes his last piece of bread and forces him into chronic starvation and cannibalism…

Russia has been turned into a new Golgotha on which the long-suffering country is being crucified by a band of armed rascals. All of the so-called Bolshevik experience is nothing but butchery on a mass scale. There really are reasons to go insane, if presence of sanity could have been discovered in the commissars’ heads. It’s not for nothing that a rumour circulates that Lenin has gone bonkers after some conscious reflection of what a mess he made by his Bolshevik experiment.

There is one more means that can delay the inevitable fall of the Bolshevik tyranny, and it is the assistance of foreign capital, the concessions. But the foreign capitalists got burned assisting the Russian tsars. By their loans they did not save the throne and lost their capital. There would hardly be anyone willing to lend the Bolsheviks money abroad.

Bolsheviks are edging closer to a fateful climax. They cannot count on assistance from the outside nor for the support of the labouring masses in Russia that they enslaved and ruined. Their sole support are the bayonets and the Chekas. There would be more victims, streams of human blood will be shed but the Bolshevik tyranny will fall under the weight of its crimes and bloody deeds. The people will rise up and finish with the Bolshevik tyranny. And only an anarchist revolution will finish the world of evil and oppression, destroy authority, and then the era of unlimited freedom will commence.

2 There was a relatively small-scale and obscure anti-Bolshevik insurgency in 1920 which operated in two districts of the Chelyabinsk Region known as the Blue Army. The author is referring to the large spectrum of forces that made their peace with the Communist regime.