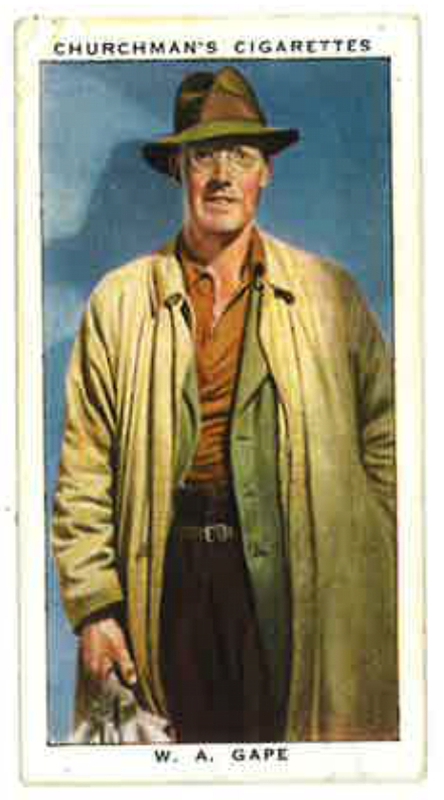 Bill Gape became a tramp in 1914 when he ran away from home as a fourteen-year old. He was on the road in Britain. Canada, the USA and South America from 1914 until about 1930 when he returned to England where was instrumental, that year, in forming the “Hoboes Union” which later became the “National League for the Abolition of Vagrancy”. The idea of a creating a union owed much to his experiences riding the rails with Industrial Workers of the World members in Canada. For some time afterwards Gape became somewhat of a London celebrity. He was dubbed “The Tramps Q.C” and even had his own cigarette card in the Churchmans’ “In Town Tonight” cigarette card series. He was a member of the second Anarchist Federation (founded in 1940) until he resigned in 1942/43.

The book begins in 1914 with the narrator running away from home. Within hours he enters the world of the dispossessed – a world of dirt, exhaustion, hunger, perpetual physical discomfort and casual and deliberate cruelty on the part of officials in casual wards where the tramp stays. It is a world he will be part of for some time and the book does not shirk in describing with graphic detail – both the people he meets and the circumstances he finds himself in. At times it reads as much a historical documentary on tramping and vagrancy as it does an autobiography. An old tramp gives Bill a history of English vagrancy laws and numerous statutes concerning vagrancy are reprinted in the text. Such an approach though does not hide the emotional and physical challenges of Bill’s life but serves as a convenient comparison between official charity and the incidental kindness of ordinary people. It is the latter who provide real charity as far as Bill is concerned. They are “the many men who do such kindly acts without publicity” (52) – cooks and waiters returning home late at night who have bundled up food to give out or printers in Fleet Street offering sandwiches to the starving tramps. Bill also experiences the kindness of other young boys who have been tramping longer than he has. A kindness that often mitigates the horrors of tramp life as well as anything can.

There is no such kindness in any of the casual wards Bill experiences. In them is thoughtless cruelty, disgusting food, flea- and rat-ridden blankets and demeaning and pointless work. It is a relentless rhythm of misery with the occasional glimmer of humour thrown in. Two women bring Bill comfort and solace during these years. The first, Kate, he meets early on in his days on the street. She looks after him employing him as a collector of the money as she works as a “chanter” (street singer). She offers him kindness and a domesticity missing from his own family. Her arrest, as a result of mean-spiritedness on the part of her neighbours, removes any safety net between Bill and a life of tramping. The second woman, Alice, becomes his partner and companion who introduces him to sex and, very importantly, the understanding of what a free woman is. She says to the confused Bill, “Don’t you see that even if you were legally tied to me I would not let you have relations with me unless I was willing, so it isn’t a matter of legality but of inclination.”(167) Alice educates him about life and people and he is the richer for that experience.

The world of the tramp, however, is not a world conducive to permanent relationships. Acquaintances come and go, moving in different directions on the road. People are regularly arrested or die through a potent mixture of poverty and illness. The life of the tramp is essentially a solitary one. Eventually Bill stowaways to Canada and there meets an organization that cares about and supports the tramps and hoboes that ride the Canadian rails. Bill joins the Industrial Workers of the World. Of the IWW Songbook he writes, “I enjoyed reading the songs, for they expressed in verse the same feelings that moved me. Every line of these songs shouted revolt against tyranny and oppression.”(306) For a time his loneliness is eased as he recognizes that others have had similar experiences and feelings to himself. He is part of something bigger.

This is a book well worth reading. There are some powerful scenes – apple picking in Wisbech, laying under a deluge at night in the New Forest or the tension of being a stowaway on a passenger ship to Canada – that grip the reader emotionally and, if the writing is often jerky and awkward it is always worth persevering with. There can be no doubting the authenticity of what you are reading – an authenticity created by the use of contemporary slang that was used in everyday tramp interaction. The casual use of words such as  “funkum”, “jake” and “skilly” signal that we are entering a closed world rich with its own language and culture with a complexity that is still disturbing and challenging eighty years or so after it was written. “Half A Million Tramps” constantly articulates the tension between what an individual tramp may feel to be their rights and what charity, religion and the state decide these rights actually are. In his world, Gape suggests, organized charity can prove to be a cruel and mean thing that suits the power of the giver more than the rights of the receiver.

[The W. A. Gape cigarette card can be seen at https://www.katesharpleylibrary.net/zcrmb6]