The Anarchists in Paris, May-June 1968 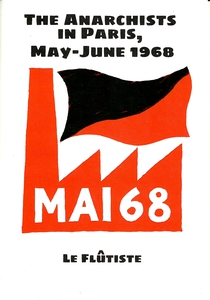 An anarchist eyewitness to the revolt of May-June 1968, Le Flûtiste ("the flute player") looks back on the highs and lows of Paris' student-worker rebellion. Topics covered include, student life before the revolt, the barricades of the Latin Quarter, the student and worker occupations and strikes and the part played by the anarchists in the upheaval.
"Having been hit by a grenade and come under gas attack, I had made up my mind to join the demonstration at Denfert-Rochereau. ... First I watched as the head of the demo paraded past, made up of trade union bigwigs and their henchmen; then came heaps of more or less unknowns such as the Situationist Guy Debord whom I spotted on his own, just him and a friend. Then, all of a sudden, my eyes were treated to the unbelievable spectacle of a forest of black-and -red flags, with a sprinkling of black flags! ... The public's curiosity about and interest in anarchist ideas was born right there and then. Anarchy, which the Stalinists and socialists generally - not to mention the bourgeois - had declared a dead duck in the land of Utopia, was rising like the phoenix from the ashes! Its burial licence had expired, to the great annoyance of all those respectable folk."