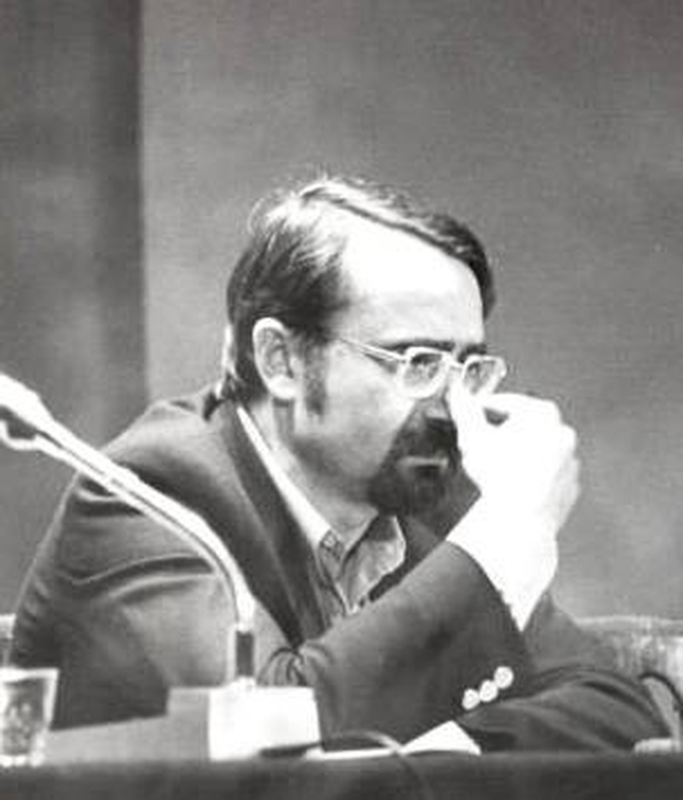 Another fine comrade gone! Just heard the news that Amedeo Bertolo, a friend and comrade since May 1968, a pivotal figure in the Italian and international anarchist movement, passed away this morning (22 November [2016]) in Milan. Amedeo was, with others, including Giuseppe Pinelli, a founding member of the Ponte della Ghisolfa anarchist group, the Croce Nera Anarchica and its bulletin which later became the glossy monthly ‘Revista A’, and countless other anarchist and libertarian initiatives and actions over the years. One such spectacular action was the 1962 kidnapping of Franco’s vice-consul in Milan, Isu Elias – the first political kidnapping since the war. The abduction was in response to the sentencing to death in September ’62, in Barcelona, of young Spanish anarchist Jorge Conill Valls for anti-Francoist activities. Earlier that year Amedeo had been involved in Defensa Interior’s actions inside Spain with Conill Valls.

The kidnapping dominated the front pages of the international press for days and triggered a campaign of anti-Francoist solidarity that brought considerable pressure to bear on the Franco regime at several levels — from street demonstrations to the ‘humanitarian’ intervention by Cardinal Giovanni Battista Montini, the future Pope Paul VI (1963-1978). Conill’s death sentence was commuted after three days to one of thirty years imprisonment and Isu Elias was immediately released.

His kidnappers were quickly identified and jailed. The last of these, Amedeo Bertolo, who had fled to France, spontaneously and quixotically surrendered himself at the courthouse just as the trial in Varese opened. The trial itself was covered by much of the Italian press as an indictment of the Spanish fascist government rather than of the actions of the young Italian anti-Francoists.

On 21 November all the accused were found guilty but received only nominal sentences. For Bertolo (the sentence was six months imprisonment for the kidnapping and 20 days for unlawfully bearing arms. The judges, presided over by Judge Eugenio Zumin, recognised that the accused had ‘acted on motives of particular moral and social import’ and all were found blameless and released on parole.

In the early summer of 1969 Bertolo and Pinelli told me they were concerned about the neo-fascist-false-flag provocations (known as the ‘strategy of tension’) that were then taking place across Italy under the aegis of (although we didn’t know it at the time) of Federico Umberto D’Amato, the head of the Confidential Affairs Bureau of the Italian Interior Ministry and elements within the NATO Intelligence Service and the Greek KYP (Central Service of Information). Leslie Finer, the Observer’s Greek correspondent, had published extracts from a extraordinary secret document he had obtained from his contacts among the exiled Greek opponents of the colonels. These extracts seemed to confirme their worries and I was asked to try to obtain a copy of the full report.

The dossier, compiled in May 1969 by an Italian-based Greek secret service agent of the KYP (the Central Service of Information), was sent originally to Giorgio Papadopolous, then president of the Greek council of ministers (and a CIA asset). It reported on the results of the Greek-funded terrorist campaign mounted in Italy in 1968 with the assistance of various Italian fascist organisations, along with ‘some representatives from the Army and the Carabinieri.’

On 15 May Michail Kottakis, head of the diplomatic office of the Greek foreign ministry forwarded a copy of the document to Pampuras, Greece’s ambassador in Rome. The report speculated on the chances of success of a right-wing coup d’état as a result of the escalation of the ongoing terrorist campaign. It also assessed the activities of Luigi Turchi, an MSI (fascist) deputy and a Mr P, possibly Pino Rauti, but, more sensationally, it referred to the problems they had faced with regard to the bombings at the FIAT stand at the Milan Trade Fair and the central station and why they had been unable to do anything prior to 25 April. It was as clear an admission of guilt as one could hope for; it also referred to a major escalation of terrorist actions should Greece be expelled from the Council of Europe.

The contents of this dossier were obviously of great interest to the Italian Black Cross for the defence case of the six anarchists who had been charged with these offences and were then being held in San Vittorio prison.

Leslie Finer gave me a copy of the entire Greek dossier which I forwarded immediately to Pinelli and Bertolo in Milan. But the magistrate, Antonio Amati, refused to admit the dossier as evidence in the case and the six remained banged up until they were finally acquitted on 28 May 1971 — two full years after their arrest. The real perpetrators of the 25 April bombings — and the August 1969 railway bombings — were Franco Freda and Giovanni Ventura, two neo-fascists and Italian secret service agents both of whom were finally sentenced in 1981. They each received 15-year prison sentences for their part in planning and carrying out the bombings.

On Friday, 12 December 1969, four bombs exploded in Rome and Milan. One of these, planted in the Banca Nazionale dell’Agricoltura in the Piazza Fontana in Milan, exploded a little after 4.30pm, claiming the lives of 16 people and wounding 100. Another, in the Banca Nazionale del Lavoro in Rome, injured 14, while two planted at the cenotaph in the Piazza Venezia wounded 4. It was a day of massacre — a state massacre as it turned out. For Inspector Luigi Calabresi of the Milan Questura and his boss Antonio Allegra there was, again, no doubt that anarchists were responsible.

Of the 100 or so anarchists arrested that night and the following day, 27 were taken to San Vittorio prison, the rest being held for interrogation in Milan police headquarters in the Via Fatebenefratelli. Among those held were a number of Anarchist Black Cross (CNA) members, including its secretary, Giuseppe Pinelli. After more than 48 hours in police custody the 41-year old railwayman was taken to Calabresi’s room for questioning late in the evening of 15 December. The police officers present were Luigi Calabresi, Vito Panessa, Giuseppe Caracuta, Carlo Mainardi, Pietro Mucilli and Carabinieri lieutenant Savino Lograno.

Around midnight, Aldo Palumbo, a journalist from L’Unita was having a smoke in the courtyard when he heard a series of thuds. Something was bouncing off the cornices as it fell from the fourth floor. He raced over to find the body of Pinelli sprawled in the flower bed. According to the duty doctor Nazzareno Fiorenzano he had suffered ‘horrific abdominal injuries and a series of gashes on the head.’ The autopsy showed that he was either dead or unconscious before he hit the ground. A bruise very much like that caused by a karate blow was found on his neck.

Amedeo Bertolo, who was at the Milan Questura that night, was at the forefront of the 25-year campaign to clear Pinelli’s name. On 13 March 1995, after more than 25 years and countless court cases and appeal hearings, 26 Italian neo-fascists and secret service officers were finally indicted for their involvement in the Piazza Fontana massacre.