The Die-Hards and Their Activities Relating to Trans-Pyrenean Invasions 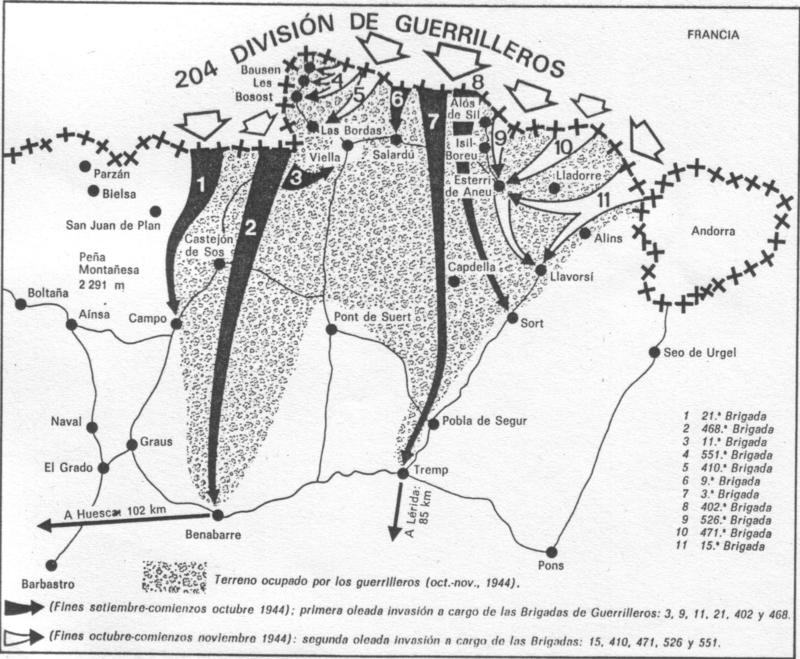 Part three of the Die-hards series. Our focus this time is on those who in late 1944 took part in the famous trans-Pyrenean invasions that eventually finished up in the Valle de Arán.

No better way of waving goodbye to what somebody in these parts has called this odd year than part three of Die-hards. Those who fought in the civil war and in the French resistance and subsequently against the Francoist dictatorship. Whilst part one dealt mostly with Ponzán’s people and other guide teams and doctors who helped the guerrillas and the resistance, part two focused on the action groups. Now we turn to the largest group, made up of those who, after two wars, crossed the border, especially in the autumn of 1944, heading south, in the course of the “Reconquista de España” operation, the so-called trans-Pyrenean invasions, or as they are popularly known, the Valle de Arán invasion.

For those unfamiliar with the subject, we should say that after the liberation of the south of France over the summer of 1944, in which Spanish guerrillas had played a more than prominent part, the leadership of the UNE (Spanish National Union), a supposedly pluralistic but essentially PCE-led body mobilized its thousands of guerrillas for a move on the Spanish border. The plan was to establish a bridge-head in which to set up part of a Spanish republican government, in order to compel the allied armies to move against Franco. The guerrilla forces, following lots of diversionary operations right across the Pyrenees, would mount a central attack on the Arán Valley. That location was selected as it was the only Spanish territory on the northern side of the mountain range. At the time, the sole access to it was via El Port de la Bonaigua, at a height of more than 2,000 metres and the UNE’s commanders were hoping that snowfall might help cut off that pass. The current Viella tunnel was under construction at the time and not in operation.

What was behind this hare-brained scheme? First of all, the reckoning was that as the Spanish exiles had been such a help in the fight against the Nazis, the Allies would lend them a helping hand by way of a reward. Secondly, the reports passed on by the smuggling team brought out of Spain were misconstrued, a feeling being created that the civilian population would rally round the guerrillas, when in actual fact in the interior of Spain there was nothing but terror and hunger. Finally, and thirdly, there was huge enthusiasm after their having beaten the Nazi army and this had led them to over-estimate their strength. In addition, guerrilla tactics were cast aside in favour of trying to operate like a regular army, when they had neither artillery nor other battle resources. Munitions were scarce, as were provisions and revictualling was left to improvisation.

The upshot was as anybody might have expected, failure. From early October onwards, infiltrators began to cross the length of the Pyrenean range, trying to stretch out the bulk of the Francoist forces. The main attack was mounted after 19 October, by then centred on the Aran Valley. A few days later, the invasion’s military commander, López Tovar, ordered the guerrilla units to withdraw in the wake of the failure to capture Viella and the massive influx of Francoist forces into the valley. Later on, Santiago Carrillo claimed the credit for issuing that order.

Following that short exposé of the would-be invasion, let me move on now to a list of anarchists who took part in it and who had previously fought in the civil war and in the resistance. Here are today’s die-hards:

José Abad aka el Maño :during the civil war he served on the Aragon front as a militian and during the French resistance had served in the Picaussel maquis, before later taking part in the Pyrenean invasions, albeit that we do not know with which unit.

Jesús Aragüés Garcia served in CNT units during the civil war before crossing into France where he served in the Bager d’Araudy maquis in the Lower Pyrenees. He took part in the Pyrenean invasion with the 570th Brigade which made its incursion via Ordiceto.

Martin Arnal Mur from Angüés finished off the civil war serving in a fortifications and trench-digging unit despite his youth. During the Second World War he served with Grupo 11, operating in the Upper Pyrenees area. As for the post-October 1944 invasion, he crossed over as a guide in the Upper Aragon region. Among other units, he served with the 570th.

Juan Berrocal Padilla from Antequera served in the 14th Mixed Brigade. In exile he fought in the Royan pocket before finally crossing over into Spain as part of the Andalucia II group.

Leonardo Brusau Sanz served on the Aragon front as a militian and, following the withdrawal, fought in the French resistance as part of the ACUN (National Union, CNT Grouping), with the 21st Brigade. He took part in the invasion, entering Spain via Upper Aragon.

José Casa Torrents served in Spain with the 23rd Division; in France he served in the Fades de Riom viaduct maquis, before entering the Arán Valley, albeit that we do not know with which unit.

Gregorio Castarlenas Amello was active in the POUM and the CNT and during the civil war served in the Durruti Column. In the French resistance he served with the Grand Combe groups in the Gard department “as part of the 21st Brigade, he crossed into Spain via Upper Aragon along with Brusau.”

Manuel Continente (hijo) served in army construction units, having been turned away from the Durruti Column as he was under-age; his father and four of his uncles were serving with the Column. He fought in the resistance with one of the libertarian units in the Haute Garonne and finally took part in the invasion, unit unknown.

Emmanuel Cortes Linares was a militian with the Roja y Negra Column in the civil war, During the Second World War, he fought in the Laffleche maquis in the Tarascon area. Which unit he was with in the Pyrenean invasion, we do not know.

Santiago Flores Sánchez aka Cariñoso de Gredos served in the Durruti Column and later joined the UNE units in France and in 1944 he and a team of comrades headed for the Sierra de Gredos to set up a base; he was arrested in 1946.

Pedro Flores Martínez aka el Malagueño, marched off to the front lines with the Tierra y Libertad Column. In the resistance in France he served with the 35th Brigade that fought in Gers and that unit took part in the incursion via the Roncal Valley.

Vicente Fontanet Gombau fought with the Durruti Column as part of the Utrillas dynamiter squad. Under the Nazi occupation he was in the Aveyron department where he joined the 9th Brigade. With that same unit he would take part in the Arán Valley incursion and more specifically in the fighting around Salardú.

Antonio Gayarre Ciprés was a militiaman on the Aragon front. His resistance service was in the Aveyron department where he served with the 9th Brigade. He crossed into Spain with that unit, subject to orders from a group under the command of Antonio Téllez and fighting in the Salardú district.

Moisés Lago Lorenzo aka Comandante Lago. He spent the civil war fighting in Galicia until he managed to escape to France. During his time in France, he joined the ranks of the UNE, taking part both in the anti-Nazi resistance and in the Pyrenean invasions after that.

Ventura Márquez Sicilia served as commissar with the 60th Division in the civil war. In France he fought in the Cantal department. We do not know the unit with which he took part in the Pyrenean invasions. Some authors have him on record as a socialist.

Serafín Martín Font. We have little information about him, other than that he fought in the 186th Division in the civil war. We do know that he served in the French resistance and in the Arán Valley, but we have no information as to units.

Crescencio Muñoz Hernández. Which unit he served with on the civil war fronts in Spain, we cannot say, but once he crossed into exile, he soon enlisted with the 3rd Brigade operating in the Ariège department. Later, during the invasions, he happened to enter Spain via Andorra, albeit that he was injured in a rockfall en route.

Gabriel Pinós Regalado served with the Roja y Negra Column at the age of 15. Later, in France, he was a maquisard with the ‘La Vapeur’ group in Savoy and finally a guerrilla (unit not known) in the Pyrenean invasions.

Ángel Rodríguez Gordillo served during the civil war, first as a militian with the Andalusia Column and later with the 48th Mixed Brigade. In France, he was a maquisard with the 3rd Guerrilla Brigade in the Ariège department and he took part in the Arán Valley fighting as part of that same unit.

Miguel Sanz Clemente aka Chispita took part in the fighting in Madrid during the civil war. In France he belonged to the 1st Brigade operating in the Eastern Pyrenees and he later joined the incursion via Navarra. He got as far as the Levante region where he fought up until 1947.

Antonio Téllez Sola aka Tarra, the great chronicler of anarchist guerrilla activity preached by example. His participation in the civil war was minimal, as he was only called into the ranks in January 1939. Whilst he made little contribution inside Spain, he made up for this in France where he very quickly joined the ranks of the resistance in the Aveyron, where he served in the 9th Brigade. His participation in the Pyrenean invasion was with that same unit.

This is a very short list of anarchists who took part in the civil war, the resistance and the Pyrenean invasions. To take but one example, let it be said that under Antonio Téllez’s command a team of about twenty libertarians fought in Salardú; most of them were drawn from the 9th Brigade that had fought the Nazis in the Aveyron department. Many of them fought in the war in Spain, albeit that I have no information confirming that, but for anybody interested, here are a few of their names:

Today’s article has highlighted only three names from that Brigade, so you can just imagine what the total number of die-hards might have been. Maybe some day there will be enough for a couple of entries.

Likewise, the list of anarchist members of the National Union (UNE) in its Agrupación Cenetista is a long one and many of them were active in the civil war as well a in the incursions, so it is a certainty that as more information comes in there will sooner or later be a part four … take it from me … Meanwhile, I wish you good reading and that 2021 turns out better than the year drawing to an end. Salud!