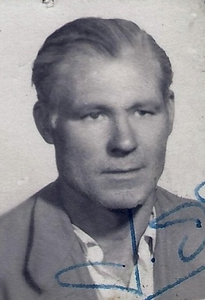 Q. Who was this Josep Alomà?

A. Not the sort of person to go unnoticed. He stood out physically (being imposingly tall and athletic and, in his later years, his having impeccably combed white hair). Alomà was one of those people about whom everybody agrees that they radiate life and an itch to shake things up.

Q. How did he first come to know about libertarianism?

A. Through his older brother Pau and from intimate knowledge of the circumstances in which their father died. And from meeting up later with people like Ascaso while he was doing his military service in Zaragoza: that was crucial too.

Q. He was very well known in Tarragona as a militant, but wasn’t he an outstanding sportsman as well?

A. He was into athletics, football, swimming, Greco-Roman wrestling This was a spin-off from the anarchists’ notion of a rounded education, a notion he imbibed from the classical sources.

Q. His brothers were activists too, so much so that when it comes to telling stories about them, there is a bit of confusion as to precisely which of them was involved.

A. In actual fact they made up a team and the Alomà brothers were very popular on account of their daring and commitment. . All three were up to their necks in social struggles against injustice and for emancipation.

Q. How did the CNT stand in Tarragona at the time of the fascist revolt?

A. Unlike Barcelona, where the CNT was overwhelmingly in the majority, in Tarragona city it was the UGT that had the most members. This was in part due to the structures of local society, the slightness of industrialisation and the support the UGT had received during the Primo de Rivera dictatorship. However, the CNT was strong in construction, the railways, the docks and particularly strong among the peasantry and the miners in provincial Tarragona.

Q. What part did Josep Alomà play when the time came to protect the region’s artistic inheritance from his position as head of Tarragona Corporation’s Department of Culture?

A. His involvement went deeper than merely being vice-chair of the Cultural Works Confiscation Committee. He surrounded himself with a very good technical team with people such as Ignasi Mallol, Joan Rebull or Pere Batlle. It should be pointed out that he faced down the mob and saved Tarragona cathedral from being torched and its artistic treasures from being destroyed. [It was also through his efforts that the Cistercian monasteries in Poblet and Santes Creus were spared looting and arson].

Q. What other duties and activities did he get involved in during the Civil War and the Revolution?

A. He served as cultural member on the Tarragona Antifascist Committee and later headed the Department of Culture and was first deputy to the mayor, promoting access to culture for working class people by means of scientific and social movie-screenings, revolutionary plays, opera and classical music concerts, adult education, drawing workers into sports and then there were the activities at the Ateneo Libertario where he was chairman. As director of the Diari de Tarragona (the CNT-FAI mouthpiece) he encouraged and defended revolutionary gains made in the realms of work, culture, politics and education … And was the Tarragona delegate of the New Unified School, Council (CENU), in which capacity he managed to provide a humanistic, cross-class, liberating education system for upwards of 2,000 street kids. The setting up of the CENU was one of the main accomplishments of the revolution and this was due largely to pressures from anarchists like Joan Puig Elias or Josep Alomà himself.

Q. And Josep served in the trenches too. Where was he posted?

A. First he fought for a month in Villarrobledo and later in Baza (Granada), where they made him company commissar and head of propaganda with the Army of the South, attached to the Andalusian Staff.

Q. Where was he come the end of the war?

A. Right where the war finished up: in the docks in Alicante. Weeks before then, his friend Dr Félix Martí Ibañez had suggested to him that, given the way the Stalinists had betrayed the revolution and how the war was a dead duck, he should move to the United States. But Josep refused out of loyalty to his family and comrades. After surviving the Francoist concentration camps for nine months, he was then transferred back to Tarragona.

Q. What happened to him once he was in the hands of the fascist courts?

A. Even though dozens of right-wingers and priests [among the priests whose lives he saved were Fathers Ritort, Esteve, Parera and Batlle] came forward with evidence of how he had saved their lives, the regime’s judges sentenced him to death for “military rebellion”. Only relentless lobbying of the Francoist upper echelons by his wife – she even managed to secure an audience with Army Minister Enrique Varela – got that sentence was commuted to 30 years’ imprisonment. His brother Pau had been sentenced to death and shot in 1940 and another brother, Jaume, had died in jail in 1942, both having been convicted of “military rebellion.” [Josep Alomà himself died on 9 May 1993].

Q. And what was life like for him after he was released?

A. Given that they had killed his two brothers and that his own eldest daughter had died during his time in prison and that the regime had seized everything he owned and that Alomà and his wife, being victimised politically, were unable to ply their trades as teachers and that he was banished from Catalonia, [Alomà was banished from his native Catalonia and was only able to return there in the 1960s] well … It was work, work, work, basically as a clerk of works in the building trade and raising kids. And just surviving a regime that made life impossible for him.

Q. And was he active during Francoism?

A. He was active in a clandestine sense, within the trade union organisation (CNT) as well as inside the FAI. Under constant surveillance, he headed up social ventures, such as the time when he chaired the Social Centre in Entrevías in Madrid.

Q. What part did he play during the Transition in relaunching the CNT in Tarragona?

A. Josep Maria Alomà’s role was crucial in refloating the union. Off his own bat he sought out suitable premises, refurbished them, bought furniture and set up a library made up mostly of the books he himself donated and, for many a year, he covered the rent on the premises. And his efforts at recruitment and spreading the anarchist ideal were never-ending … Talks, book launches, university symposia…

Q. You are his grandson. How do you remember him?

A. I have countless memories to choose from since he lived with us. He taught us to read and write and how to play chess and regaled us with stories from his youth … Many a time he told me about his days in prison. Using saturated newspapers they made paper maché chessmen so they could play chess, that being one of the few outlets the inmates of the Castillo de Pilatos had. Later I found out that the newspapers used were the Nazi-fascist publication Redención.

Q. The title of your book is: A Utopia, A Hope. To what are you referring there?

A. Alomà was the embodiment of those who refuse to fatally resign themselves to this world’s radically unfair and arbitrary ways and who fight cynicism, opportunism and mediocrity with an eye to working a profound change in the certain knowledge that without Hope there can be no movement towards Utopia.

From: cnt, No 371, October 2010 [Material inside square brackets from different sources]. Translated by: Paul Sharkey.