The Third Revolution? Peasant and worker resistance to the Bolshevik government 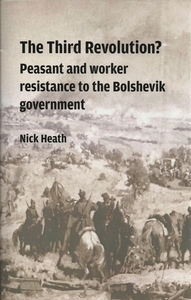 The Makhnovist movement of the Ukraine is the best known of the revolutionary oppositions to the Bolshevik regime. But it was not the only radical challenge the Bolsheviks faced from below. Numerous peasants revolts occurred in the years 1920-22, aiming not to restore the old regime but to defend themselves from the new one. Nick Heath here examines their extent, causes and limitations.

Contents:
Introduction : The Third Revolution? Peasant and worker resistance to the Bolshevik government
The West Siberian uprising (1921-1922)
1920: The Sapozhkov Uprising and the Army of Truth
The Fomin mutiny on the Don, 1920-1922
1921: The Maslakov mutiny and the Makhnovists on the Don
Brova, Mikhail or Brava aka Batko Brova, ?-1921
The Kolesnikov Uprising
Workers Revolts against the Bolshevik regime
Lamanov, Anatoli Nikolaevich 1889-1921

Nick Heath became an anarchist in 1966 by reading books on anarchism in the public library. He helped set up Brighton Anarchist Group (1966-1972) and went to Paris in early 70s for a year and participated in the anarchist movement there. Now a member of the Anarchist Federation, he's the author of large number of biographical articles about anarchists as well as articles on the Hungarian Revolution, the Makhnovists etc.

Cover art: Roberto Ambrosoli's Anarchik.
Most of these articles were originally posted in the Libcom library: http://libcom.org/tags/nick-heath