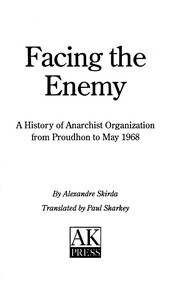 The finest single volume history of European anarchism is finally available in English in Paul Sharkey's elegant translation. Drawing on decades of research, Alexandre Skirda traces anarchism as a major political movement and ideology across the 19th and 20th centuries. Critical and engaged, he offers biting and incisive portraits of the major thinkers and, more crucially, the organizations they inspired, influenced, came out of, and were spurned by. Opinionated and witty, he is equally at home skewering the actions of the early anarchist Victor Serge as he is the Paris chief of police who organized undercover "anarchist bombers" in an attempt to infiltrate and discredit the movement. Skirda argues that the core problem for anarchists has been to create a revolutionary movement and envision a future society in which the autonomy of the individual is not compromised by the need to take collective action. How anarchists have grappled with that question in theory and practice make up the core of the book.