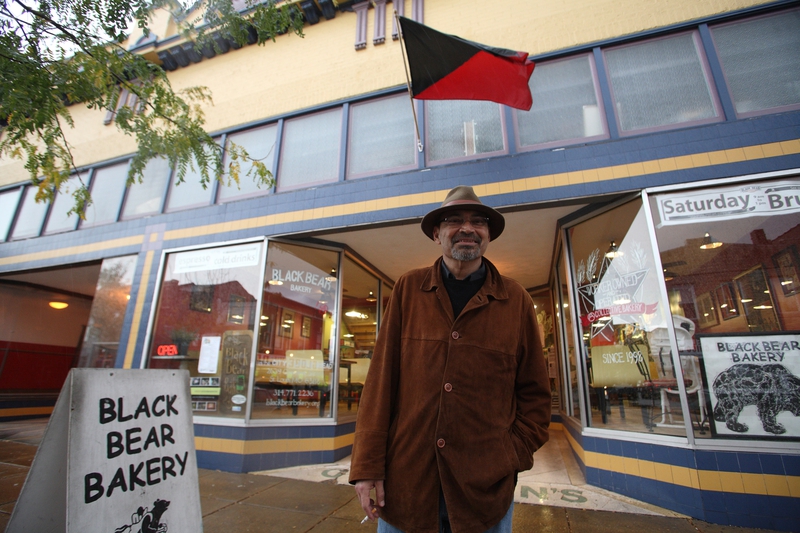 This week we discovered sad news. Jacinto Barrera Bassols, anarchist, historian, and friend, had died in July of Covid-19 at age 65. We spent only a handful of days with this funny, inquisitive, warm-hearted man. He defied all our stereotypes of an academic historian, and left a deep impression on us.

On the hunt for lingering traces of Ricardo Flores Magon and his fellow Mexican anarchist expatriates, Jacinto and his photographer companion, Heriberto Rodriguez, retraced Magon’s zig-zag route across the US. Here in St. Louis, they found the black-and-red flag flying on Cherokee Street and walked into the storefront of Black Bear Bakery. It was 2008. The timing couldn’t have been better. The bakery collective was a lively bunch and the space and its library had become the gathering spot for the city’s small but passionate collection of anarchists. Much to the delight of Jacinto, on the wall above the case of pastries, hung a large painting of Magon, arms outstretched – fire and destruction on one side, cooperation and utopia on the other.

After this chance encounter, we talked late into the night, sharing the forgotten histories of this city… Jacinto, a historian on the century-old trail of this man on the run from the Mexican authorities and plotting a Mexican insurrection from this bustling metropolis in middle America, and some anarchists trying to foment a present-day insurrection in the impoverished remains of that same metropolis. He asked about the possibilities of urban riots if Obama lost the election, and we asked where Magon had laid his head to rest every night while here. The next day we showed him around and introduced him to friends. He was a human being – unpretentious, loving, and gracious unlike any historian or academic we had ever encountered. He was a gentle and witty 50 year-old effortlessly lounging with all us restless 20-somethings. And with the 4-year-old child among us, he had the sparkle in his eye of an uncle and the glow on his face of someone who treasures the beautiful unbroken freedom that children exude.

He visited again in 2013, this time with his wonderful assistant Veronica. Age had taken a toll on his body, but his humor and engagement was as pleasant and sharp as before. He had just come from Leavenworth, visiting the cell where Magon had taken his last breath. He shared stories of the early 20th century May Day celebrations and anarchist study groups that remarkably took place in the hell on earth which was that prison. We brought him and Veronica to a party at an anarchist squat on the city’s near northside, and later at a nearby restaurant, he treated us to jambalaya (something he couldn’t find in Mexico). He mused on the cartel/state violence in Mexico, removing its cloak by describing it quite simply as a civil war – with only Mexico City immune to its cruelty.

We drove around the Gate District, him pointing out the abandoned lot where the printing press for “Regeneration” was once housed and the public library with the Mexican newspapers that Magon would walk to everyday to stay abreast on the conflicts unfolding south of the border. He showed us the neighborhood (long destroyed by a highway) south of downtown where the Spanish anarchist immigrants lived – among whom Magon and the rest of the Mexican anarchists found comradarie. He explained the close relationship between the Mexican anarchists and the Catalan anarchist wobbly Francisco Basora, who also found a home in this city.

Between his visits, like excitable children, we shared nuggets of history we uncovered about Magon’s time here – old maps, court documents, addresses of old anarchist residences, obscure manuscripts by private detectives paid by the Mexican state to track him down, drawings of old buildings… For us it made our city alive with ghosts, for him, we’re not sure, but it was likely the satisfying clicking together of the puzzle pieces of his life’s work. We’re not sure what his relationship was to non-academics in San Antonio, Los Angeles, Toronto and the other places Magon found himself, but we think he found great joy and love that – for our own sake, not an institutional one – us modern-day St. Louis anarchists felt moved that these dream-filled anarchists had blessed our city a hundred years earlier.

But it wasn’t all about Magon. We talked raising children, our health problems, Cajun food, Mexican ska-punk, the beauty of the ocean, the rebellion in Oaxaca, and the fantastical, contested story of if Trotsky’s ashes were ever actually stolen by anarchists, baked into cookies, and mailed to people around the world.

“Mi casa es tu casa” – and there wasn’t a doubt he meant it. Over the 13 years, two sets of friends made the trip to Mexico, one to visit him in Mexico City, the other to visit him at his peaceful spot in Puerto Escondido. And when one of us had a near fatal, catastrophic injury during the riots in Ferguson, without hesitation, he again offered his place in Oaxaca for us to recover from the trauma of it all.

During our last correspondence one of us regretted not scrawling “Magon lives!” on the walls of Ferguson during the riots. We both understood the threads of histories, often disparate and short, that weave, patchwork, up to the present. The blood pulsing through us is mostly our own, yes, but we would be remiss not to appreciate, marvel at, and broadcast the tiny bits that come from our lived and learned histories – the bits that invigorate our hearts and pump that blood through us making us believe that utopias, that “sueños de libertad,” are realizable. The history of the lovely Jacinto, like that of Magon, now forever moves through us.

For more on Jacinto’s life and work:
His life’s work on Magon – photos, a map of his route, all issues of Regeneration, a compilation of the complete works of Ricardo Flores Magon, and so much more:
http://archivomagon.net/