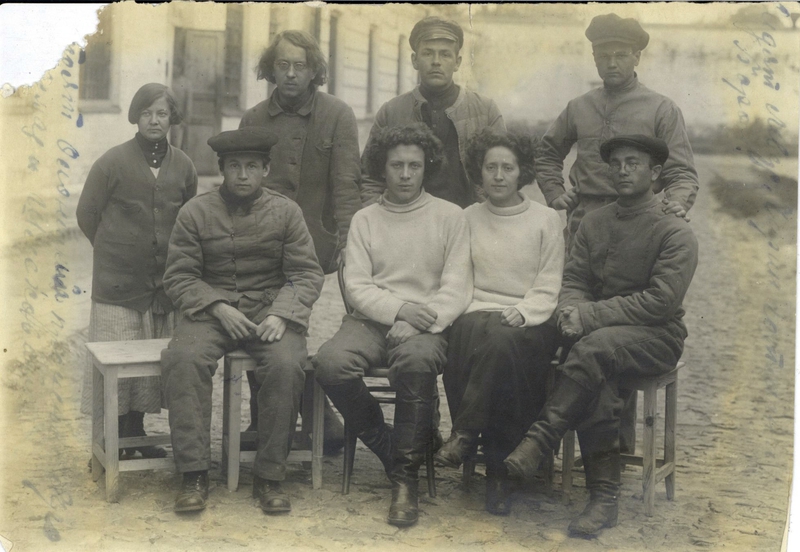 The photo appears to have been taken in a prison yard, probably a Kharkov prison in 1922.
With help from Ukrainian researchers, everyone in the photo can now be identified (they were all Nabat activists)
Front row left to right: A. I. Levada, Ivan Charin, Liya Gotman, Aron Baron
Back row left to right: Rebeka Yaroshevskaya, Alexey Olonetsky, [not Aleksandr - see update below -but] V.I. Protsenko, Anton Shlakovoy

Information about the photo: it was found in the archives of the Security Service of Ukraine in Kiev, lineal descendant of the GPU/NKVD/KGB. It was with a bunch of photos in a envelope in the file for a 1952 case entitled “Former Participants of Anti-Soviet Political Parties.” But everyone in the photo was dead by 1937-1938. [Originally posted on facebook, thanks to Malcolm for passing it on and the historian who dug it out.]

Update: Anatoly Dubovik has just made a correction to the identifications in the photo: it is V. I. Protsenko in the photo, not Aleksandr Protsenko (who was born in 1909). The rather obscure figures V. I. Protsenko and A. I. Levada were delegates to an anarchist congress in November, 1920, representing peasant groups.