A Grand Cause : The Hunger Strike and the Deportation of Anarchists From Soviet Russia 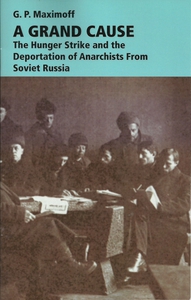 Dubovik, Anatoly and G. P. Maximoff. A Grand Cause : The Hunger Strike and the Deportation of Anarchists From Soviet Russia. Kate Sharpley Library: 2008. Translated by - Szarapow.

Grigorii Petrovich Maksimov (better known to western readers as G. P. Maximoff) was Secretary of Russia's Anarcho-Syndicalist Confederation and editor of Golos Truda (The Voice of Labour). He experienced at first hand the Bolshevik repression which crushed other revolutionaries and subordinated popular revolt to party dictatorship. This text comes from his indictment of the Bolshevik regime The Guillotine at Work: Twenty Years of Terror in Russia (1940). It has been footnoted by the Kate Sharpley Library to throw the light on the stories of other Russian anarchists as part of our Anarchists in the Gulag Project. Maksimov's years of exile were dedicated to anarchist activism and propaganda, criticising the Leninist counter-revolution and attempts to extend solidarity to anarchist prisoners in Russia. He died in 1950 and was buried in Chicago's Waldheim Cemetery. The pamphlet comes with a biographical essay by Anatoly Dubovik, translated by Szarapow.