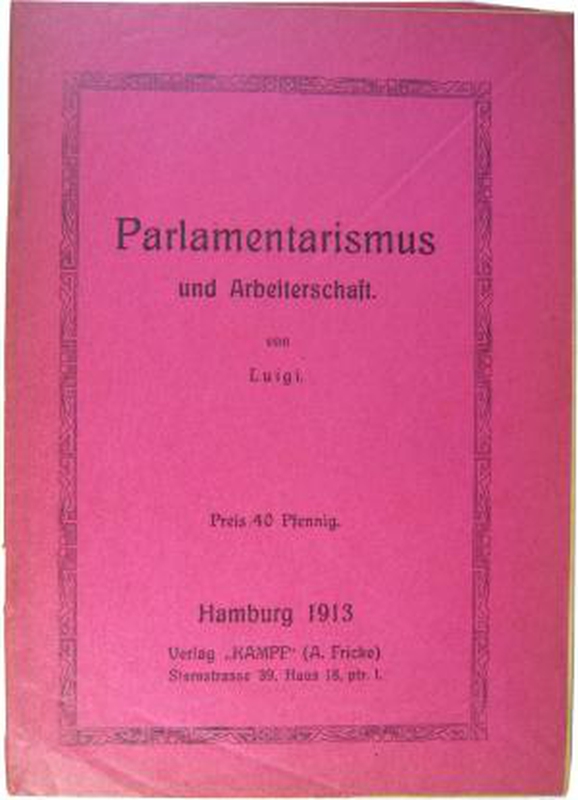 “We Anarchists have always prepared the working classes for the fact that whenever the danger of war will come next Social Democracy will show no friendship for peace: nay, that when war will break out it will go so far as to support it, and will, therefore, find itself on the side of the oppressors against the workers of other countries”. Paul Schreyer, Social Democracy and War.

Paul Schreyer was born on 21st September 1887 in Zahna, in Saxony-Anhalt, Germany. A cooper by trade, he made contact with the Anarchistischen Föderation Deutschlands (AFD). At the end of 1906 he contacted „Anarchistischen Lese- und Debattierklub Norden“ (Anarchist Reading and Debating Club-North) in Berlin to obtain a statute to set up a similar group in Hamburg-Altona. This was set up in mid-June 1907 and applied to join the AFD in August 1908. From this group there grew Anarchistische Föderation Hamburg-Altona und Umgebung (Anarchist Federation Hamburg-Altona and the surrounding area) in December 1909.

Schreyer took a leading role in the Hamburg anarchist movement alongside Karl Roche and Ernst Schneider.

On April 10, 1910, the Hamburg Federation invited comrades from northwestern Germany to a conference in Hamburg, attended by about 29 people. The conference was concerned with increasing agitation and strengthening organisation. Hugo Schlegel, the chairman of the Hamburg Federation (and a bookbinder by trade), justified the proposal for the creation of a unified “Northwestern Federal State Federation” with the hope of overcoming introspection and becoming a mass organization with fixed contributions to finance propaganda and a newspaper.

The constitution adopted at the conference based the federation on local districts including “city complexes” which in actual fact were only Hamburg and Bremen. The district federations or agitation districts formed the State federation, with a six person executive, the Business Commission (GK) based in Hamburg. Three members of the GK were to be from Hamburg, the rest from other districts. The GK itself was to finance itself, which meant that corresponding comrades would have to pay for their own postage, and expenses for leaflets and meetings would be allocated to the individual groups.

The state federation failed to establish itself. The Bremen anarchists joined the FVdG (Freie Vereinigung deutscher Gewerkschaften, Free Association of German Trade Unions – the precursor of the anarcho-syndicalist union FAUD) so that the future conference planned to take place in Bremen in 1911 failed to take place. There were also problems in Hamburg where some anarchists were opposed to the establishment of a state federation. This weakened activity in Hamburg for some time. At the beginning of 1911 Schreyer took an active part in developing the federation. During the first six months of that year activity in terms of propaganda and meetings considerably increased. However, the state federation failed to materialise.

In 1912 the Hamburg comrades concentrated on bringing out the monthly paper Kampf (Struggle, subtitled Organ for Anarchism and Syndicalism). The first issue, unnumbered, appeared on May 1st. The paper was consistently printed on blood red paper. Chief editor was the carpenter Albert Fricke, until Schreyer took over from issue 11, although he very probably put a lot of work into Kampf from the beginning.[1]

There may have been a falling out between Schreyer and other Hamburg anarchists as from issue 21 and 22/23 H. Noll took over the editorship, with W. Krauss editing issue 24. However Schreyer, under the pseudonym Luigi continued to write for all of these three issues. He retired from the paper in July 1914, editorial duties being taken on by Albin Peukert, Noll, Fricke, Krause and W. Krauss who announced a new issue for August 10th  which failed to appear because of the outbreak of war.

Schreyer’s departure from Kampf was due to the state clampdown with the coming of the First World War. On July 31st he was one of the speakers at an anti-war meeting held by the Hamburg anarchists and attended by 2,000 people.

On August 2nd he escaped to Basle in Switzerland as on the 6th of the month he was due to be drafted into the Army. In December 1914 his pamphlet Die Sozialdemokratie und der Krieg (Social democracy and War) attacking the complicity of the Social Democrats with the war, was published in Copenhagen by Solidaritet and distributed in Germany. The German government began to put pressure on the Swiss government. which finally delivered him unlawfully to the Germans. He was thrown into jail for desertion, being sentenced in 1916 to 41 years for as a reservist, illegally removing himself! The appalling prison conditions ruined his health; he died at the end of the First World War, some time after 26th April 1918 in the Spandau prison fortress

1, Kampf had an important influence on the harbour workers and seafarers of Hamburg, as with the dockers’ strike of 1913 and the strike on the ocean liner Vaterland the following year. Average circulation was 2,000 copies, occasionally up to 4,000, It had 700 subscribers in autumn 1912, and about 1,000 in the spring of 1914. Unsold copies were distributed free of charge especially among harbour workers.