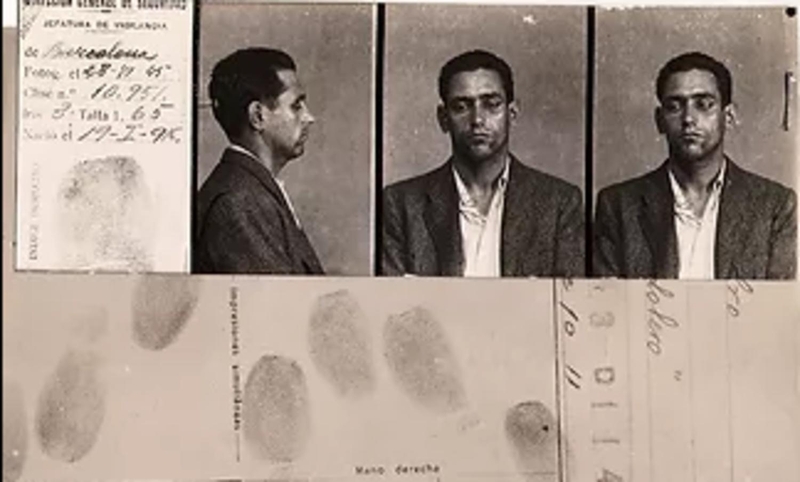 A life story like a film script. From the mining basin in León to command of guerrilla brigades in France and thence to his native land again as a guerrilla

Hello readers. Whilst preparing my previous entry I was on the look-out for information regarding some of the anarchists who took part in the French Resistance. One of these went on to assume command, initially, of the 2nd Spanish Guerrilla Agrupación operating in the Toulouse area and then of the 35th FFI Brigade, known also as the ‘Marcel Langer’ Brigade in honour of its previous commander who had been executed by the Germans. The man in question was one Joaquín Ramos aka Souquees. He gets a mention in lots of books and articles, but we did not even have a photograph of him, nor were we told anything further about him. So far, so normal, as it is very often the case that when one goes in search of someone, all one finds is the same information reiterated on every side. Sort of a cut-and-paste job.

But lo and behold all of a sudden I hit the jackpot.

I came across the blog https://alvatorre-wixsite.com/periodhismo/resistencia, which strikes me as very interesting. But I must have made a mistake as, among the many snapshots I saw, there was one guy from León by the name of Manuel Ramos Rueda and in fact the entry concerned talks about him rather than Joaquín Ramos. As I say, I must have gone wrong somewhere. But on reading the entry in question, I was surprised to discover that Manuel Ramos Rueda used the nom de guerre Joaquín Ramos in the resistance. So now we have tracked down the anarchist who led the guerrilla brigades.

I touched upon some of his feats in my entries regarding the resistance in Leon. But apparently he is more than deserving of an entry focused on himself. Most of the details have been lifted from Daniel Álvarez de la Torre’s blog, he being the person behind the blog cited earlier. It should be said that Ramos was a CNT member but, while in exile in France, he joined the PCE, so anybody out there in who gets in a lather about orthodoxy should stop reading here, for the sake of his health.

So, here we go with the breakneck story of this fellow.

Among the aliases used by Manuel Ramos Rueda were Pelotas, Ramos, Patatas and Coyote. He was born in the León mining town of Santa Lucia de Gordón. He began working down the pit in the Sabero-Cistierna mining area very young and shortly after that joined the CNT, whilst also joining the Sabero branch of the Libertarian Youth.

A hot-headed creature of impulse, he was soon involved in social disputes. On Palm Sunday 1934 he shot a hired gun of the bosses, known as el Chulo, three times, killing him. He then fled to Madrid in an effort to pass undetected in that city, but was finally arrested on 9 February 1935. He served some time in the Riaño prison before pulling off a successful escape in 1936.

After the outbreak of civil war he enlisted in the 206th Battalion, made up mostly of anarchists from León; it was under the command of Laurentino Tejerina. By the time the northern front collapsed in the autumn of 1937, Ramos was serving as a lieutenant with No 3 Company. We know not how but he managed to evade capture and crossed into France in early 1939.

Now over to Ramos himself for an account of his early days in France:

“Sentenced to be deported by the Haute Garonne prefecture for having escaped from the Argelès-sur-mer refugee camp in the Pyrénées Orientales department at the end of our civil war, I spent eight months in prison in Perpignan and in Béziers (north of Perpignan) before being committed to the Agde camp in Hérault (near Montpelier).”

We know that, come the outbreak of the Second World War, Ramos was in Toulouse, the capital of the Spanish republican exiles. The Nazis invaded France in June 1940 and, shortly after that, on 29 August, Ramos was arrested by the gendarmes from Mont Louis in the French Cerdagne. In 1941 he was shipped off to an internment camp near La Rochelle and its submarine bases, but he was there for only a short while as he escaped from there as well. Hunted by the Germans, he joined the nascent Resistance forces. It was sometime in 1943-44 that he joined the Communist Party of Spain. Over to Ramos again for an account of his time in the Resistance:

“In June 1944 I was arrested in Salie du Salat (south of Toulouse) in the Haute Garonne by the Germans whilst marshalling networks with an eye to the fight to liberate the country in hand-to-hand fighting spearheaded by the Resistance … Wounded in Resistance operations against air force installations in Toulouse, I was subjected to interrogation by the DST police over a couple of days but made good my escape under gunfire from them … In hope of our victory, I had no hesitation in risking my neck repeatedly in the most dangerous missions; I was determined to have the honour of taking part in the networks which, heart and soul of the country when the crunch came, were determined to win by throwing all their efforts into the glorious days of combat in August 1944.”

As we know, his Resistance activities led to his promotion through the Spanish and French ranks and he assumed command of entire brigades. In fact, he was in charge of the 2nd Brigade from as early as January 1943. From his own writings we know of some of the operations in which he participated:

6-6-43: He organized the maquis in Montaigut-sur-Save (northwest of Toulouse).

5-10-43: He organized the maquis in San Bertran de Cominges (between Pau and Toulouse).

5-2-44: A grenade and machine-gun attack on a special convoy of German troops arriving in Muret (20 kilometers south of Toulouse), leaving 30 dead and 80 wounded.

3-4-44: Arrested by a Gestapo agent in a café in Salies de Salat (south of Toulouse) whilst on a mission, meaning as part of an organized Spanish group, I nevertheless managed to escape after killing that official.

20-8-44: Attack on a German truck carrying two artillery pieces in Faubourg Bormefoi, killing all of the occupants and seizing the gear.”

With France liberated, Ramos did not take part in the Arán Valley invasion. But in June 1945, setting off from Perpignan, he crossed the border into Gerona province, on a mission for the PCE. Arrested by a patrol of soldiers, he was jailed in the San Elías prison in Barcelona, escaping from there on 21 September.

In Barcelona and thanks to old CNT connections he secured the papers he needed to get as far as León. There he made contact with the family of the CNT’s Tejerina and, thanks to them, established contact with the people up in the hills. Most of the bands in northern León had served with the 206th Battalion. Since this entry might go on forever due to Ramos’s tremendous activities, I shall now offer a list of the operations in which he took part:

January-July 1946: “In Puentealmuhey we carried out a raid in January 1946, but due to the racket that was raised we were unable to kill a Falangist businessman who had been responsible for killing left-wingers. I killed his son and we also wounded a Civil Guard.

In the Carrizo area we raided the home of a mayor involved in the black market. We seized 8,000 pesetas, splitting it between the two of us and I used the cash to buy our first copier.

In Vega del Bernesga [Vega de Infanzones] we raised the homes of two Falangists. One of them was a butcher and the other ran a cantina. Those of us who took part were Enrique, El Gitano [Llaneza], César [who was killed in a shoot-out in San Pedro Bercianos] and myself. Placido was also in on it as our informant. We collected 9,600 pesetas.

November 1946-February 1947: “A further raid in Azadinos alongside Aureliano [Suárez Robles] and one other, making off with 4,000 pesetas.”

August 1947: “In August 1947 I raided a gunpowder store in Sabero and seized 15 kilos of dynamite, fuses and detonators. I left the watchman there tied and bound. And had to cover 110 kilometers on foot just to do it.”

April 1948: Trip to Madrid. Possibly his first attempt to escape to France.

25 May 1948: “On 25 May 1948 I went to the home of a Sabero businessman, but upon entering found that his father was a family acquaintance of ours. I had a word with him and realized that we had been misinformed. He handed us a thousand pesetas and offered to supply us with food anytime we liked.”

September 1948: Travels to Madrid and Barcelona looking into ways to get out to France.

4 October 1948: Enters France via Pamplona and via Urepel near Roncesvalles.

Whilst not specifying the dates, Ramos also mentions certain other actions such as that related to Franco’s visit to Asturias “We blew up a 500-metre stretch of roadway” and, speaking of blowing things up, also blew up “the Falange premises due to be officially opened by Labour minister José Antonio Girón de Velasco, utterly destroying them.” And then there was the attempt on the life of the special judge in León who was wounded in the shoulder.

Now, to close this list with a wink, suffice to say that in 1948 he successfully dodged police checkpoints before reaching the safety of France once more.