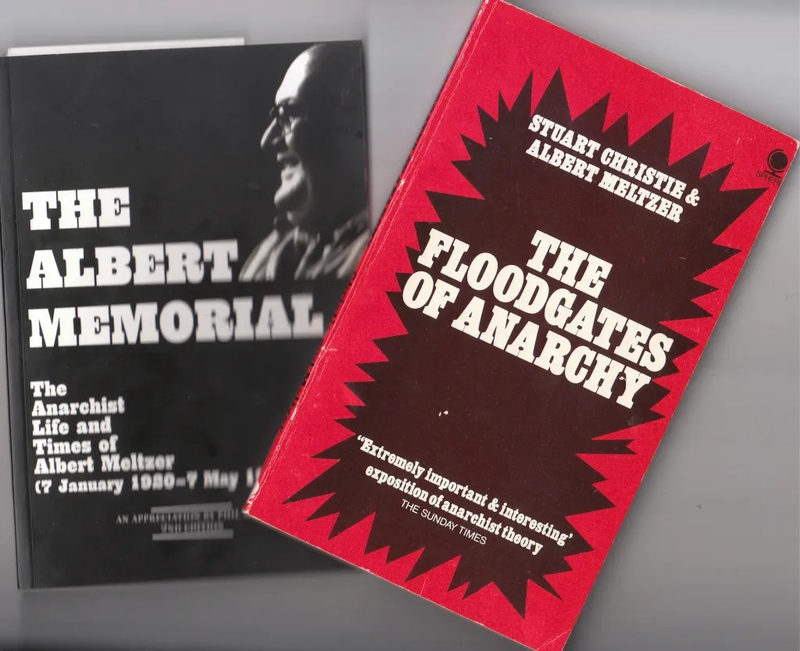 Today, the 7th of May 2021, is the anniversary of Albert Meltzer’s death. Philip Ruff has written a tribute ‘Remembering Albert Meltzer 25 years on’ which has been posted online by Freedom Press: ‘“Don’t forget me – or I’ll be back!” Those were Albert Meltzer’s final words to Stuart Christie, his closest friend and collaborator, in a letter which he left with his last will and testament. In a perverse way I wish I could forget Albert, so that he would come back. But not a day goes by without me thinking about him, so I know he will remain where he is, in the anarchist back-room saloon bar of Valhalla, telling outrageous stories and guffawing loudly at his own jokes, surrounded by his awkward squad of fallen angels, Billy Campbell, Stuart and Brenda Christie and Miguel Garcia.’

You can read the rest of the tribute at https://freedomnews.org.uk/2021/05/07/remembering-albert-meltzer-25-years-on/

We have posted a couple of items which show different aspects of Albert’s life. The first is humorous. ‘Design for Revolution’ is a press report of a leaflet which Coptic Press published in the lead-up to the London anti-Vietnam War demonstration, on 27 October 1968. The October Revolution, 27th & 28th October 1968. Positions to seize and strategic tactics to deploy. (By order of the Revolutionary Junta) is a spoof on the press and police hype:

‘All revolutionists engaged in acts of sabotage to sing not the Internationale but the Eton Boating Song, thus confusing the police as to whether it is mob violence or healthy youthful high spirits.’ See https://www.katesharpleylibrary.net/05qh33

The second, ‘The stuff of politics’ was published anonymously in Black Flag in 1978. It attacks the permanent state of crisis where ‘the mugs need to work harder and go without, and yet it is their slackness or greed – as opposed to that of the hard-working industrious and self-sacrificing leadership – that brings about all the problems.’ The challenge is laid down:

‘But changes in personal values and alterations in life style will no more affect power and profit than changes in fashion. Everything in capitalist society will stand or fall by the criterion of private profit; every advance in personal freedom will always be at the mercy of whoever happen to control the State machinery in any society; the impersonal machine controlling the State will ultimately decide whether we live or die. Unless we pit against it the one thing that still gives us strength – the muscle of our labour.’ See https://www.katesharpleylibrary.net/h44kp0

Whether laughing or fighting, we won’t forget you.

[Update: Thanks to the Labadie Collection we’ve put up Albert’s Aims and principles of anarchism : an essay at defining what the Anarchist Movement is and how wide a field it covers. London: Coptic Press, 1968: https://www.katesharpleylibrary.net/ns1th7]