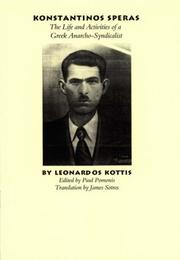 Konstantinos Speras was one of the pioneers of the working class trade-union movement in Greece. He spent the biggest part of his life in prison and in exile. He fought with all his might for the emancipation of the working class, for an autonomous trade-union movement, for a society without slaves and bosses. He represented revolutionary syndicalism and as a consequence he incurred the wrath of the State and the Communist Party. He was slandered, his work and actions were distorted and eventually he was murdered, along with dozens of other working class militants, in the name of the one and only ‘orthodox’ way to socialism.