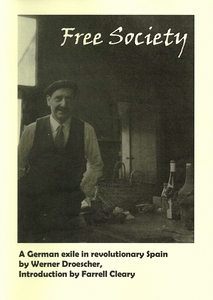 Werner Droescher was an exile from Nazi Germany who in 1936 found himself pitched into the dramatic social reconstruction of the Spanish Revolution. Droescher, with his companion Greville Teixidor, joined the revolutionary militias on the Aragon front. Later they carried out solidarity work for the Spanish anarchists from London, before returning to Spain to work with refugee children. This extract from his autobiography, Odyssey of a teacher, gives a first hand account of the anarchist attempt to build a free society. The introduction by Farrell Cleary shows the impact of this experience, and Droescher's influence on the Anarchist movement in New Zealand where he first settled in 1940.