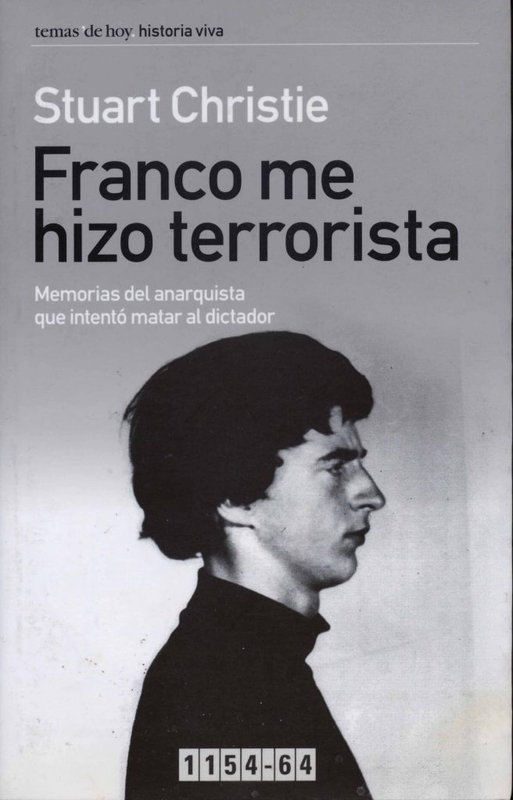 It is quite an experience discovering Stuart Christie’s “Spanish” background. This Scottish lad, barely 18 years old, knowing nothing of Spain and without speaking a word of Spanish, hoisted a rucksack full of explosives on to his back, strapped packets of plastic explosive to his body using bandages and secreted the detonators, wrapped in cotton-wool, in the lining of his jacket and headed off to Spain to put paid to the infamy of a populace terrorised by a bloodthirsty dictator and his sinister cabal of generals, bishops, latifundists and bankers.

Now, 40 years on, he is back again, bringing us his book leaving us a bittersweet taste of “auld lang syne” (Stuart will get my reference here) from the good old days, back when we were all a lot younger. The rest is just the filthiness that Stuart had to endure: beatings, torture, interrogation and imprisonment. Typical of those times and of the ignominy, nonsensicality and mediocrity into which a people that had fought bravely and right to the finish for freedom had been thrust.

Maybe a reading of Chesterton’s story The Man Who Was Thursday holds the key to the reason why Stuart was arrested the moment he set foot in the Puerta del Sol. The author himself suggests that spies fall into three categories: journalists, security service personnel planted inside an organisation (especially an organisation with such an all-embracing banner as the red-and-black flag) and those bribed by the police into acting as informers from within (see pp. 36 et seq).

The book offers an endless parade of personalities from the time: the old fighters in exile: Salvador Gurruchari, Laureano Cerrada, Cipriano Mera … The men and women who, to borrow Hans Magnus Enzensberger’s words, “are neither weary, nor neurotic nor drug-dependent. They do not complain. They do not curse fate. Their defeats have not made cynics of them. They know that they made mistakes, but they do not try to wipe out the memory of them. These elderly men, revolutionaries still, are stronger than all who came after them”

And the boys from the Puerta del Sol – Eduardo Blanco and Saturnino Yagüe – pop up too … Further comment unnecessary. Forenames and surnames suffice. The military judges, the sentencing, Carabanchel. In Carabanchel we find the ‘ordinary’ prisoners of the Seventh Gallery, astutely depicted by someone who was just starting to learn so many new things, and the political prisoners in the Sixth Gallery, with a sprinkling of not particularly fond references to the inmates belonging to the PCE (Communist Party of Spain), real personalities such as the counterfeiter Miguel de Castro who, as Stuart remembers him, was “a prison mentor, a wise guide versed in the art of the possible”, the comrades from the ‘First of May’ Group, and Luis Andrés Edo, my own beloved comrade and friend.

Half-history and half-reportage, the book is a supremely interesting read. We find frequent flashes of Stuart’s British sense of humour inviting us to smile: “In real life, there was never a cavalry troop around when you needed one”, a reference to the cells of the Brigada Político-Social; or the fear he feels when they moved him to what was then the Yeserías Prison Hospital, when he suspects they are going to “trepan him or subject him to some other sort of sub-Pyrenean psycho-neuro-surgery.” Or the delicate touch displayed by the kidnappers of Monsignor Ussía in furnishing him with a Bible, only to discover that, “they were not particularly well-versed in matters of theology”, it turned out to be a Protestant Bible; or, indeed in his inspired brief description of Don Pablo, a fascist brute of a prison officer “he was the A to Z of anal retention.” The passage which I personally most enjoyed reading, on account of my repeated fond readings of the adventures of both characters, was the one where he says that “Don Quijote had taken on the personality of William Brown.”

In short, in my view, there is another aspect to this book which is not to be sniffed at: its verfremdungeffekt, that distancing, elegant gift for recounting events, no matter how dramatic, as if he were not involved, as if they were happening to someone else. As Carlos Fonseca has stated in his Foreword, which is spot-on and as clear as water, “Go ahead and read”.