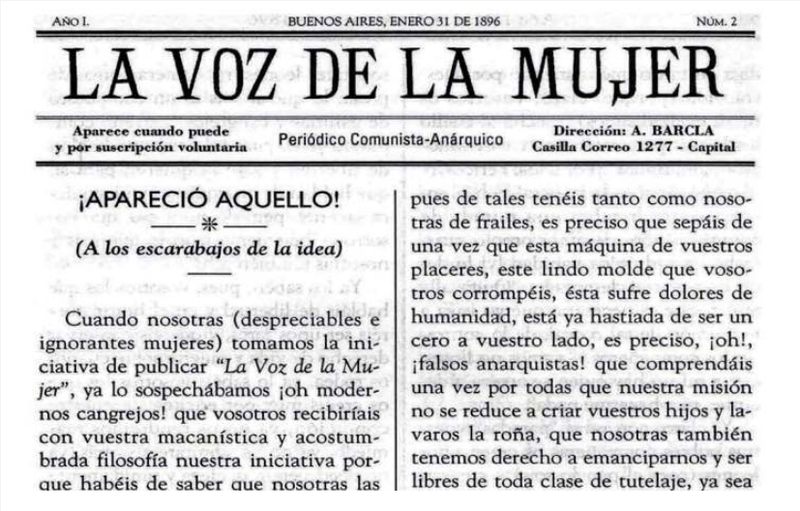 On 8 January 1896, a group of women, with Virginia Bolten as the main driving force, produced the very first edition in Buenos Aires, Argentina, of an anarcho-communist women’s publication, La Voz de la mujer  (Woman’s Voice). The paper which would later be published out of Rosario, was to produce a total of nine issues, up until 1 January 1897 when it was forced to shut down for financial reasons.

La Voz de la mujer was a four-page paper with a print-run of between 1,000 and 2,000 copies. Distribution proved a thorny issue because of the paper’s unmistakable stance in favour of direct action.

La Voz de la mujer called upon women to rebel again male oppression, without neglecting the labour struggle. The institution of marriage was one of the main targets of its columnists who championed the notion of free love. Among the contributors to the paper who were also in touch with celebrities like Louise Michel and Emma Goldman, were Pepita Guerra, Teresa Marchiso, Josefa Martínez, Soledad Gustavo, Ana López and Irma Ciminaghi.

The appearance of the paper triggered certain tensions inside the Argentinean libertarian movement as a number of its activists reckoned that certain articles were tantamount to attacks on the male of the species.  This was plain from the clarification that the paper’s editors published in issue No 2 of 31 January 1896, a translation of which follows:

To the small of mind

When we (contemptible, ignorant) women took it upon ourselves to publish La Voz de la mujer, we had a sneaking suspicion even then, you modern crabs! that you would greet our initiative with your usual belated philosophy, as you ought to know that we silly women can also show initiative and that that is a product of thought: because we think too; are you aware of that?

The first issue of La Voz de la mujer appeared and, naturally, it was a Trojan horse: “We don’t deserve this, come on! NO sirree!” and “Women’s emancipation?” “Why?” “What women’s emancipation?” “Ours must come first and then, once we men are emancipated and free, then we shall see”. Those were the sort of humanitarian, liberating thoughts that greeted our initiative. They should keep those to themselves, we reckon.

We were already convinced that, unless we ourselves were to take the initiative in emancipating ourselves, we would turn into stuffed dummies, or something of the sort, before the King of the World (man) might get around to it. But you crabby gents, no anarchists, though you mistakenly style yourselves such, being about as anarchist as we are nuns, you need to know once and for all that this, your pleasure-machine, this ninny, corrupted by you, which suffers the pains of humankind, has had her fill of being a cipher alongside you. Oh, you phoney anarchists, it is high time that you learned once and for all that our mission is not restricted to bringing up your offspring and keeping a clean home, but that we also have our right to self-emancipation and freedom from all forms of tutelage, be it social, economic or conjugal.

As far as you are concerned, what is a woman, be she ugly or beautiful, young or old? A servant, a mop!

When, in the terrifying, desperate struggle for survival, your head falls on to your lacerated breasts and if you cannot shake off your bad moods you take it out on us females of the species (and as far as you are concerned, that is all we are) who stand around weeping bitter tears. Which should set you to thinking that gender differences are no obstacle to our ability to feel and think.

We knew already, you unfortunate fellows, that in your eyes a woman is nothing but a fine chattel, something along the lines of a parrot to flatter you and darn for you and work for you and, more than that, to obey and live in fear of you.

You husbands out there, is that not so? Is it not the truth that it is good to have a wife to talk to about freedom and anarchy and equality and social revolution, blood and death, someone who, believing you to be a hero, and fearful for your life (because, naturally, you play at being hot-heads) will throw her arms around your neck to hold you back, murmuring and well nigh sobbing: “My God, Perico!”

Ah, there she is! You run a compassionate eye over your female, with a sense of gratified self-esteem and inflated vanity and with theatrical aplomb you say: “Leave me be, woman; I must be off to this or that meeting, otherwise the comrades … come now, stop your weeping, nobody tells me what to do.” And of course, with such “histrionics”, your poor partners take you for lions and think that the social future, in this vale of … plaster anarchists, lies in your hands.

Of course, you swell with your own importance then – I’ll say – and as your wretched partners consider you formidable revolutionaries, naturally they look up to you intellectually and physically. Which is why, when you have something to point out to your partners, you have merely to fix them with that mighty, irresistible look for them to timidly lower their heads and say: “You’re such a revolutionary!” Which is why, you anarchist crabs, you do not want to know about the emancipation of women because you enjoy being feared and obeyed, you like being admired and lauded. But, you see, in spite of you, we shall bring La Voz de la mujer into your homes and we shall tell your partners that you are not such lions after all, let alone guard dogs; what you are is a blend of chickens and crabs (an odd blend, right? But that is what you are) with your talk of freedom, when you only want it for yourselves and with your talk of anarchism when you do not even know … but we shall leave it there, as you know only too well what you are and so do we. Right? And now you know, you who speak about freedom and yet, at home, would play the tsar and cling to your right of life and death over all around you, you know, you who believe that our condition is beneath you, that we are not going to be afraid of you any more and we are not going to look up to you anymore and not going to be blindly obedient to and compliant with your orders, and we will soon be holding you in contempt, and if you force our hand, will take a firm stand and confront you with a few home truths.

So beware, you play-actors and watch out, you crabs.

If you would be free, all the more reason that we should be too; being doubly enslaved, by society and by man, so let us have no more “Anarchy and freedom” with the washing-up being left to the women-folk. So long!

Virginia Bolten and her paper La Voz de la mujer are the subjects of a full-length film, Ni Dios, ni patrón ni marido, by the Spanish director Laura Maña, released in Argentina in 2010 and starring the Argentinean actress Eugenia Tobal. The screenplay is by Esther Goris and Graciela Maglie, based on research by two Rosario historians, Nora Usensky and Mariana Fontana.