The Early Days of Greek Anarchism : 'The Democratic Club of Patras' & 'Social Radicalism in Greece' 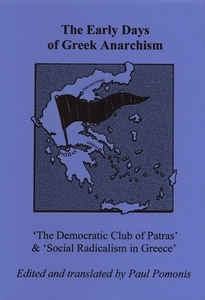 During the days of the First International, Anarchism took root in Greece: the first Greek Anarchist publication came out in 1861. The Democratic Club of Patras (founded in 1876) was organised to spread Anarchist ideas. Their newspaper Hellenic Democracy brought down a wave a government repression, but the seed had been planted...
Contents