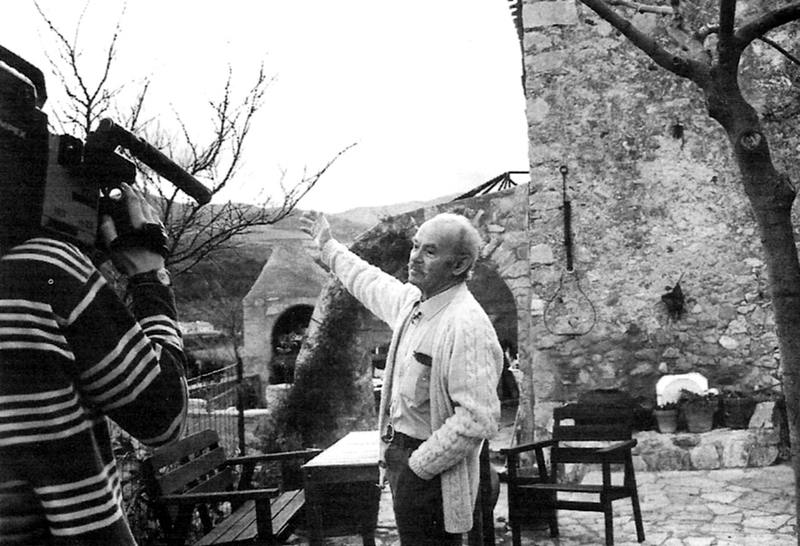 Enric (Henri) Melich Gutiérrez passed away during the night of 7 July 2021. Born in Esplugues de Llobregat (Lower Llobregat) on 5 November 1925, anarchist, cross-border smuggler, anti-Francoist resister and distributor of libertarian publications Enric Melich Gutiérrez was the son of the anarchist and anarcho-syndicalist activist Enric Melich Rodes and he spent his childhood in the La Torrassa quarter in Hospitalet de Llobregat (Barcelona) and the civil war years in Pi de Llobregat, the new name for Sant Joan Despi (Lower Llobregat).

During the Retirada (Retreat) in February 1939 he crossed the eastern Pyrenees into exile and with his family was sent to a home in Pena D’Agenés (Haute Garonne, Aquitaine, Occitania). Later he worked as a woodcutter in the forests of the upper Aude valley.

In 1943, he, the socialist Pedro Pérez and Miguel González worked with an escape line guiding resisters, Jews and wanted persons out to Andorra.

In 1944 and up until the Germans were defeated, he fought in the ranks of the “Jean Robert Group”, attached to the FTPF (French Sharpshooters and Partisans) in the Aude valley, confronting both the Nazi occupiers and the Vichy government; he used the nom de guerre Corporal Sanz.

Even as the war raged on, he joined the disastrous guerrilla campaign of the Spanish Communist Party-dominated Unión Nacional [Unión Nacional Española (UNE)], striking from Occitania into a short-lived take-over of the Aran Valley in October 1944; this ended in the withdrawal of 129 guerrillas, leaving hundreds of wounded to be arrested and sentenced to death by the Francoists. Enric was part of one armed unit that struck into the Spanish interior from a base in Vallcebollera (Upper Cerdanya) and proceeding via Puigmal in the direction of Ripoll via Queralbs (Ripolles) before arriving in the Ripoll area as part of “Operation Reconquest of Spain”. He quit the Unión Nacional and, following harassment by Stalinist personnel he enlisted with the French forces occupying Germany but when the inter-imperialist Second World War ended he declined to join the French army.

He settled in Cervera de la Marenda (on the border on the route used by fellow anarchists and he joined forces with people-smuggler Pedro Soto who taught him a route for getting to the border via Banyuls, where Walter Benjamin had passed on his way to Portbou back in 1940. From 1946 to 1949 he helped smuggle fugitives and the clandestine press on several trips, aided especially by the anarcho-syndicalist Mora on the route from Cervera via Banyuls de la Marenda and Upper Emporda.

Towards the end of 1950 he moved to Toulouse (Haute Garonne, Occitania) where he worked in a bookstore.

He was active in the FIJL (Iberian Libertarian Youth Federation) and in 1953, following the refloating of the French Anarchist Federation (FAF) he took part in the Toulouse group of that organization, alongside Jean Galy (aka Lyg), René and Marcelle Clave and Marc Prévotel, among others.

In late 1960 he was made Culture & Propaganda secretary of the Liaison Commission of the FIJL in exile, with Marcelino Boticario Sierra as its general secretary.

At a secret meeting in 1959 beside the canal near the Montabiau railway station in Toulouse, he had a hand in the launching of the People’s Resistance Movement (MPR) along with Liberto Sarrau Royes, the latter’s uncle Salvador Sarrau Español, César, Luis Sos, Attentiste and a couple of anarchists who had travelled up from Perpignan. Within the MPR, Melich took charge of training young resisters. In the end, his job was to receive a few circulars from Liberto Sarrau and pick up the odd short arm. The Toulouse group also saw to the funnelling of cash through to the Algerian National Liberation Front (FLN) in Switzerland in 1960.

Around this point, a letter arrived at the headquarters of the Inter-Continental Secretariat of the CNT-AIT in Exile (4 rue Belfort, Toulouse) from the OAS, threatening the lives of Carballeira, Boticario, Borrás, Olaya and Melich.

After leaving the MPR, between 1962 and 1963 he played an active part in the anti-Francoist Defensa Interior (DI) and the CNT-FAI-FIJL Libertarian Movement’s Iberian Liberation Council (CIL).

By 1970 he was the Occitanian/Catalonia North agent for the Ruedo Ibéico publishing house and in 1974 he set up the ‘Spanish Bookstore’ in Perpignan, which was targeted by a bombing on 14 July 1976.

Following various splits within the ranks of the CNT during the later Francoist years, he worked with the ‘Grupos de Defensa Confederal’ and distributed Frente Libertario and in the end joined an anarcho-syndicalist group operating outside of the control of the Inter-Continental Secretariat (4 rue Belfort, Toulouse) or the organization based in the rue Saint Denis in Paris between 1975 and 1976. It had ties to Opción Libertaria in Barcelona, with Luis Andrés Edo, David Urbano and Pep Palau; from a warehouse in Perpignan, they published the review Acción Anarcosindicalista and had a hand in resurrecting the CNT in Catalonia.

From Perpignan at that time Melich was helping to smuggle published materials over the border and smuggle young anarchists wanted by the Francoists, especially via Cerdanya. Agustín Rueda, for instance, had digs above the bookstore and Palau worked there.

Melich would also have a hand in the publication of libertarian authors on behalf of the Nueva Senda Collection of the Picazo publishing imprint.

He also provided his own testimony to Eduard Pons Prades’s Republicanos españoles in la 2a Guerra Mundial (1975, reprinted 2003) and to the documentaries Vivir de pie, La guerras de Cipriano Mera (2009) and Boira Negra (2009).

On 16 May 2009 he took part in the “Homage to revolutionary Catalonia” held at the Lido cinema in Conflent. On 16 July 2011 he gave a talk on “The libertarian movement’s fight against fascism and for social revolution” as part of the functions organized to mark the “75th Anniversary of the Revolution of ‘36”. These were held in Granollers. Plus a number of book launches in Gerona, Salt, Barcelona and Campmany.

He twice took part in the Maquis Tribute March in Albera – paying tribute to Agustín Rueda in Coll de Banyuls and, among other things, he was a member of the “Granado-Delgado Trial Review and Pilar Vaquerizo Support Group”

In 2014 Editions Acratie released Enric Melich’s book, written with the assistance of his grandson Romain Melich. In À chacun son exil. Itinéraire d’un militant libertaire espagnole, covering three quarters of a century, from the day in February 1939 when the adolescent Enric was obliged to cross the Eastern Pyrenees in search of a haven on French soil, but that lengthy period did nothing to diminish the significance that life as an exile had had and was still having in his life. It took great courage to offer support to fugitives during the days of Vichy France back when he was just 16 or 17 years old, or to join the maquis under the nom de guerre Robert Sans when he was a little older, or to venture on to Spanish soil the way Enric did shortly after that, bearing arms in a unit that was to come under gunfire from the Francoist armed forces. Enric Melich was also brave enough to re-commit to the fight against Francoism during the 1960s when the FIJL’s Defensa Interior was organizing in an attempt to topple the dictatorship by stepping up its activities, or on the many occasions when he crossed the Spanish border in the 1970s in order to “smuggle out” comrades fleeing Francoist repression. One of the facets of the adventures recorded by Melich was that they afforded an insight into social realities that usually pass undetected in the studies of the professional historians, especially the facts that do not qualify as “macro-history” but are concerned with mind-sets or life-styles. This book was to be translated from French into Spanish as A cada cual su exilio. Itinerario de un militante libertario español and published by Virus Editorial in March 2016, with a foreword by Tomás Ibáñez.