Islands of anarchy: Simian, Cienfuegos and Refract 1969-1987, an annotated bibliography 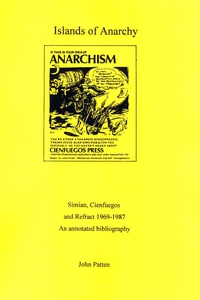 Simian and Cienfuegos came out of the anarchist resurgence of the nineteen sixties. Under the direction of Stuart Christie, the charismatic Scottish anarchist, they went from duplicated pamphlets to an ambitious book publishing programme. Cienfuegos (and later Refract) developed an international network of collaborators and supporters and an impressive list of titles recording anarchist history and advancing a practical libertarian critique of authoritarianism. Their achievements included the irregular but voluminous Cienfuegos Press Anarchist Review and the controversial resistance handbook Towards A Citizens’ Militia.