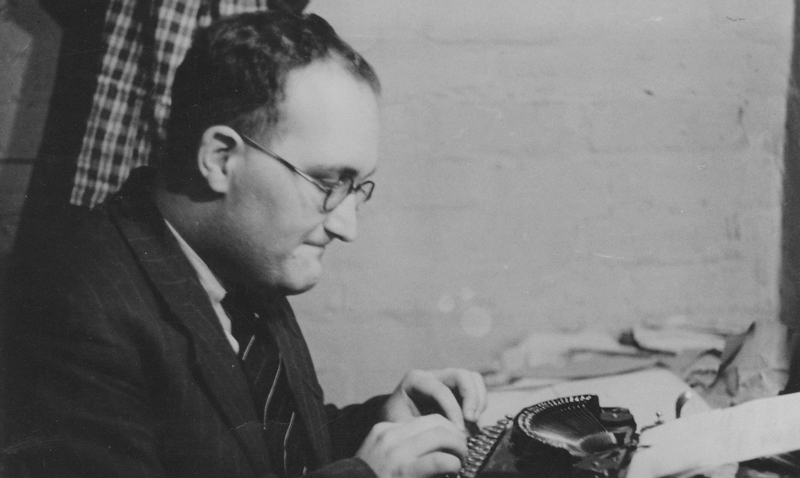 [This article of Albert Meltzer’s from 1952 is not a timeless classic, ready to be stuck in an anthology. Anarchist publications also need pieces which, even if they’re rushed or of the moment, are ready now. Barry Pateman’s piece on Mat Kavanagh and the history of anarchism (https://www.katesharpleylibrary.net/vdnf0f) explores that workaday writing a bit. This piece sheds a little light on how Albert’s style of discussion was formed in a movement where dealing with hecklers was a necessary skill, one where humour could be used for defence or attack. It’s funnier if you know that the ‘Internationalist’ who he damns with faint praise is Albert himself. Finally, it reminds us that nothing is ever simple: people don’t always respond in the same paper!]

In Freedom (Nov. 8th, 1952) Philip Sansom discusses the reasons why it is difficult to persuade workers to write. I know full well how qualified he is to speak of the difficulties entailed and the
recurrence of the under-inscribed initials in the columns of The Syndicalist is one more mute testimony to the powers of persuasion he brings to bear upon the subject.

However, I would suggest the reason “workers refuse to commit themselves on paper” is not so much because of the way such points are seized upon by the State in prosecutions. In any case, these attacks usually fall upon editors rather than contributors and it is most frequent that editors of revolutionary newspapers have faced prosecutions on charges relating to articles they had not even seen before their appearance in print, and occasionally even in relation to articles they did not print. The reason is rather more the difference between what is accepted heckling of a speaker and that attaching to a writer.

The speaker faced with a hostile or only indifferent audience can always answer his heckler, and feel the satisfaction entailed in finally silencing the objection. The advantage is entirely with him, because if the heckler wants to persist in his objections he is finally driven to making a speech himself (which is usually the last thing he intends to do). The old platform technique – “Come up here for five minutes” – is one way of doing the trick; but in any case the impossibility of keeping up a sustained barrage of objection soon daunts the most persevering heckler, who is at least beyond the “So’s your old man” stage. It is impossible for him, as a rule, to trip up the speaker on minor passing errors of argument, for to be able to do so he must think with the same rapidity – in short, be as capable a speaker himself.

How different with writing! The carping criticism one gets for articles from opponents or the lukewarm can never be silenced in so easy a fashion, and the article one dashed off on the typewriter to catch the paper going to press may soon be coldly dissected by many who have no necessity to think with the same rapidity or to measure their wits with yours. The stray expression used daily at work seems different in cold print. (Once having used the expression “Thank Christ”, a letter asks pointedly if the writer does, therefore, accept the divinity of Christ after all – as if the upper classes accepted the divinity of Jove when they swear by him.) If you write regularly on one subject which you happen to know something about, you will find that an occasional hostile reader regards you as a fanatic on that subject; if you write regularly on a subject which you consider important, though not necessarily having a specialised knowledge, you will be denounced as a “self-styled expert”; if you write about different subjects, you will be a dilettante, and you can only really escape criticism by not writing at all!

I have read in some other journals articles denouncing the anarchists because “they” preferred this novelist to that – basing it on a book review by a competent enough writer in Freedom who might well be right, but I had just not read either of the two novelists in question. Once, on the other hand, an indignant letter in another paper complained bitterly that in an article in Freedom I had only “spoken for myself”, as if there was anything else I could do.

No, so far as the militant worker is concerned, I do not think it is the natural reluctance to writing that is altogether responsible. The reluctance to self-expression based on compulsory sausage-machine education inhibits many from writing or from speaking, but there is another reason for the particular reluctance to writing too, namely that we never know how to squash the heckler, unless he is so rash as to commit himself to a letter to the editor of the same paper as that for which one has written.

However, I do not want to discourage any anarchists who are determined to spread their views by the written word, but then, nothing could. I can only suggest they take heart at the undaunted example of “Internationalist”, the brilliance of whose comments on foreign affairs might well silence the most captious critic who had not seen him gazing across from the end of Southend Pier under the impression that he was studying the coast of France.