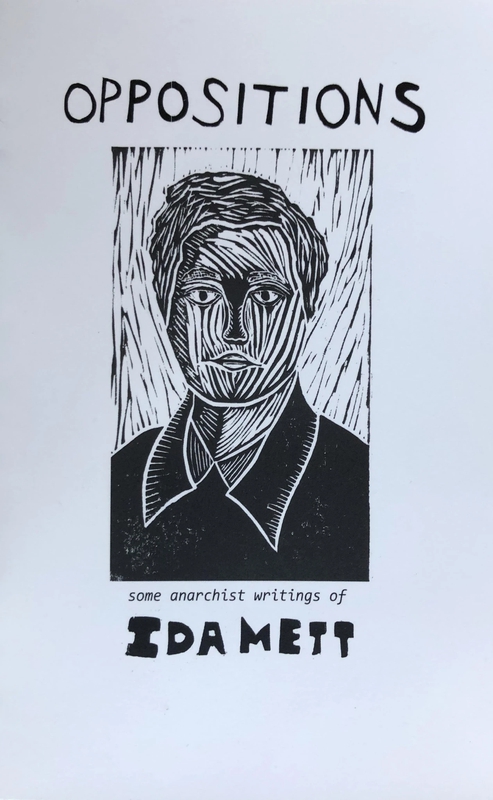 This chunky pamphlet gives us ten articles by Russian-born anarchist Ida Mett, most written in the 1930s. ‘They are, sometimes, written on the run or with the barest information to hand but all of them reflect someone who is searching for ways to understand the nature of power and how anarchists can combat this power. Much of these writings contain sparks of hope at a time when darkness appeared to be suffocating anarchists and their ideas.’ (9, from Barry Pateman’s biographical sketch)

The editors have resisted the temptation to focus solely on the best-known events, the ‘bright lights’ of anarchist history like the Spanish or Russian revolutions. They are here, and her protest ‘The French Popular Front Stalking The Spanish Refugees’ is proof that solidarity and internationalism were principles, and not just slogans, for Mett. Her writings on Russia have some fascinating revelations.  The final piece (Oppositions: Standing Up To Dictators, from 1954) shows how literature (Zorin’s play The Guests) reflects the freer and more critical atmosphere after Stalin’s death: ‘Varvara also states: “God, but I detest the bourgeois.” From the script it is obvious she is referring to Soviet bourgeois.’ Mett then switches to sharing how ‘the German journalist Brigitte Gerland, freed from the Vorkuta camp just last year, bumped into young students in the camp who subscribed to anarcho-syndicalist beliefs.’ (57)

Mett’s solidarity with her comrades in Spain and Russia did not prevent her from acting where she stood, and Oppositions sheds some light on the history of anarchism in Belgium. Her writings on anti-fascism in Belgium criticise the Socialist party’s embrace of the ‘lesser evil’ and she points out ‘in the Borinage and around Liege and in the port of Antwerp, the folks who brought us July 1932 and June 1936 are still around. That is the great unknown but at the same time the great hope: the latent and spontaneous forces of the proletariat.’ (17)

I found the approach of the editors (Steimer Press) heartening:

‘Anarchist history, to be worthy of the designation, must differ from ruling class history in much the same ways that anarchists oppose the rulers themselves. We don’t seek to replace their cops with our cops, or old privileges with new ones. And we shouldn’t try to replace their statues and idols with a new list of saints and enshrined icons.

‘But this is not an argument against knowing our history, or for throwing anyone under the proverbial historical bus. […] We just want more: more stories of more people who chose to put their lives and liberty on the line to advance the cause of life and liberty for all. The ultimate movement against hierarchy and all forms of oppression should read as broadly and horizontally as possible, while still remaining true to our ideals. After all, every one who has actually spent significant time in anarchist circles and spaces knows that the day to day work of anarchism – free food hand outs, political prisoner support, mutual aid work, making zines and posters etc – is what the movement is really about. It is the regular people that choose to show up week after week, year after year, to do this unpaid, unglorious, and sometimes dangerous work who are not only the backbone of the movement, but its heart and mind as well.’ (5)

Steimer Press (named for Mollie Steimer, but that’s another life-story) have given us the chance to learn about Ida Mett’s anarchist life. Lets see what they do next!