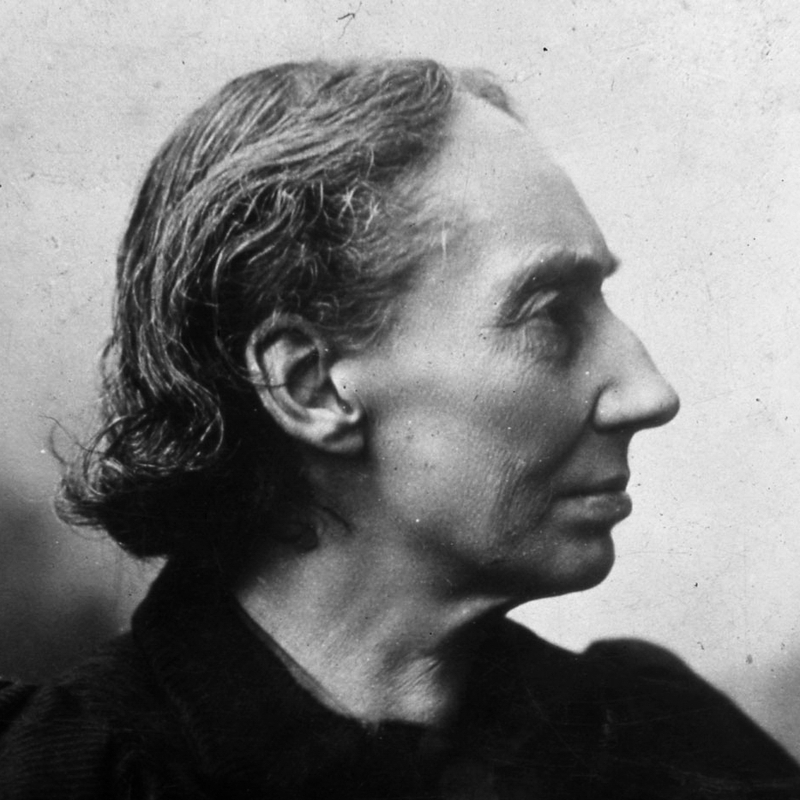 And so here is Louise Michel. She is a menace to society, for she has declared a hundred times that everyone should take part in the banquet of life. What would be the pleasure of riches if one were unable to compare one’s own well-fed condition to that of people dying of hunger? Where would the feeling of security come from if one were unable to compare one’s good, solid position to that of people who must work in poverty?

What is more, Louise Michel is a woman. If she could only be fooled by the idea that women can get their rights by asking men for them. But she has the villainy to insist that the strong sex is just as much a slave as the weak sex, that it is unable to give what it does not have itself. All inequalities, she claims, will collapse when men and women engage in the common battle together.

Louise Michel is a monster who maintains that men and women are not responsible for their situations and claims it is stupidity which causes the evils around us. She claims that politics is a form of that stupidity and is incapable of ennobling the race.

If Louise Michel were the only person saying all this, people could say she is a pathological case. But there are thousands like her, millions, none of whom gives a damn about authority. They all repeat the battle cry of the Russian revolutionaries: land and freedom!

Yes, there are millions of us who don’t give a damn for any authority because we have seen how little the many-edged tool of power accomplishes. We have watched throats cut to gain it. It is supposed to be as precious as the jade axe that travels from island to island in Oceania. No. Power monopolized is evil.

Who would have thought that those men at the rue Hautefeuille who spoke so forcefully of liberty and who denounced the tyrant Napoleon so loudly would be among those in May 1871 who wanted to drown liberty in blood? [1] Power makes people dizzy and will always do so until power belongs to all mankind.

Note
1, A swipe at moderate republicans who opposed the Paris Commune: ‘Among the people associated with the [education centre on] rue Hautefeuille was Jules Favre. At this time he was a true republican leader, but after the fall of Napoleon III he became one of those who murdered Paris. Power would poison him as it poisons all who are clothed in that cloak of Nessus’ (p.50)

From: chapter 7, ‘The decaying empire’ in The Red Virgin: memoirs of Louise Michel, edited and translated by Bullitt Lowry and Elizabeth Ellington Gunter. (page 52). This extract appears courtesy of the University of Alabama Press. Image source: https://fabienribery.files.wordpress.com/2017/08/louise-michel-profil-2.jpg. Translated by: Elizabeth Ellington Gunter and Bullitt Lowry.