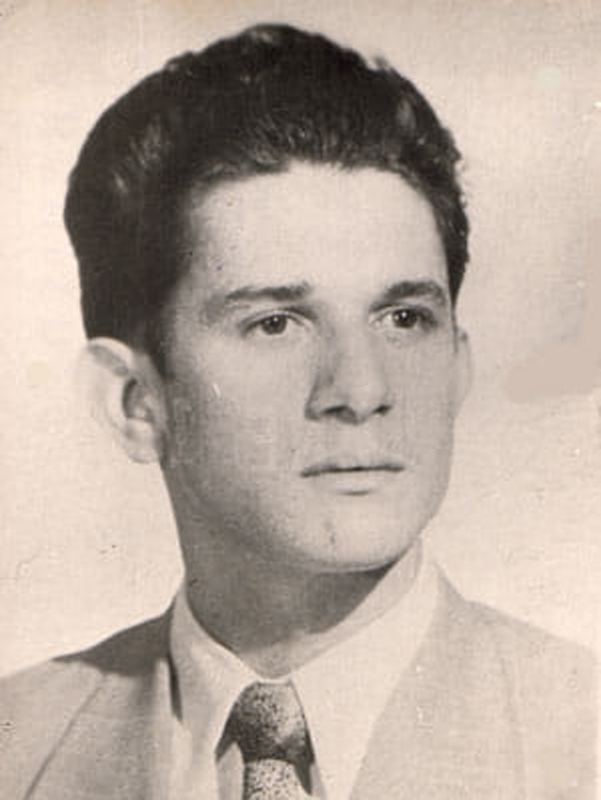 Boris Santa Coloma, trade union activist, anarchist and member of the resistance to Fulgencio Batista’s brutal dictatorship, was killed in the attack on the Moncada barracks in Cuba.
Born in San Nicolás, he received his schooling in his home town before moving on to Instituto No 1 in Havana, where he studied business science. He supported himself by working for various companies in the city up until he secured a job with the Frigidaire multi-national, where he engaged in trade union activity through the UST (Workers’ Trade Union), earning the respect and sympathy of his colleagues. He then ran into difficulty with management for having stood up for the workers’ rights and that led to his being sacked.

Looking around for a new job to support himself, he secured a position with a small company, which is where he was working when Fulgencio Batista’s shrewd coup d’état struck on 10 March 1952.

Like other young people, he set off for the university in search of the weapons require to confront the coup, but those weapons never came. It was on the slopes of the hill where the university sat that he met Haydée Santamaría[1] that same year at a ceremony to commemorate the execution of a group of students from the Faculty of Medicine. Haydée Santamaría then became a friend of his and his comrade-in-arms.

A month after Batista’s military coup, Boris penned a letter to the tyrant, bravely accusing him of thievery and embezzlement of state funds.

He identified with the wishes of those whose dreams were of a better, free, sovereign Cuba on behalf of which so many Cubans had spilled their blood in the manigua.[2]

Along with Fidel Castro and Abel Santamaría[3], he orchestrated the raid on the Moncada barracks in Santiago de Cuba. Reinaldo Boris Santa Coloma was a straightforward, honest, tireless fighter for justice, equality and freedom in Cuba. In his view the armed struggle was the only way of genuinely shrugging off the yoke that the Batista dictatorship had imposed on Cubans.

On 26 July 1953 he left Havana to keep his date with destiny, bidding his mother farewell and informing her that he was on his way to the beach in Varadero. On 26 July he was at Fidel Castro’s side in the attack on the Moncada barracks. Once the element of surprise had been lost and fighting on became impossible, Santa Coloma and a number of fighters managed to withdraw as the command had no desire to see pointless sacrifice of their companions in misfortune. Survivors recounted that once outside the barracks, they made their way to the Saturnino Lora hospital to retrieve their wounded comrades, only to be ambushed and taken prisoners. Like Abel Santamaria and other combatants, Reinaldo Boris Santa Coloma was viciously tortured and then murdered, but the dictator’s goons failed to get a single word out of him, nor would be betray his comrades. He was a victim of the forces of the dictatorship, the very same dictatorship responsible for the death of the libertarian activist Manuel Rivas.

The history of the resistance to the Batista dictatorship in the early days of the Cuban revolution is marked by the significant contribution made by the anarchists through the Cuban trade union movement.  The libertarians made their presence felt during the general strikes that brought the island to a standstill in the most crucial moments in the revolution.  Besides the contributions of labour activists like Santa Coloma, we might recall the active involvement in the resistance to Batista of anarchist comrades of the stature of Gilberto Liman and Luis Linsuaín, as part of the Eastern Front during the 1959 revolution, or people like Plácido Méndez within the Escambray Front. The urban resistance was hosted by the Cuban Libertarian Association’s premises in Havana during conspiratorial meetings with the 26th July Movement[4] and the Revolutionary Directory[5].

1, Haydée Santamaría Cuadrado, b. 30 December 1923 in Central Constancia, was a guerrilla and leading light of the 1959 Cuban revolution. She founded and then managed the Casa de las Americas, state cultural agency. She committed suicide in Havana on 28 July 1980. Haydée Santamaría was renowned for her part in the attack on the Moncada barracks, as a result of which action she was imprisoned.

2, In Cuba the manigua means something akin to the maquis in France. The manigua was a safe haven for the pro-independence fighters of the 19th century eager to expel the Spaniards from Cuba and for the Cuban revolutionary fighters in the 1959 revolution.

3, Abel Santamaría Cuadrado, b. in Encrucijada on 20 October 1927, was a Cuban revolutionary political militant. He was the brother of Haydée Santamaría, with whom he had been involved in the attack on the Moncada barracks, where he was captured, tortured and murdered.

4, The 26th July Movement (or M-26J) was set up in the summer of 1953 as a way of regrouping the survivors following the bloody failure of the raid on the Moncada barracks in Santiago de Cuba on 26 July 1953. The attack on the Moncada barracks had been an attempt by Fidel Castro and his comrades to storm a barracks in Santiago in Oriente province, Cuba. The operation failed and cost many lives.