Paradox Part Two: the Diehards and the Cross-Border Action Groups 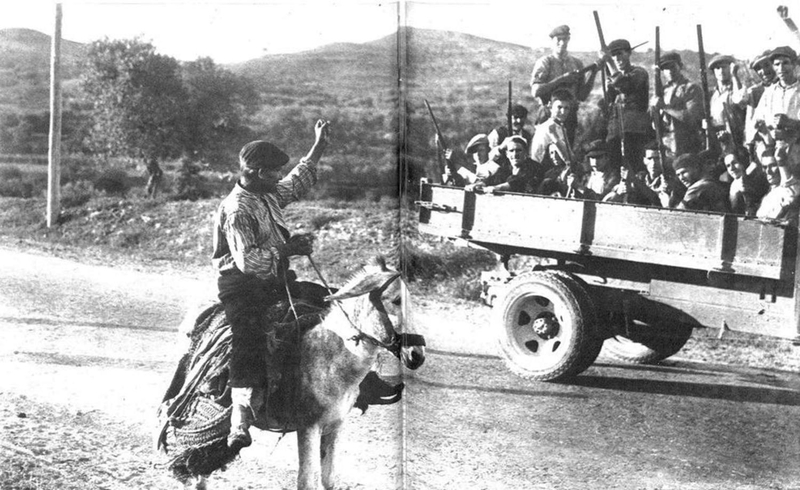 In Part Two we focus on the people who made up the anti-Francoist action groups, mostly operating inside Catalonia after having served on the civil war battle-fronts and subsequently fighting the Nazis …

Greeting to my readers who dip in and out of this blog dealing with the forgotten and the dis-remembered. It being now summer-time in the August sunshine. Today we carry on with part two of our piece on the Diehards. Whereas Part One concentrated on the people-smugglers from the Ponzán network, the physicians and other guides, Part Two will be devoted entirely to those who, following the civil war and their parts in the French Resistance, joined a range of guerrilla bands generally operating within Catalonia, between the end of World War Two and the 1950s.

Special mention must go to the group led by José Luis Facerías. On the basis of the database of diehards accessible to me and since every 30 August I take part in the commemoration of him in Barcelona on the anniversary of his death in 1957, we shall monitor the steps taken by “Face” and his comrades. By way of a well-deserved homage to that libertarian fighter and all who shared in his adventures and misadventures.

Lest I break ranks with my usual disorderly style, let me reiterate some of the already mentioned in Part One; with the benefit of hindsight, I can see that I ought to have held them over until this Part. But as it is now too late, I shall place an asterisk beside their names to help identify them.

So, without further ado, let us follow the trail of this new band of diehards …

Anybody asking about pretty much well-known anarchist maquis will have come up with the names of Facerías and Sabaté. Although Facerías was not in the French Resistance, several of his activist comrades were and we shall turn to them today. The Aragonese Jesús Martínez Maluenda aka el Maño, Face’s usual guide, deserves to be mentioned first. During the civil war el Maño had served on the front lines with the Solidaridad Obrera Column. After going into exile, he joined the French Resistance in the Haute Garonne department, a department in which lots of Spanish libertarians saw action. When the World War ended, he familiarized himself with the Pyrenean trails with the best of teachers, the Catalan guide Ramón Vila Capdevila with whom he was thereafter connected by a huge friendship. In addition to such practical efforts, el Maño carried out missions as the CNT’s courier and even too part in certain actions with Facerías’s group.

Ramón González Sanmartí aka el Nano was involved in the fighting in Barcelona. He had later marched of to the front with the militia columns, as part of the Roja y Negra Column, only to finish the war as part of the 26th (formerly the Durruti Column) Division. He suffered in the French camps and joined the Foreign Legion, only to end up in one of the maquis groups in the Herault department. After joining the action groups, he ended up in Face’s group and lost his life in an ambush in the Calle Tallers in Barcelona in June 1948.

José Iglesias Paz aka Alberto Casademunt fought in the Tierra y Libertad Column. Once in exile he was deported to Germany but contrived to take part in the liberation of Paris alongside a lot of other Spanish republicans. He worked with Face’s group in the late 1940s before being arrested in May 1950. After enduring 17 days of torture, he was jailed and sentenced to a 30-year prison term before being released in 1961.

Francisco Martínez Márquez aka Paco served in the so-called Youth Battalions during the civil war. In exile in France he joined the resistance, serving initially with the Belves maquis and later with the renowned Libertad Battalion, serving in the latter right up until May 1945. Once the World War was over he joined the action groups, taking part in the ‘Tres de Mayo’ group, Sabaté’s group and Facerías’s group. He lost his life during the dark days of October 1949 in Barcelona’s Calle Rosellón, after he was gunned down by members of the BPS.

Mariano Puzo Cabero served in the Barbastro militias and later joined the Roja y Negra Column, as part of its guerrilla teams. The end of the civil war found him in Alicante and he was held in the Albatera camp. He managed to escape under a false identity and to cross into France. Things here were no better as he finished up in the Saint Cyprien and Barcarés camps. On his release from the camps, he joined the maquis in Saillagousse in the Pyrénées Orientales department, serving up until the end of the war. Based in Perpignan he joined the action groups, Facerías’s action group to be precise, up until in a freak incident in Más Tartas, the guerrilla base right on the border, he was seriously injured (losing his left forearm and right thumb) when a grenade exploded. From then on he acted as guide and trouble-shooter for the ‘Perpignan Group’.

Alberto Santaolaria Frauca aka Castelló served in the anarchist columns on the Aragon front. After the civil war was lost, he crossed into exile and joined the French maquis, although what he got up to on French soil we do not know. What we do know is that he eventually joined the Libertad Battalion, along with several hundred other libertarian guerrillas. A close collaborator of Laureano Cerrada, he was part of Facerías’s group and was arrested on 31 July 1948 in Barcelona. Though sentenced to a 25-year jail term, he was freed in October 1958.

And to finish off the list of the group’s members and collaborators, there was Josep Pujol Grúa, the Catalan doctor who was a great pal of Facerías’s and medic with the Roja y Negra Column during the “Spanish war”. After he crossed into exile, he served as a physician in the French camps and was a top security asset of the French Resistance. He worked with the action groups in Barcelona and was then smuggled into France by Facerías himself after having treated the guerrilla Juan Cazorla.

So much for the Facerías group. Now for our other old acquaintance Francisco Sabaté Llopart aka Quico, possibly the best known of the anarchist resisters. We shall not dwell here upon his long anti-Francoist trajectory as it is too well known. Among other units, during the civil war he had served in the Los Aguiluchos Column and the Durruti Column. Evacuated to France along with the latter, he also did his bit against the German invader, working with the escape lines operating in the Vallespir area and later with the resistance in Angoulême. Once the World War was over, he was obsessed with taking on the Franco dictatorship head-on and did so actively up until 1960, in which year he was shot down on the streets of Sant Celoni.

One of his earliest comrades was Juan Salas Millán aka el Roset who had, during the civil war, served in the guerrilla teams operating behind the Francoist lines. In France el Roset worked on the Atlantic Wall fortifications and from there enlisted in the local resistance. He slipped into Spain with Quico but was arrested in 1946. He received two death sentences (later commuted to two 30-year terms after a bribe had been paid) and was released from prison in the 1970s.

Now to a different group but one that operated in Barcelona as well.

Enrique Coma Casas served in the Durruti Column as a militian during the civil war, only to be arrested at its conclusion and jailed in Bilbao from where he managed to escape and made his way to Andorra. Imprisoned in the Le Vernet camp he escaped a second time and joined the resistance, ultimately taking charge of the people-smugglers working for the Combat network. Come the end of the war, he joined the action groups operating in Catalonia, as part of José Pareja’s group, among others. Arrested in 1946, he served ten years behind bars.

Miguel García García aka Seco fought on the Aragon and later on the Madrid front. In the early 1940s he was trained as a forger by the British Secret Service and was involved in the very first groups in Barcelona; in France he worked with the escape lines. In the late 1940s he was a member of the Los Anónimos group and, later still, of the Talión group. On 21 October 1949 he was arrested in the Calle Cabanés in Pueblo Seco and remained in prison until 1970.

Teruel-born Manuel Martínez was the very first patrolman in Barcelona and later enlisted in the Durruti Column. After the war was lost he left for exile and joined the French Resistance, albeit that we do not know the group or department he was involved with. Once the Nazis had been defeated, he re-entered Catalonia, operating under the supervision of Marin Nieto. In February 1946 he was captured as a part of a dragnet operation in the Calle de la Cera, was jailed and died in Burgos prison in March 1955.

Miguel Silvestre Talón aka el Nano was a born sportsman; in fact, he was a Greco-Roman wrestling champion. During the civil war he was a militiaman with the Durruti Column. After the war he moved to France, quickly joining the escape lines and taking part in the liberation of Toulouse. Once the Germans had been defeated, he acted as liaison between Toulouse and Barcelona, until his body turned up – drowned – in the Canal du Midi, stuffed into a sack tied up with barbed wire and with a bullet in the back of the head, on 17 April 1946. What was behind his murder is not known, any more than the identity of his killers.

I have very little information about José Suárez, albeit that the little I do have is very interesting. We know that he served on the Aragon front, but do not know where or in which unit. We know that he fought in the French Resistance but again, we know not where nor in which unit. He was arrested by the Nazis and shipped off to Germany, escaping from the Neuengamme camp. He made it as far as Belgium, only to be rearrested and dispatched to Berlin. From there he escaped again. When the war ended, he was involved in the Catalan groups, but again we can offer no details.

To conclude, let us leave Catalonia behind and look to Aragon.

Alejandro Tiburcio Pueyo served in a machine-gunner company in the civil war. Once that was lost, he crossed into France, working as a forestry worker in the Pyrénées Orientales department, where he joined the maquis. He turned up in the late 1940s in Quico’s group and was later with a group made up of Aragonese; it slipped into Spain via Ordiceto in 1949 and it took a real odyssey to get him back to France.

In Part One of this article we mentioned some names that were actively involved in the action groups, people like: Pere Adrover Font aka Yayo*, Joaquím Querol Marzá*, Ramón Claret Gual*, Domingo Ibars Jaunías aka Roset*; or José María Vllegas Izquierdo*.

So much for Part Two of Paradox; Part Three will deal with those libertarians who took part in the cross-Pyrenean invasions of late 1944, but that, dear readers, is a different story.

El Salto, 28 August 2020 https://www.elsaltodiario.com/ni-cautivos-ni-desarmados/los-irreductibles-y-los-grupos-de-accion-transfronterizos [Image - Imanol, a salute to the militia on the way to the front]