A Letter of Aron Baron from the Solovetsky Islands 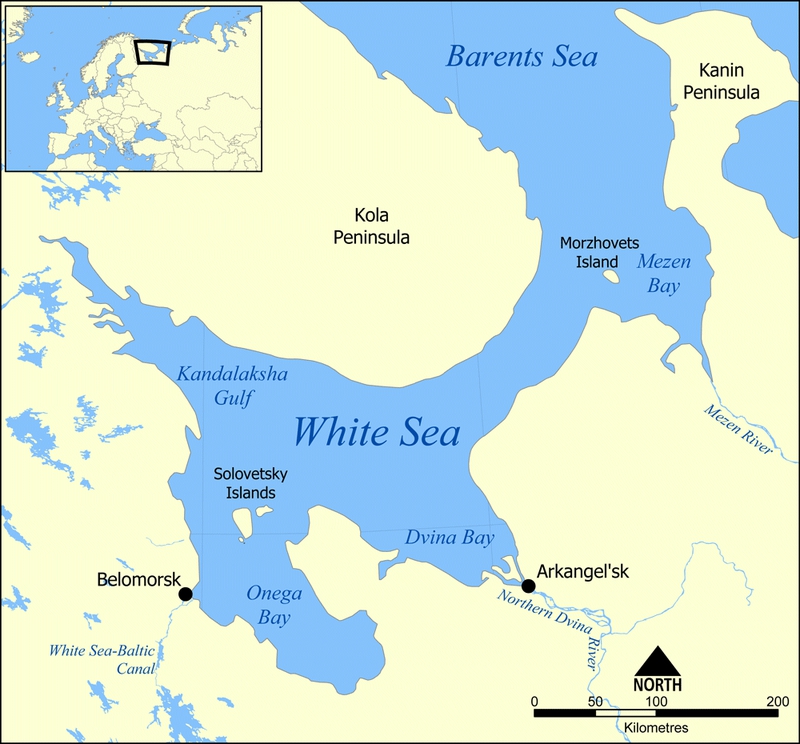 In January 1923 Aron Baron was sentenced to two years in prison, to be served in camps of northern Russia. After passing through two camps on the mainland, he eventually arrived in Solovetsky, an archipelago of six islands in an arm of the White Sea, where hermitages built for monks had been converted into concentration camps. The Soviet regime had first used Solovetsky for common criminals and counterrevolutionaries, but in 1923 two hermitages, Muksol’ma and Savvat’yev, on different islands, were reserved for political prisoners. The exact date of Baron’s arrival at the Muksol’ma hermitage is unknown, but he was evidently there when a horrific event took place at the Savvat’yev camp in December 1923. Several prisoners were gunned down while making a peaceful protest. News of this event soon spread abroad, but it was only a harbinger of worse things to come during Stalin’s regime.

Baron’s letter was written ostensibly to a former sweetheart in Berlin named Julia. But annotations on the letter indicate that Julia was actually Mark Mrachniy, an old comrade who was helping Alexander Berkman in Berlin with support work for anarchists in Soviet prisons. Baron and Mrachniy had been leading members of the Confederation of Anarchists of Ukraine (Nabat) and both had taken part in the Makhnovist movement (although at different times). The other personages mentioned in the letter are identified in endnotes.

Aron Baron was released from Solovetsky in January 1925, but not to freedom. He was sent to serve a further term as an exile in Siberia.

My dear beloved. Immediately upon receiving your letter of the 11th of July, I sent a reply to you by return post about the state of my health, affirming that I am still your same Aron as you knew me earlier and that the years of sorrowful separation could alter nothing in my relationship to you. By my reckoning, I should have already received an answering letter from you by now, but there is none and that is beginning to worry me. It’s true you mentioned that you lost your job, and I know from the newspapers what kind of unemployment and terrible starvation you have now in Germany. So now I’m worried, and I’m writing a second time, by registered mail, in case my earlier letter, for whatever reason, did not reach you. They say the postal service is functioning normally in Russia now, but I don’t know anything about the reliability of the German post office.

It would be nice to talk with you about lots of things, and I know that epistolary conversations are satisfying neither to me, nor to you. Hopefully we’ll meet again sooner or later in freedom, and then we’ll make up for lost time. There are some quarrels and squabbles happening here, which it’s embarrassing to write about (and resulted in 15 people being transferred here from Savvat’yev). But, in spite of everything, I remain in good spirits and healthy, and am looking after myself. [1]

I am receiving from America the central communist organ – the newspaper Daily Worker – and am able to follow the course of American life on a day-to-day basis. I must confess that I would be very, very grateful if one of my acquaintances, or one of your acquaintances – someone sufficiently kind-hearted and well-off – bought me a subscription to the French communist newspaper Humanité for two or three months. This newspaper is most likely permitted; it’s necessary only to pay for a subscription in my name, and I will then derive great satisfaction in gleaning information from a primary source about life abroad. I’m not suggesting, my dear, that you pay for this yourself, but I implore you to arrange this with some “rich uncle” who’s willing to relieve himself of a couple of francs on my behalf.

As for Germany, its newspaper is of less interest to me; however, if you happen to get back to work and accumulate some money, then send me, when you can, any kind of interesting book, journal or brochure in the German language – something fit for Soviet Russia.

Write, my dear, more about yourself and about Ksima [2]. How is she getting along, poor woman. I heard that your old man [starik] [3] doesn’t want to know us and has even left you completely. Admittedly, I would want to know more about all this. Well, that’s it for this time. I can’t pass along any pleasant news about our life. Alesha [4] arrived not long ago, but I haven’t caught up with him yet. Everyone here who knows you sends greetings and asks that you don’t forget to write often and more about yourself. Good-bye, beloved, don’t be sad. Thousands of greetings to you and Ksima.

1 In the first half of the 1920s Aron Baron was imprisoned most of the time, took part in several hunger strikes, and even attempted self-immolation in protest of prison conditions.

2 Grigori Maksimov, well-known anarcho-syndicalist, was living in Berlin in 1924, after having been expelled from the USSR in 1922.

3 Vsevolod Volin, who had been living in Berlin after being expelled from the USSR, moved to Paris in 1924.

4 Aleksey Olonetskiy was one of the seven anarchists released from prison to attend Kropotkin’s funeral in Moscow in 1921. Aron Baron was also one of the seven, as was Mark Mrachniy, to whom this letter was written.