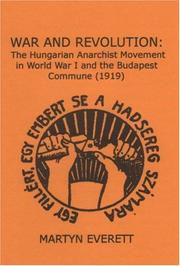 The Budapest Commune of 1919 has been neglected by the historians of anarchism, yet it provides An important and fascinating case study of the anarchist movement at a crucial historical moment. We can see how and why anarchist fortunes declined after the end of the First World War, as anarchist organisations fused with marxist parties, or were crushed by proto-fascism.