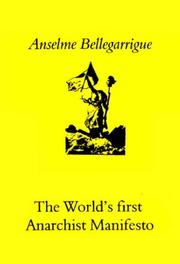 The first Anarchist manifesto, written in 1850, declares ‘Anarchy is order, whereas government is civil war’ and argues – with language as sharp even now as any against the delusion that voting does any good for anyone but politicians and puts the case that the established power structure is a gigantic crime against humanity.

Every individual who, in the current state of affairs, drops a paper into the ballot box to choose a legislative authority or a executive authority is – perhaps not wittingly but at least out of ignorance, maybe not directly, but at least indirectly – a bad citizen. I repeat what I have been saying and take back not a single syllable of it.

An introduction by Sharif Gemie places Bellegarrigue in his social and political context of the struggles for emancipation following on from the French revolution.