Join the Professionals: The army of the unemployed 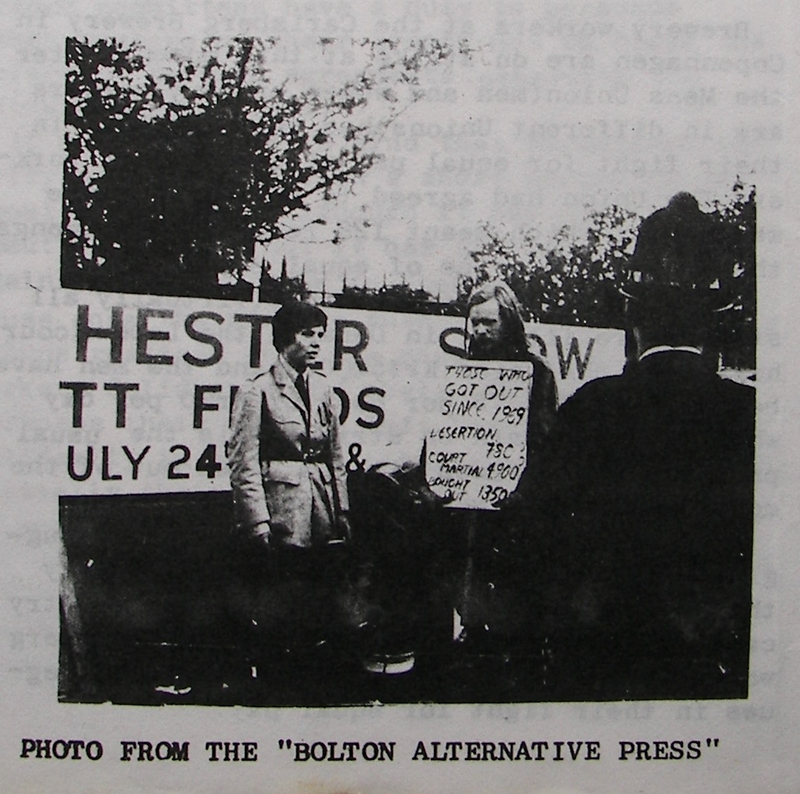 As the unemployment figures zoom ever upwards in the North West, the army has been having a field day with their recruiting. Manchester has proved to be very good indeed for these vultures who were boasting in the columns of the Evening News of their success.

However, there is another side to the coin, since the Irish troubles started there have been 780 who deserted, 1350 who bought themselves out and 4,900 Court Martials. No doubt all this accounts for the State’s attitude to the BWNIC’s [British Withdrawal from Northern Ireland Campaign] leaflet ‘Some information for discontented soldiers’ and to recent arrests at the show in Platt Fields Park Manchester, where the army were putting on a display. Six members of the Liberation theatre group were arrested and charged with insulting words and behaviour. Bail was refused, and when the group appeared in court the police asked that their finger prints should be taken. The prosecution demanded a remand in custody until 29th. July. It was reported in court that a report would be sent to the D.P.P.[Director of Public Prosecutions] suggesting a charge under the 1934 Incitement to Disaffection Act. The penalty is up to 2 years in jail, or life if conspiracy is added. It is thought that the Police will wait until after the trial of the BWNIC 14 in September, to bring the further charge of incitement.

Many young men may feel that life in the Army would be preferable to life on the dole. The adverts stress the money to be earned and the adventures to be had. With unemployment standing at 1,250,000 the temptation must be very great if you’ve just left school with no prospect of a job: You can see all the desirable things to be had if you’ve got the money: motorbikes, stereos, clothes, entertainment.

Most other countries in the Common Market have conscription, which Britain has now discontinued, and therefore relies on a volunteer Army. This consequently makes the State extremely sensitive to interference with their recruiting programme. However, most of the anti-militarist propaganda tends to the academic or moralistic, missing any real appeal to working class youth.

The basis of any anti-military campaign must be that of approaching young, who make up the cannon fodder of the Army, on the terms of their everyday lives. We have to give a meaningful answer to their demand for adventure, and a wage that’s more than the pittance of the dole.

This type of campaign would concentrate on the positive wants of the unemployed. It would be a campaign that highlighted such items of news as that of the ill-treatment of young soldiers at Brassington Camp, in Cambridgeshire. Trainees were punched and kicked by N.C.O.s. A soldier who collapsed while carrying a 56lbs pack on a route march was denied a drink of water. Others were tipped from their beds, and then punched for not having them made up.

A soldier may get good pay, but he’s on call 24 hours a day. His time is never is own, he’s subject to Army authority at all times. What appears to be a good wage for 8 hours work is not so good for 24.

As for the adventure, it’s not all sandy, palm covered beaches, yachts in summer and a bit of skiing in the winter. The British Army’s trips abroad aren’t usually to the holiday resorts. Belfast isn’t number one at the travel agents, and it’s not because of the high rainfall. The Army doesn’t exist to do you a favour, it’s a force of repression, not a holiday club. The discipline of the Army is there to make you more afraid of the officers and the N.C.O.s than the enemy (whoever they are at the time). However it is not for us to moralise, there is no Recruiting Sergeant better than unemployment.

However, the way forward is to relate the soldiers’ situation to that of the class struggle.

Photo from the “Bolton Alternative Press”

[See Report in Peace News about the not guilty verdicts on the BWNIC 14 (December 1975): https://peacenews.info/node/8240/40-years-ago-expensive-production-big-flop and from Past Tense https://pasttenseblog.wordpress.com/2016/12/10/today-in-military-history-14-pacifists-acquitted-of-incitement-to-disaffect-soldiers-1975/]