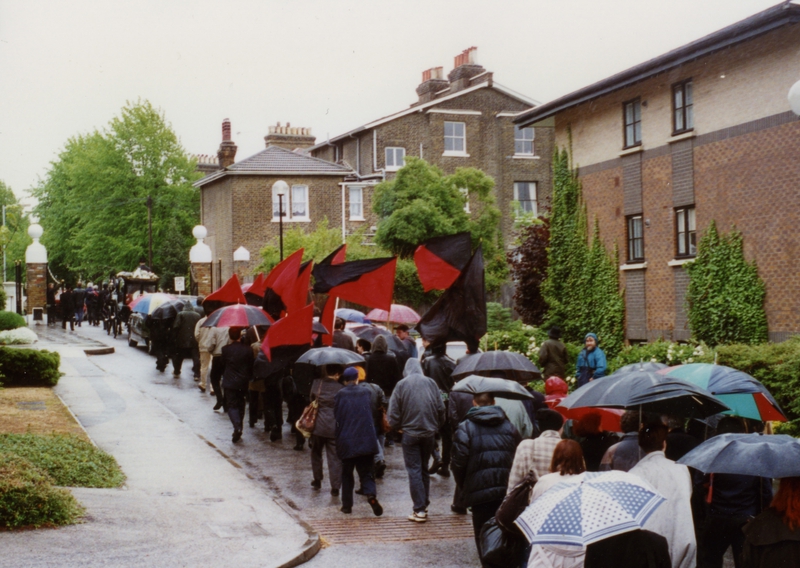 It’s twenty years since Albert Meltzer died. Since I was there, I’d like to share what I remember. I went to the Solidarity Federation conference in Weston-super-Mare in 1996. I had a book of Nestor Makhno’s essays and a return ticket. I was there on the final morning, I think all the conference stuff had been done, and people were gathering in the lounge. Albert suffered his stroke. I went with him in the ambulance. It seemed the obvious thing to do, since I’d known him for several years.

The hospital was on the edge of town, low rise with small trees round it. I well remember the ward and its waiting room. I went in everyday, I can’t remember for how many days. I remember eating in the canteen, so I assume there were morning and afternoon visiting hours. Albert never regained consciousness, but he’d move in his sleep.

I also remember the hill over the road, which was a bit of a refuge for me. There were cowslips in the grass, a church and the stump of a windmill. The ridge of rock carried on to make an island out in the channel. I can hardly remember anything more about what else I did, though I did meet up with a local comrade.

I looked at that book of Makhno essays recently. The bookmark was a single ticket back to Weston-super-Mare. I must’ve gone away to give in my notice and move my stuff. The next day I got a phone call at breakfast time from Stuart to say that Albert had died. That was the 7th of May. After that, I stayed in Albert’s flat in Lewisham and did whatever I could to help Stuart and Simon. They had their hands full, given that they had the funeral to organise – horse-drawn hearse, jazz band and all. And that was just the procession.

We gave Albert exactly the send-off he wanted. A full house, and no worthy cliches. The thing I remember best is the comedian. Noel James did a comedy routine at the crematorium. I don’t know if this was planned, and he had nerves of steel, of if this was a beautiful ad lib. He turned his soft guitar case into an elephant’s head (the neck of the guitar making the elephant’s trunk) and launched into a long and very involved anecdote, taking it to the point where no-one knew what he was going on about. So he stopped. “If I’m going to die on stage, I’m in the right place, aren’t I?” That brought the house down.

Less amusing was the carping in print (or was it sniping?) from some of those associated with Freedom Press at that time. We probably shouldn’t have been surprised, given the long-standing disagreements involved. It was distasteful and it felt to me that there was arrogance as well as bad timing involved. It was insinuated that Albert’s support for the Spanish resistance, or Stuart Christie in particular, was imaginary. The Albert Memorial: the Anarchist Life and Times of Albert Meltzer by Phil Ruff with contributions from other comrades (1997) corrects some of these ‘misunderstandings’.

Sometimes I regret that Albert isn’t around to laugh at some of the epic missing-the-point that you see in academic writing about anarchism. I’m sure he’d have been amused to hear a contemporary professor tell him that as he’s not a philosopher, he’s not qualified to contribute to anarchist thinking! Of course, his comrades – and those he has inspired – would beg to differ.

Though we miss him, we shouldn’t be sad. He lived – and enjoyed – a life devoted to a cause. The tributes paid to him after his death give some indication of his contribution. And what did he leave undone? His autobiography tells us (as with the sign-painter in Heinrich Heine’s short story): he never did paint any golden angels. But who would have it any other way?

A video of the funeral procession, service and wake is on Stuart Christie’s facebook page: https://www.facebook.com/photo.php?v=5128681754252…