The Labadie Collection has recently announced that the Federico Arcos papers are now open. Arcos, after playing his part in the Spanish Revolution and the postwar resistance moved to Canada. There he connected new generations to anarchism and, to them ‘became one of our most cherished elders’ (David Watson in his tribute to Federico).

One of the items pictured in the announcement was a letter from Federico to Albert Meltzer after the death of Miguel Garcia (two other figures who connected new generations with anarchism as a living tradition). We’re pleased to reprint it here. 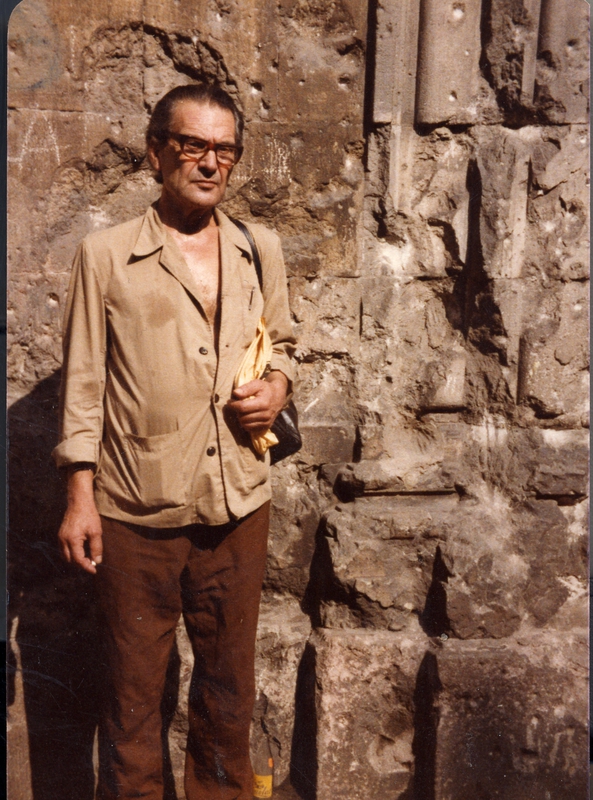 Years have gone by since that day when I spoke to you by phone from Angel Alley[1] and went to meet Miguel for the first time. I was surprised then of seeing how strong he looked and was, for he carried my suitcase on his shoulders from terminal to terminal at the airport; an effort that I could hardly think, yet it seemed so easy for him.

Since then I met him several times, the last one in Barcelona in 1979, where I took some pictures. The one enclosed was taken at the Plaza San Felipe Neri near the cathedral; against those walls were executed thousand, of our brothers as you can still see the bullet impact in the wallstones.[2] It was then, for both of us, a symbolic moment because in [it] brought back memories and intensified our feelings.

It was the feelings of the past struggle ever present in today’s battle; something that can hardly be understood by people that have not lived engaged in a fight like our movement carried on in Spain.

Miguel bade me farewell two days later at the Estacion de Francia that was to be the last embrace. Sadness could not express the emotion upon the lost [loss] of our good comrade for not only ourselves are loosing some part of our own but the whole mankind is being deprived the efforts of a MAN that fought for the realities of FREEDOM. And even if freedom might not be a reality, as long as there is a man that feels in himself the need to be free the fight for freedom will go on. If we ever could need a symbol, Miguel might be the one to look at. But we do not need one for it should be enough just carry into ourselves the memory of his personality, his batlas [battles], his spirit of solidarity and to keep on fighting… The continuity is on taking over for the ones we lost, that he did. This we have to do…

I was last Nov in Barcelona but Edo [3] told me Miguel was in London. I intended to go there for a couple of days, mainly to have the opportunity to see you; but did not have enough time. Perhaps we will have a chance to meet in the future.

Enclosed is an overseas money order for $100.00 Canadian. This is a donation from Grupo Libertad for the production of the TRIBUTE TO MIGUEL GARCIA.[4]

Ours is a small group, only three; but we keep together and do what we can.[5]

Well, dear Albert, Sancho Panza as Miguel refered to you, I wish the publishing goes on soon.

David Watson’s tribute to Federico is at: http://www.fifthestate.org/archive/395-winter-2016…

, Edo: see Luis Andrés Edo : Anarchist activist whose life was dedicated to the ‘Idea’ and the struggle for liberty by Stuart Christie http://www.katesharpleylibrary.net/xd26cp

5, The other surviving members of Grupo Libertad were Lorenzo Albas (September 5, 1899-March 28, 1993), 94 years old, and Agustina Riberas, (partner of Francisco Riberas) who died aged 99. Both were mentioned in a notice Federico sent to Spain, published in CNT No. 58, February 1994: “They are the last vestige of what was the respected Grupo Libertad,”.

Thanks for sending this – I appreciate it. I never met Arcos but I was aware of him from Miguel and Albert. I might have met him, but was otherwise detained by Her Majesty, when he visited Barcelona in 1979. I last saw Miguel in June 1981, when I was recently out of the nick, and he was trying hard to persuade me to go and live in Barcelona. He couldn’t quite understand that the conditions of my release on parole meant that I had to sign-on regularly with a probation officer in Birmingham for two years. Unfortunately he died in the December of the same year. Terrible.

Sorry for not acknowledging receipt of the Albert memorial and the Bayer book [ Rebellion in Patagonia]. I find these days if I don’t write straight away I don’t write. But I think the Memorial turned out fine. The small format suits it. I like the way the pictures were reproduced. And now I guess we know (from the letter to Albert) that it was Arcos who took the picture of Miguel in front of the wall with bullet strikes in Barcelona that is attributed to Stuart. The only gripe I have is PLEASE, PLEASE, PLEASE…. don’t print anything else in red type on black background – it drives me nuts! Very hard to read.

I’m actually still (slowly) reading Chris Ealham’s marvelous book on Peirats.[1] I can’t praise it enough – one of the best things I’ve read for a long time! It’s so great to find a history book that is so well written, well researched and absorbing at the same time – and says something intelligent. I think Ealham does a great job of presenting the events and arguments within the Spanish movement clearly and objectively. […] It really is a great book.

I’d be glad if you do reproduce the Arcos letter about Miguel. Miguel is really one of the unsung heroes of the anarchist movement in Europe (not only Spain). His impact on my generation of anarchist activists was immeasurable.

I’m glad some of Fede’s archive is now in the Labadie. I believe the bulk of the material went to Valencia.[2]

Please thank Phil Ruff for his kind words about my book. It’s always reassuring and inspiring when someone appreciates my work. […]

As for Fede, I concur with so many who knew him that he was an inspirational guy. What always impressed me and moved me was his drive and energy, his loyalty and his unerring commitment to the past and to the historical memory of the movement to which he dedicated his life.

Thanks to Julie Herrada, and David Watson for info on Grupo Libertad