The Greatest Train Robbery in History: “the Resistance Hold-Up” 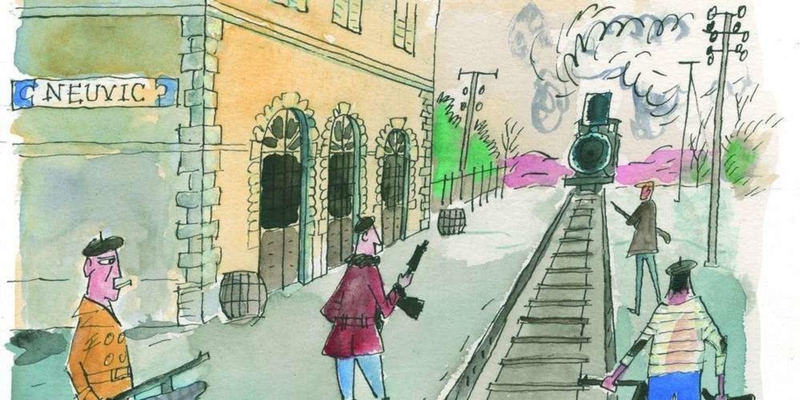 The little-known raid on the Neuvic train by the French resistance involved several Spanish guerrillas and the proceeds would be the equivalent to 400 million euros.

I cannot get over my surprise. I consider myself a great monitor of all the folk who opted to go underground and who turned on states and broke the rules, robbing banks and making off with huge fortunes and I am delighted if there was a political or social angle to the matter; but it turns out that I knew nothing of the biggest train robbery in history.

Some claim that – the greatest train robbery in history! On the internet, I searched for a list of the ten biggest coups pulled off, but today’s is not even mentioned. But if we go by its proceeds, it stands well in the lead in the No 1 position. Besides, if we look a bit closer and see who carried out the robbery and who the victims were, things look even brighter.

Now for acknowledgments. I owe a debt to the journalist and writer Evelyn Mesquida. The very same woman who revived memories of the Spaniards from “La Nueve”, the men who liberated Paris in August 1944, many of them anarchists. Now Evelyn has gone a step further with a new book entitled Y ahora, volved a vuestras casas (And Now, Return to Your Homes). No random title that, as those were the words with which De Gaulle dismissed the Spanish resistance members once they had liberated much of the south of France. Evelyn’s new book focuses on these men and women who had arrived from Spain fleeing from Francoist terror and who, once on French soil, joined the French Resistance.

Among the plentiful, interesting information she came across in her research, she stumbled upon the “Neuvic train raid”. On which we shall be focusing today.

It all started in the late spring of 1944. The Nazis were losing the war, but still controlled huge swathes of Europe and the occupied territories included France. The German navy (the Kriegsmarine) requisitioned a huge shipment of funding from French coffers. The money it wanted was under guard in Périgueux in the Dordogne department and was due to be shipped to Bordeaux, where the estuary was used by the Nazis as an important naval base. Thanks to a leak from the prefect of the Dordogne, Jean Gallard, the resistance discovered exactly when the transfer was due to be made and where; it involved the not insignificant sum of 2,280 million francs, rather more than 400 million of today’s euros. Yes, you read that correctly … upwards of 400 million euros.

Neither the Glasgow train robbery nor the raid on the Antwerp diamond quarter came anywhere close to that value. In fact, what is usually regarded as the biggest robbery in history, the raid on the Isabella Steward Gardener Museum in Boston, from which 13 Rembrandt, Vermeer and Degas paintings were stolen, was estimated at 300 million dollars, about half of what was stolen in Neuvic. Although, to be true to the historical record, there was a bigger raid, one in which the loot stood at 1,000 million dollars. But that was a stroke pulled off without any hold-up; it merely lacked any presidential order. All of those millions were removed by Saddam Hussein and his son from the Central Bank in Baghdad. When Saddam’s palace was raided some time later, 650 of those millions were found, but the whereabouts of the remainder is still unknown.

But I digress. Back to the matter in hand. It turns out that the Dordogne department was a location that was home to plenty of active resistance groups, up to 140 of them. And prominent among said groups there was a presence of Spanish guerrillas (a goodly number of libertarians among them), especially in the Carlos group, the Belbés maquis, the Firbeix-Sarland FTP group, the MOI [Main-d’œuvre Immigrée] group in Mazeyrolles, the Pinocho group, the Fraicherode maquis, the Bir-Hakeim group, the Saint Martin d’Astier group, the Martínez MOI group, the Roland group and especially in the biggest group of them all, the Soleil group.

We are aware of the presence of several Spaniards who fought in the Roland group during the raid; they included the anarchist Pedro Alba. In fact it was members of that group that took care of the passengers, the station staff, unloading of the money bags and transferring them to trucks. Meanwhile, the Valmy, Ancel and Paul-Henry groups watched over the itinerary and the access roads to the station.

Members of the Roland group, headed by Roland Clee entered Neuvic railway station on 26 June 1944, taking it over and holding any workers found inside. At 19.36, lookouts reported that the convoy was approaching. At 19.38 the train drew to a stop and Roland and his men boarded it. Passengers were instructed to remain on board and to leave all doors and windows closed. When they boarded the locomotive, the engine-driver, unable to hold back from grinning told them “first carriage”.

Roland’s men boarded the unmarked carriage and disarmed the guards in charge. The money carriage was unhitched from the remainder of the convoy and taken to a shed where two lorries that the resistance had brought along were waiting for it. Meanwhile, two men from the group stayed in the station-master’s office, partly to keep an eye on the staff, as well as to get them to phone through to the Germans telling them that the train would be somewhat behind schedule. At 19.45 they started unloading the 150 money bags, each of them weighing about 40 kilos and valued at 15,200,000 francs. Six men from the group busied themselves with loading up the lorries, which took them about 15 minutes, bringing the time to 20.00 hours. That done, the members of the Roland group boarded the lorries and left the station, the remainder of the groups proving them with cover. As they left, two cash bags fell on the ground, but one of the staff tipped off the driver and they were reloaded on to the lorry.

Once outside of the town, members of another three maquis groups monitored the road inter-sections and kept watch as the lorries headed for the forests harbouring the guerrillas. Everything had passed off well thus far, but there was a hairy moment about 15 kilometers from Neuvic one of the lorries broke down and simply would not start up again. So, in the middle of the highway they had to transfer the 75 cash-bag cargo to the other lorry, which was overloading it hugely.

We have Pedro Alba’s own description of some of what he remembered of the raid: “We pulled the operation off without bloodshed, thanks to a stroke of daring and a level head”. And “We handed the entire haul over to the command post. I remember that because they never as much as said thanks to us. All we got was a cold: Leave that there; and now you can go.”

Whilst everything had thus far gone to perfection and had a happy outcome, the money trail turns cold from that point on. Some books refer to its being shared out between the various groups, but naturally there is nothing to confirm that. It is also said that once it left the two lorries, the swag was out of the control of the resistance, albeit that there some talk of mansions and even of brand-new maquis groups’ being formed on the basis of the cash.

There was further upset the very next day when, acting on a tip-off, the Nazis raided the little village of Espinasse where some of the Roland group’s men were in hiding. The upshot was 30 dead, what with resistance members and local residents. The hamlet was later put to the torch. A high price to pay for such effrontery.

In September 1944, prefect Callard was dismissed, although it was not long before he secured fresh office. A lot of reports were drawn up regarding the investigations, enquiries and interrogations carried out afterwards, although it looks as if a lot of those reports simply went missing. As did the bulk of the cash. According to Evelyn Mesquida, by 1945 the French state had recovered just 35% of the swag … but that is matter for a separate article. For the moment I might say that all the books and research into the affair are agreed on one point: that none of the guerrillas involved in the raid wound up rich, nor did they pocket a single penny.